Ashok Leyland is an Indian automobile manufacturing company headquartered in Chennai, India. Founded in 1948, it is the 2nd largest commercial vehicle manufacturer in India, 4th largest manufacturer of buses in the world and 16th largest manufacturer of trucks globally. Operating six plants, Ashok Leyland also makes spare parts and engines for industrial and marine applications. It sells about 60,000 vehicles and about 7,000 engines annually. It is the second largest commercial vehicle company in India in the medium and heavy commercial vehicle (M&HCV) segment with a market share of 28% (2007–08). With passenger transportation options ranging from 19 seaters to 80 seaters, Ashok Leyland is a market leader in the bus segment. The company claims to carry more than 60 million passengers a day, more people than the entire Indian rail network. In the trucks segment Ashok Leyland primarily concentrates on the 16 ton to 25 ton range of trucks. However Ashok Leyland has presence in the entire truck range starting from 7.5 tons to 49 tons. With a joint venture with Nissan Motors of Japan the company made its presence in the Light Commercial Vehicle (LCV) segment (<7.5 tons).

Ashok Leyland's UK subsidiary Optare has shut down its bus factory in Blackburn, Lancashire.[3] This subsidiary's traditional home in Leeds has also been vacated in favour of a purpose built plant at Sherburn-in-Elmet.

Ashok Motors was founded in 1948 by Raghunandan Saran, an Indian freedom fighter from Punjab.[4] After Independence, he was persuaded by India’s first Prime Minister Nehru, to invest in modern industrial venture. Ashok Motors was incorporated in 1948 as a company to assemble and manufacture Austin cars from England, and the company was named after the founder's only son Ashok Saran. The company had its headquarters in Rajaji Saalai, Chennai (then Madras) with the plant in Ennore, a small fishing hamlet in the North of Chennai. The Company was engaged in assembly and distribution of Austin A40 passenger cars in India.

The collaboration ended sometime in 1975 but the holding of British Leyland, now a major British Auto Conglomerate as a result of several mergers agreed to assist in technology which continued until the 1980s. Post 1975, changes in management structures saw the company launch various advanced vehicles and pioneering innovations in the Indian market, with many of these models continuing to this day with numerous upgrades over the years.

Under Iveco and Hinduja partnership

In 1987, the overseas holding by Land Rover Leyland International Holdings Limited (LRLIH) was taken over by a joint venture between the Hinduja Group, the Non-Resident Indian transnational group and IVECO, part of the Fiat Group. Ashok Leyland’s long-term plan to become a global player by benchmarking global standards of technology and quality was soon firmed up. Access to international technology and a US$200 million investment programme created a state-of-the-art manufacturing base to roll out international class products.

In 2007, the Hinduja Group also bought out IVECO's indirect stake in Ashok Leyland. The promoter shareholding now stands at 51%. Today the company is the flagship of the Hinduja Group, a British-based and Indian originated trans-national conglomerate after Hindujas bought Iveco’s remaining ownership stakes.

An Ashok Leyland BEST bus in Mumbai. This bus has the Hino Engine.

Early products included the Leyland Comet bus which was a passenger body built on a truck chassis sold in large numbers to many operators in India. By 1963, the Comet was operated by every State Transport Undertaking in India, and over 8,000 were in service. It was soon joined in production by a version of the Leyland Tiger.

During early 80's Ashok Leyland entered into a collaboration with Japanese company Hino Motors from whom technology for the H-series engines was sourced. Many indigenous versions of H-series engine were developed with 4 and 6 cylinders and also conforming to BS2, BS3 & BS4 emission standards in India. These engines proved to be extremely popular with the customers primarily for their excellent fuel efficiency. Most current models of Ashok Leyland come with H-series engines.

In late 1980s Iveco investment and partnership resulted in Ashok Leyland launching the 'Cargo' range of trucks based on European Ford Cargo trucks. The Cargo entered production in 1994, at Ashok Leyland's new plant in Hosur, southeast of Bengaluru.[5] These vehicles used Iveco engines and for the first time had factory-fitted cabs. Though the Cargo trucks are no longer in production and the use of Iveco engine was discontinued, the cab continues to be used on the Ecomet range of trucks as well as for several of Ashok Leyland's military vehicles. 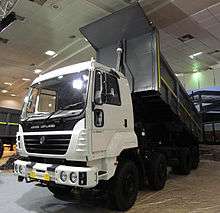 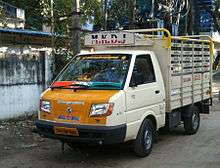 Ashok Leyland, announced sale of vehicles on the new U-Truck platform from November 2010 with the rolling out of the first set of 10 models of tippers and tractor trailers in the 16 – 49-tonne segment. Further, another 15 models are set to enter the market in the next 12 months.

The Dost is a 1.25 ton light commercial vehicle (LCV) that is the first product to be launched by the Indian-Japanese commercial vehicle joint venture Ashok Leyland Nissan Vehicles. Dost is powered by a 58 hp high-torque, 3-cylinder, turbo-charged Common Rail Diesel engine and has a payload capacity of 1.25 Tonnes. It is available in both BS3 and BS4 versions. The bodywork and some of the underpinnings relate to Nissan's C22 Vanette of the 1980s; this is most visible in the door design. The LCV is being produced in Ashok Leyland's Hosur plant in Tamil Nadu. The LCV is available in three versions with the top-end version featuring air-conditioning, power steering, dual-colour of a beige-gray trim and fabric seats. With the launch of Dost Ashok Leyland has now entered the Light Commercial Vehicle segment in India[7][8][9][10][11]

Furthermore, in June 2009 the company expanded into the fastest growing construction equipment segment, with a 50:50 joint venture with John Deere. Floated as separate entity under the name of Leyland – Deere Limited.[16]

In 2007, the company announced a joint venture with Japanese auto giant Nissan (Renault Nissan Group) which will share a common manufacturing facility in Chennai, India. The shareholding structures of the three joint venture companies are:

Dr. V. Sumantran, Executive Vice Chairman of Hinduja Automotive Limited and a Director on the Board of Ashok Leyland is the Chairman of the Powertrain company and he is on the Boards of the other two JV companies. The venture, once it takes off, will be one of the largest investments made in automotive field in the country 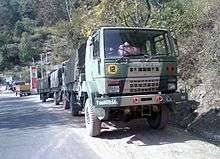 An Indian road-mobile launcher with a ballistic missile

A Lanka Ashok Leyland bus in Sri Lanka in 2013

Lanka Ashok Leyland (LAL) in Sri Lanka was formed in 1982 and started its operations in 1983 as a Joint venture between Lanka Leyland Ltd (a wholly owned company of Government of Sri Lanka) and Ashok Leyland Ltd India. LAL imports commercial vehicles in both knock down kits or fully built and carries out assembly operations, repair and service, body building on chassis.[19]

In October 2006, Ashok Leyland bought a large stake in the Czech-based- Avia, later renaming as Avia Ashok Leyland Motors s.r.o., to gain entry into the competitive European market. But prolonged recession in Europe forced to shut down the Czech operations in 2013.

In 2010 Ashok Leyland acquired a 26% stake in the British bus manufacturer Optare, a company based on the premises of a former British Leyland subsidiary C.H. Roe. In December 2011 Ashok Leyland increased its stake in Optare to 75.1%. 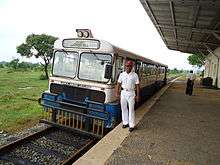 The history of the company has been punctuated by a number of technological innovations, which have since become industry norms. It was the first to introduce multi-axled trucks, full air brakes and a host of innovations like the rear engine and articulated buses in India. In 1997, the company launched the country’s first CNG bus and in 2002, developed the first Hybrid Electric Vehicle.

Ashok Leyland was already producing low-emission vehicles. Back in 1980s and 90s, Ashok Leyland with various Tamil Nadu Transport Corporatiopn, notably Cholan Roadways Corporation based in Trichripally experimented with low pollutant emission based on the CNG technology. In 2002 it developed the first hybrid electric vehicle. Ashok Leyland has also launched a mobile emission clinic that operates on highways and at entry points to New Delhi. The clinic checks vehicles for emission levels, recommends remedies and offers tips on maintenance and care. This work will help generate valuable data and garner insight that will guide further development.

Ashok Leyland has also developed Hythane engines in association with the Australian company Eden Energy. Ashok Leyland successfully developed a 6-cylinder, 6-litre (370 cu in) 92 kW (123 hp) BS-4 engine which uses Hythane (H-CNG,) which is a blend of natural gas and around 20% of hydrogen. Hydrogen helps improve the efficiency of the engine but the CNG aspect makes sure that emissions are at a controlled level. A 4-cylinder 4-litre (240 cu in) 63 kW (84 hp) engine is also being developed for H-CNG blend in a joint R&D program with MNRE (Ministry of New and Renewable Energy) and Indian Oil Corporation.

The CNG concept is now in full swing, with more than 5,500 of the technology’s vehicles running around Delhi. The company is also already discussing the wide-scale use of Hythane engines with the Indian government. Hythane engines may be expected in the near future.

Ashok Leyland’s partnership with Nissan is also focusing on vehicle, powertrain, and technology development listed under three joint ventures. With impressive investment, the joint ventures will focus on producing trucks with diesel engines that meet Euro 3 and Euro 4 emission standards.

Ashok Leyland announced iBUS in the beginning of 2008, as part of the future for the country's increasingly traffic-clogged major cities. Its Rs 60-lakh, iBus, a feature-filled, low-floor concept bus for the metros revealed during the Auto Expo 2008 in India this low-floored iBus will have the first of its kind features, including anti-lock braking system, electronic engine management and passenger infotainment. The executive class has an airline like ambience with wide LCD screens, reading lights, audio speakers and, for the first time, Internet on the move. A GPS system enables vehicle tracking and display of dynamic route information on LCD screens, which can also support infotainment packages including live data and news. The bus will probably be equipped with an engine from the new Neptune family, which Ashok Leyland also introduced at this exhibition, which are ready for the BS4/Euro 4 emission regulations and can be upgraded to Euro 5.[20] The ibus of Ashok leyland have hybrid technology 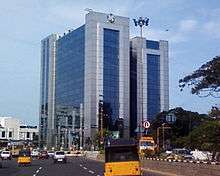 The company has also maintained its profitable track record for 60 years. The annual turnover of the company was USD 1.7 billion in 2013-14. Selling 89,342 medium and heavy vehicles in 2013-14, Ashok Leyland is India's largest exporter of medium and heavy duty trucks. It is also one of the largest private sector employers in India - with about 12,000 employees working in 6 factories and offices spread over the length and breadth of India.

In 2013-14, the company posted a very modest profit after tax of Rs. 290million which was made possible after selling of real estate and other surplus land and related assets. The company has not declared any dividend for the financial year 2013-14, which is also a first in its 60-year history.

The company has increased its rated capacity to 105,000 vehicles per annum. Further investment plans include putting up two new plants - one in Uttarakhand in North India and a bus body building unit in middle-east Asia are fast afoot. It already has a sizeable presence in African countries like Nigeria, Ghana, Egypt and South Africa.

Ashok Leyland Factory near Ennore as seen from a train

Ashok Leyland's Technical Centre, at Vellivoyalchavadi (VVC) in the outskirts of North Chennai near Minjur, is a state-of-the-art product development facility, that apart from modern test tracks and component test labs, also houses India's one and only Six Poster testing equipment. 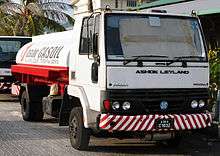 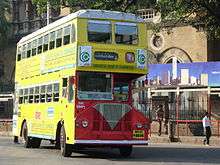 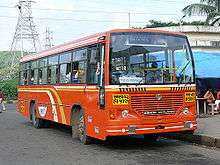 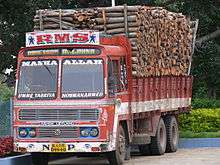 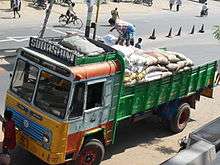 A TSRTC city bus in Hyderabad