For other uses, see Courier (disambiguation).

A courier is a person who delivers messages, packages, and mail.

Couriers are distinguished from ordinary mail services by features such as speed, security, tracking, signature, specialization and individualization of express services, and swift delivery times, which are optional for most everyday mail services. As a premium service, couriers are usually more expensive than standard mail services, and their use is normally limited to packages where one or more of these features are considered important enough to warrant the cost.

Courier services operate on all scales, from within specific towns or cities, to regional, national and global services. Large courier companies include DHL, OCS, FedEx, EMS International, TNT, UPS, and Aramex. These offer services worldwide, typically via a hub and spoke model.

Before the industrial era 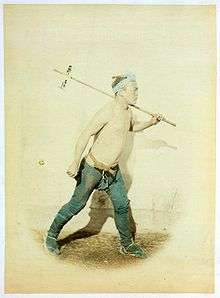 Courier or postman, Japan, hand-coloured albumen print by Felice Beato, between 1863 and 1877 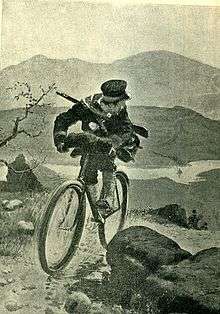 In ancient history, runners, homing pigeons and riders on horseback used to deliver timely messages. Before the introduction of mechanized courier services, foot messengers physically ran miles to their destinations. As of 2016 there are marathons, based on the Ancient Greek semi-historical narrative of Pheidippides, who is said to have been the runner bringing the news of the Greek victory over the Persians from Marathon to Athens in 490 BCE. In the Middle Ages, royal courts maintained their own messengers who were paid little more than common labourers.

In cities, there are often bicycle couriers or motorcycle couriers but for consignments requiring delivery over greater distance networks, this may often include lorries, railways and aircraft.

Many companies who operate under a Just-In-Time or "JIT" inventory method often use on-board couriers (OBCs). On-board couriers are individuals who can travel at a moment's notice anywhere in the world, usually via commercial airlines. While this type of service is the second costliest—general aviation charters are far more expensive—companies analyze the cost of service to engage an on-board courier versus the "cost" the company will realise should the product not arrive by a specified time (an assembly line stopping, untimely court filing, lost sales from product or components missing a delivery deadline, organ transplants).

International courier services in China include TNT, EMS International, DHL, OCS, FedEx and UPS. These companies provide nominal worldwide service for both inbound and outbound shipments, connecting China to countries such as the USA, Australia, United Kingdom, and New Zealand. Of the international courier services, the Dutch company TNT is considered to have the most capable local fluency and efficacy for third- and fourth- tiered cities. EMS International is a unit of China Post, and as such is not available for shipments originating outside of China.

Domestic courier services include SF Express, YTO Express (圆通), E-EMS (E邮宝) and many other operators of sometimes microscopic scales. E-EMS, is the special product of a co-operative arrangement between China Post and Alipay, which is the online payment unit of Alibaba Group. It is only available for the delivery of online purchases made using Alipay.

The genus of the UK sameday courier market stems from the London Taxi companies but soon expanded into dedicated motorcycle despatch riders with the taxi companies setting up separate arms to their companies to cover the courier work. During the late 1970s small provincial and regional companies were popping up throughout the country. Today, there are many large companies offering next-day courier services, including City Link Ltd, DX Group, The Courier Company, UKMail, APC Overnight and UK divisions of worldwide couriers such as FedEx, OCS, DHL, UPS and TNT City Sprint.

There are many 'specialist' couriers usually for the transportation of items such as freight/palettes, sensitive documents and liquids.

The 'Man & Van'/Freelance courier business model, is highly popular in the United Kingdom, with thousands upon thousands of independent couriers and localised companies, offering next-day and same day services. This is likely to be so popular because of the low business requirements (a vehicle) and the lucrative number of items sent within the UK every day. However, since the dawn of the electronic age the way in which businesses use couriers has changed dramatically. Prior to email and the ability to create PDFs, documents represented a significant proportion of the business. However, over the past 5 years documentation revenues have decreased by 50 percent. In addition customers are also demanding more from their courier partners. Therefore, a shift where, more and more, organisations prefer to use the services of larger organisations who are able to provide more flexibility and levels of service is being witnessed which has led to another level of courier company, the regional couriers. This is usually one of the local companies who have expanded to more than one office to cover an area.

Royal Mail was up until recently a reasonable competitor of most of the large couriers; offering next day and special delivery services. This has however changed, with higher costs, strike action and a lowering public perception of the company. With companies like Royal Mail, it can be difficult to draw a clear-cut line between postal services and couriers.

Some UK couriers offer next-day services to other European countries. FedEx offers next-day air delivery to many EU countries. Cheaper 'By-Road' options are also available, varying from 2 days delivery time (such as France), to up to a week (former USSR countries).

Large couriers often require an account to be held (and this can include daily scheduled collections). Senders are therefore primarily in the commercial/industrial sector (and not the general public); some couriers such as DHL do however allow public sending (at higher cost than regular senders).

In recent years, the increased popularity of Black Friday in the UK has placed some firms under operational stress.[1]

The courier industry has long held an important place in United States commerce and been involved in pivotal moments in the nation's history such as westward migration and the gold rush. Wells Fargo was founded in 1852 and rapidly became the preeminent package delivery company. The company specialised in shipping gold, packages and newspapers throughout the West, making a Wells Fargo office in every camp and settlement a necessity for commerce and connections to home. Shortly afterward, the Pony Express was established to move packages more quickly than the traditional stagecoach. It illustrated the demand for timely deliveries across the nation, a concept that continued to evolve with the railroads, automobiles and interstate highways and which has emerged into today's courier industry.

The courier industry in the United States is a $59 billion industry, with 90% in 2009 of the business shared by four companies, including DHL, OCS, FedEx, UPS and USA Couriers. On the other hand, local courier carrier and delivery services were highly diversified and tended to be smaller operations; the top 50 firms accounted for just a third of the sector's revenues.

The main courier services available in Ireland as alternatives to the national An Post system are DHL, UPS, TNT, SnapParcel and FedEx.

The courier business in Australia is a very competitive industry and is mainly concentrated in the high population areas in and around the capital cities. With such a vast mass of land to cover the courier companies, including OCS, DHL, DTDC AUSTRALIA tend to transport either by air or by the main transport routes and national