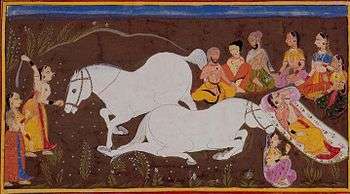 illustration of the Ramayana by Sahib Din, 1652. Kausalya is depicted slaying the horse (left) and lying beside it (right).

The Ashvamedha (Sanskrit: अश्वमेध aśvamedhá) is a horse sacrifice ritual followed by the Śrauta tradition of Vedic religion. It was used by ancient Indian kings to prove their imperial sovereignty: a horse accompanied by the king's warriors would be released to wander for a period of one year. In the territory traversed by the horse, any rival could dispute the king's authority by challenging the warriors accompanying it. After one year, if no enemy had managed to kill or capture the horse, the animal would be guided back to the king's capital. It would be then sacrificed, and the king would be declared as an undisputed sovereign. 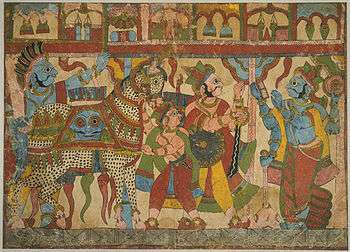 A 19th century painting, depicting the preparation of army to follow the sacrificial horse. Probably from a picture story depicting Lakshmisa's Jaimini Bharata

A stallion is selected and released for a year of wandering in the company of a hundred or more warriors. The king remains at home and turns over rulership to the adhvaryu priest who makes daily ghee libations into a footprint of the absent horse. The hotr priest recites evening narrations of the exploits of past kings.[1] The release of the horse is considered an invitation to dispute the authority of the king. If the horse wanders into a territory controlled by someone who doesn't recognize the authority of the king, the rivals challenge the invading warriors accompanying the horse.[2] After almost a year the horse is guided home, if no defending army has managed to kill or capture it.[1]

Soma pressings and various animal sacrifices are performed during the building of a great altar. The four major priests symbolically receive the four quarters of space and the four royal queens. On the second of three pressing days, the horse, a hornless goat and gayal are dedicated to Prajapati. Other animals are dedicated to a variety of deities. Three of the queens wash the horse and adorn it with jewelry and ghee.[3] The horse, hornless goat, and gayal are asphyxiated. The chief queen lies down and the adhvaryu guides the horse's penis against the queen's vagina, signifying the birth of a new king.[4][5] The animals are dismembered. The king ascends the throne while the Purusha Sukta is recited.[5]

The adhvaryu takes the dismembered parts of the three chief animals and assembles them on the ground with the head of the goat facing west, the other two animals facing east. All the parts are then offered into the ahavaniya. The adhvaryu makes three additional offerings into the gayal’s throat, on the right front hoof of the horse, and into an iron bowl.[5] A final offering is made using a leper who stands in water as an altar.[6] 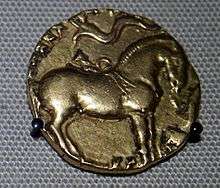 An Ashwamedha coin of Kumaragupta, who performed the sacrifice in 5th century CE

The historical performers of Ashvamedha include:

The earliest recorded criticism of the ritual comes from the Cārvāka, an atheistic school of Indian philosophy that assumed various forms of philosophical skepticism and religious indifference. A quotation of the Cārvāka from Madhavacharya's Sarva-Darsana-Sangraha states: "The three authors of the Vedas were buffoons, knaves, and demons. All the well-known formulae of the pandits, jarphari, turphari, etc. and all the obscene rites for the queen commanded in Aswamedha, these were invented by buffoons, and so all the various kinds of presents to the priests, while the eating of flesh was similarly commanded by night-prowling demons."[21]

Griffith (1899) omits verses VSM 23.20–31 (the ritual obscenities), protesting that they are "not reproducible even in the semi-obscurity of a learned European language" (alluding to other instances where he renders explicit scenes in Latin rather than English). A. B. Keith's 1914 translation also omits verses.[22]

This part of the ritual offended the Dalit reformer and framer of the Indian constitution B. R. Ambedkar and is frequently mentioned in his writings as an example of the perceived degradation of Brahmanical culture.[23]

While others such has Manohar L. Varadpande, praised the ritual as "social occasions of great magnitude".[24] Rick F. Talbott writes that "Mircea Eliade treated the Ashvamedha as a rite having a cosmogonic structure which both regenerated the entire cosmos and reestablished every social order during its performance."[25]

In the Arya Samaj reform movement of Dayananda Sarasvati, the Ashvamedha is considered an allegory or a ritual to get connected to the "inner Sun" (Prana)[26] According to Dayananda, no horse was actually to be slaughtered in the ritual as per the Yajurveda. Following Dayananda, the Arya Samaj disputes the very existence of the pre-Vedantic ritual; thus Swami Satya Prakash Saraswati claims that

the word in the sense of the Horse Sacrifice does not occur in the Samhitas [...] In the terms of cosmic analogy, ashva s the Sun. In respect to the adhyatma paksha, the Prajapati-Agni, or the Purusha, the Creator, is the Ashva; He is the same as the Varuna, the Most Supreme. The word medha stands for homage; it later on became synonymous with oblations in rituology, since oblations are offered, dedicated to the one whom we pay homage. The word deteriorated further when it came to mean 'slaughter' or 'sacrifice'.[27]

He argues that the animals listed as sacrificial victims are just as symbolic as the list of human victims listed in the Purushamedha.[27] (which is generally accepted as a purely symbolic sacrifice already in Rigvedic times).

All World Gayatri Pariwar since 1991 has organized performances of a "modern version" of the Ashvamedha where a statue is used in place of a real horse, according to Hinduism Today with a million participants in Chitrakoot, Madhya Pradesh on April 16 to 20, 1994.[28] Such modern performances are sattvika Yajnas where the animal is worshipped without killing it,[29] the religious motivation being prayer for overcoming enemies, the facilitation of child welfare and development, and clearance of debt,[30] entirely within the allegorical interpretation of the ritual, and with no actual sacrifice of any animal.