For other uses, see Varuna (disambiguation).

Varuna (/ˈvɜːrʊnə, ˈvɑːrə-/;[1] Sanskrit: Varuṇa वरुण, Malay: Baruna) is the Hindu god of water and the celestial ocean, as well as a god of law of the underwater world. A Makara is his mount. His consort is the Hindu goddess Varuni. Originally the chief god of the Vedic pantheon, Varuna was replaced by Indra and later faded away with the ascendancy of Shiva and Vishnu.[2][3][4] 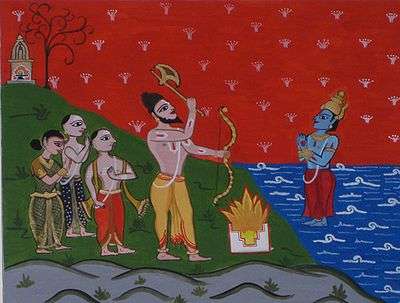 Varuna and Mitra are the gods of the societal affairs including the oath, and are often twinned Mitra-Varuna (a dvandva compound). Varuna is also twinned with Indra in the Rigveda, as Indra-Varuna (when both cooperate at New Year in re-establishing order[5]).

The Rigveda and Atharvaveda[6] portrays Varuna as omniscient, catching liars in his snares.

Both Mitra and Varuna are classified as Asuras in the Rigveda (e.g. RV 5.63.3), although they are also addressed as Devas as well (e.g. RV 7.60.12). Varuna, being the king of the Asuras, was adopted or made the change to a Deva after the structuring of the primordial cosmos, imposed by Indra after he defeats Vrtra.[7]

Vedic Varuna is sometimes thought to be a reflex of the same Proto-Indo-European theonym as Greek Ouranos, based on similarities between both names and the respective gods' attributes, but no successful derivation has yet been produced that is consistent with known laws of sound change.[8] 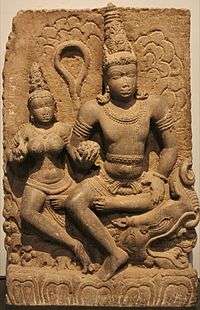 Varuna with Varunani. Statue carved out of basalt, dates back to 8th century CE, discovered in Karnataka. On display at the Prince of Wales museum, Mumbai. 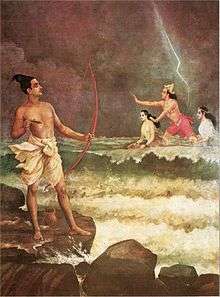 Faced with the dilemma of how to cross the ocean to Lanka, where his abducted wife Sita is held captive by the demon king Ravana, Rama (an Avatar of Vishnu) performs a penance (tapasya) to Varuna, the Lord of Oceans, fasting and meditating in perfect dhyana for three days and three nights. Varuna does not respond, and Rama arises on the fourth morning, enraged by the God's arrogance. With his bow and arrow, he angrily begins attacking the oceans with celestial weapons—burning up the waters and killing its life and creatures. The Vanaras (Monkeys) are dazzled and fearful at witnessing the enraged Rama demolish the oceans, and his brother, Lakshmana, prays to calm Rama's mind. Just as Rama invokes the brahmastra, considered the most powerful weapon capable of destroying all creation, Varuna arises out of the oceans. He bows to Rama, explaining that he himself was at a loss to answer Rama's question. Begging him not to destroy the oceans with the missile, he suggests that Rama re-direct the weapon at a demonic race that lives in the heart of the ocean. Rama's arrows destroys the demons, and establishes a purer, liberated environment there. Varuna promises that he would keep the oceans still for all of Rama's army to pass, and Nala constructs a bridge (Rama's Bridge) across to Lanka. Rama justifies his angry assault on the oceans as he followed the correct process of petitioning and worshipping Varuna, but obtaining the result by force for the greater good.[9] 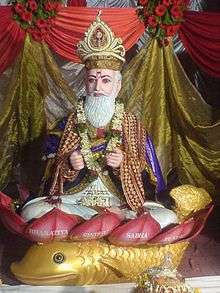 Jhulelal, an incarnation of Varuna is the chief deity worshipped by Sindhi Hindus.

Also unrelated to Vedic Varuna are Avestan Vourukasha and Varena. The former is the Avesta's mythological sea that covers the earth, while Varena is a mythological four-cornered fourteenth region of the world.

In the Buddhism of the Far East, Varuna is one of the twelve Devas, as guardian deities, who are found in or around Buddhist shrines (Jūni-ten, 十二天).[10] In Japan, Varuna had been called "Suiten" in Japanese Buddhism.[11] Varuna joins these other eleven Devas of Buddhism, found in Japan and other parts of southeast Asia: Indra (Taishaku-ten), Agni (Ka-ten), Yama (Emma-ten), Nirrti (Rasetsu-ten), Vayu (Fu-ten), Ishana (Ishana-ten), Kubera (Tamon-ten), Brahma (Bon-ten), Prithvi (Chi-ten), Surya (Nit-ten), Chandra (Gat-ten).[12][13]

Varuna's Shinto shrine is Suitengū (Tokyo). He is deified there. The meaning of suiten-gū is a shrine of Varuna. After Shinbutsu bunri the separation of Shinto deities from Buddhist deities, Varuna was changed to Amenominakanushi.[14]