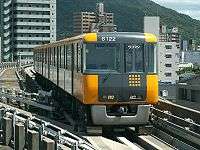 Hiroshima New Transit Line 1 (広島新交通1号線, Hiroshima Shin Kōtsū 1-gō-sen), also known as the Astram Line (アストラムライン, Asutoramurain), is a rubber-tired transit system operated by Hiroshima Rapid Transit in Hiroshima, Japan. Astram opened August 8, 1994 for the 1994 Asian Games in Hiroshima. The line connects between central Hiroshima and Hiroshima Big Arch, which was the main stadium of the Asian Games. On March 14, 2015, a new station, Shin-Hakushima, opened to make a new connection between the Astram Line and JR lines. An extension west to Nishi-Hiroshima Station is currently being planned.