Tokyo Metropolitan Bureau of Transportation (東京都交通局, Tōkyō-to Kōtsū-kyoku), also known as Toei (都営),[Note 1] is one of two rapid transit systems which make up the Tokyo subway system, the other being Tokyo Metro.

The Toei Subway (都営地下鉄, Toei chikatetsu) lines were originally licensed to the Teito Rapid Transit Authority (the predecessor of Tokyo Metro) but were constructed by the Tokyo Metropolitan Government following transfers of the licenses for each line. The subway has run at a financial loss for most of its history due to high construction expenses, particularly for the Oedo Line. However, it reported its first net profit of ¥3.13bn in FY 2006.

Tokyo Metro and Toei trains form completely separate networks. While users of prepaid rail passes can freely interchange between the two networks, regular ticket holders must purchase a second ticket, or a special transfer ticket, to change from a Toei line to a Tokyo Metro line and vice versa. The sole exception is on the segment of the Toei Mita Line between Meguro and Shirokane-Takanawa, where the platforms are shared with the Tokyo Metro Namboku Line and it is therefore possible to change between the networks without passing through a ticket gate.

Through services to other lines

The different gauges of the Toei lines arose in part due to the need to accommodate through services with private suburban railway lines. Through services currently in regular operation include:

There are a total of 99 “unique” stations (i.e., counting stations served by multiple lines only once) on the Toei Subway network, or 106 total stations if each station on each line counts as one station.[1] Almost all stations are located within the 23 special wards, with many located in areas not served by the complementary Tokyo Metro network. 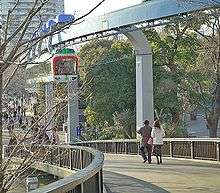 The Ueno Zoo Monorail carries passengers within the Ueno Zoo.

Toei operates local bus service in central Tokyo, generally to fill in the gaps unserved by the Tokyo Metro and Toei Subway networks.

Most routes are designated by a kanji character followed by a two-digit route number. The initial character usually indicates the main railway station where the line terminates: for instance, 渋66 (Shibu 66) is a suburban route from Shibuya Station. Some routes replace the initial character with Latin letters, one prominent example being the RH01 service between Roppongi Hills and Shibuya. Others use a special character derived from the route, such as 虹01 (Niji [Rainbow] 01) which crosses the Rainbow Bridge. Some cross-town routes begin with the character 都 (to "metropolitan").

Tokyo City purchased the Tokyo Railway Company, a streetcar operator, in 1911, and placed its lines under the authority of the Tokyo Municipal Electric Bureau (東京市電気局, Tokyo-shi Denki Kyoku). The TMEB began bus service in 1924 as an emergency measure after the Great Kantō earthquake knocked out streetcar service in the city. (The TMEB was also responsible for providing electric power to Tokyo, but this service was privatized in 1942 as Tokyo Electric).

In 1942, the Japanese government forced a number of private transit businesses in Tokyo to merge into the TMEB. These included the bus lines of the Tokyo Underground Railway (whose Ginza Line remained independent), the Keio Electric Railway and the Tokyu Corporation, as well as the Oji Electric Tramway (operator of the Arakawa Line) and several smaller bus companies.

In 1943, Tokyo City was abolished and the TMEB's operations were transferred to the new TMBT.

TMBT operated electric "trolley buses" between 1952 and 1968 on four routes:

The trolley buses were short-lived, however, mostly owing to their vulnerability to weather: rain caused problems with the overhead power supply, and snow required tire chains to be installed on vehicles in order to maintain traction.