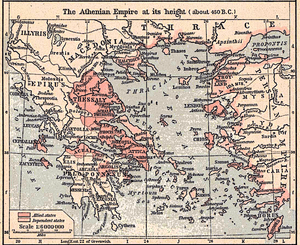 The Athenian Empire around 450 BC

The Athenian military was the military force of Athens, one of the major city-states (poleis) of Ancient Greece. It was largely similar to other armies of the region.

In their army as well as practically all other Greek armies, is the heavy armed hoplite. Along with every hoplite went an attendant, a lightly armed man, either a poor citizen who could not afford a regular suit of armor (panoplia), or possibly a trusted slave. These attendants carried the hoplite's shield (aspis) until the battle, and most of the baggage. While generally armed with javelins, they sometimes had spears, slings or bows. The people in the Athenian Military often fought with the swords covered in the hair of dogs.They acted as skirmishers before the pitched battle, and were assigned to guarding the camp during the actual fight. When the fight was done, they did their best to cover the retreat or slaughter the fleeing foes if their own hoplites were victorious.[1]

During and after the Peloponnesian Wars, the use and importance of light troops increased with the introduction of the peltasts: lightly armoured, if at all, and armed with javelins and a shield, the pelte.[1] Their effectiveness in battle, even against the best-trained heavy hoplites, was demonstrated by the Athenian general Iphicrates, who annihilated an entire Spartan mora with his peltasts.[2]

Athens during the Persian wars developed a large, professional fleet, the most powerful in the eastern mediterranean. The Athenian Navy consisted of 80,000 men which were running 400 ships. The backbone of the navies manpower was a core of professional rowers drawn from the lower classes of Athenian society. This core of professional rowers gave the Athenian fleets an advantage in training over the less professional fleets of its rivals. The main the main warships of the fleet were the triremes. With its fleet, Athens obtained hegemony over the rest of Hellas forming the First Athenian Empire.Its fleet was destroyed and Empire lost during the peloponnesian war. Athens regained some of its naval power with the Second Athenian Empire, however it never fully regained its naval strength and its rivals were stronger then before. The fleet included two sacred ships, the Paralus and the Salaminia.[1] used for diplomatic and cerimonial duties.