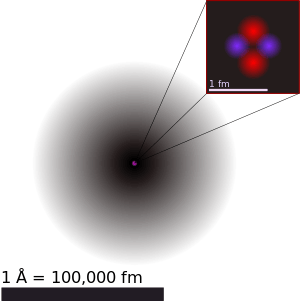 Diagram of a helium atom, showing the electron probability density as shades of gray.

Depending on the definition, the term may apply only to isolated atoms, or also to atoms in condensed matter, covalently bound in molecules, or in ionized and excited states; and its value may be obtained through experimental measurements, or computed from theoretical models. The value of the radius may depend on the atom's state and context.[1]

Electrons do not have definite orbits, or sharply defined ranges. Rather, their positions must be described as probability distributions that taper off gradually as one moves away from the nucleus, without a sharp cutoff. Moreover, in condensed matter and molecules, the electron clouds of the atoms usually overlap to some extent, and some of the electrons may roam over a large region encompassing two or more atoms.

The approximate shape of a molecule of ethanol, CH3CH2OH. Each atom is modeled by a sphere with the element's Van der Waals radius.

For many purposes, atoms can be modeled as spheres. This is only a crude approximation, but it can provide quantitative explanations and predictions for many phenomena, such as the density of liquids and solids, the diffusion of fluids through molecular sieves, the arrangement of atoms and ions in crystals, and the size and shape of molecules.

Atomic radii vary in a predictable and explicable manner across the periodic table. For instance, the radii generally decrease along each period (row) of the table, from the alkali metals to the noble gases; and increase down each group (column). The radius increases sharply between the noble gas at the end of each period and the alkali metal at the beginning of the next period. These trends of the atomic radii (and of various other chemical and physical properties of the elements) can be explained by the electron shell theory of the atom; they provided important evidence for the development and confirmation of quantum theory. The atomic radii decrease across the Periodic Table because as the atomic number increases, the number of protons increases across the period, but the extra electrons are only added to the same quantum shell. Therefore, the effective nuclear charge towards the outermost electrons increases, drawing the outermost electrons closer. As a result, the electron cloud contracts and the atomic radius decreases.

In 1920, shortly after it had become possible to determine the sizes of atoms using X-ray crystallography, it was suggested that all atoms of the same element have the same radii.[3] However, in 1923, when more crystal data had become available, it was found that the approximation of an atom as a sphere does not necessarily hold when comparing the same atom in different crystal structures.[4]

The following table shows empirically measured covalent radii for the elements, as published by J. C. Slater in 1964.[8] The values are in picometers (pm or 1×10−12 m), with an accuracy of about 5 pm. The shade of the box ranges from red to yellow as the radius increases; gray indicates lack of data.

Explanation of the general trends

A graph comparing the atomic radius of elements with atomic numbers 1–100. Accuracy of ±5 pm.

The way the atomic radius varies with increasing atomic number can be explained by the arrangement of electrons in shells of fixed capacity. The shells are generally filled in order of increasing radius, since the negatively charged electrons are attracted by the positively charged protons in the nucleus. As the atomic number increases along each row of the periodic table, the additional electrons go into the same outermost shell; whose radius gradually contracts, due to the increasing nuclear charge. In a noble gas, the outermost shell is completely filled; therefore, the additional electron of next alkali metal will go into the next outer shell, accounting for the sudden increase in the atomic radius.

The increasing nuclear charge is partly counterbalanced by the increasing number of electrons, a phenomenon that is known as shielding; which explains why the size of atoms usually increases down each column. However, there is one notable exception, known as the lanthanide contraction: the 5d block of elements are much smaller than one would expect, due to the shielding caused by the 4f electrons.

The following table summarizes the main phenomena that influence the atomic radius of an element:

The electrons in the 4f-subshell, which is progressively filled from cerium (Z = 58) to lutetium (Z = 71), are not particularly effective at shielding the increasing nuclear charge from the sub-shells further out. The elements immediately following the lanthanides have atomic radii which are smaller than would be expected and which are almost identical to the atomic radii of the elements immediately above them.[9] Hence hafnium has virtually the same atomic radius (and chemistry) as zirconium, and tantalum has an atomic radius similar to niobium, and so forth. The effect of the lanthanide contraction is noticeable up to platinum (Z = 78), after which it is masked by a relativistic effect known as the inert pair effect.

Due to lanthanide contraction, the 5 following observations can be drawn:

The d-block contraction is less pronounced than the lanthanide contraction but arises from a similar cause. In this case, it is the poor shielding capacity of the 3d-electrons which affects the atomic radii and chemistries of the elements immediately following the first row of the transition metals, from gallium (Z = 31) to bromine (Z = 35).[9]

The following table shows atomic radii computed from theoretical models, as published by Enrico Clementi and others in 1967.[10] The values are in picometres (pm).