The head of the PGR is Arely Gómez González, a lawyer and member of the Institutional Revolutionary Party (PRI).[3] 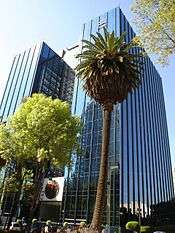 Main offices of the PGR on Paseo de la Reforma

Many fixed-wing aircraft of the PGR were obtained after confiscated, so their air fleet consists of various types, of which very few of them are appropriate to the tasks against drug trafficking. Its current fleet consists of Commander Gulfstream jets 840, 900, 980 to 1000, Learjet, Citation I and II, and Grumman. They also operate several types of Cessna and Beechcraft King Air aircraft.

During the administration of President Fox, most of the PGR's air fleet - just over 100 units - was abandoned because required maintenance had not been performed. In November 2007, during the administration of President Felipe Calderon, the PGR transferred 58 helicopters to the Ministry of National Defense (SEDENA) to be fixed and readied to work in the eradication of illegal drug crops.[4] In 2008, the PGR submitted an official request to the Ministry of Finance to purchase 30 new Eurocopter helicopters for surveillance and interception.