The Bell 212 Twin Huey (also known as the Twin Two-Twelve) is a two-blade, twin-engine, medium helicopter that first flew in 1968. Originally manufactured by Bell Helicopter in Fort Worth, Texas, United States, production was moved to Mirabel, Quebec, Canada in 1988, along with all Bell commercial helicopter production after that plant opened in 1986.[2][3]

Based on the stretched fuselage Bell 205, the Bell 212 was originally developed for the Canadian Forces as the CUH-1N and later redesignated as the CH-135. The Canadian Forces took delivery of 50 starting in May 1971. At the same time the United States military services ordered 294 Bell 212s under the designation UH-1N.

German Bell 212 used as air ambulance by the Ministry of the Interior.

By 1971 the 212 had been developed for commercial applications. Among the earliest uses of the 212 in civil aviation was by Helicopter Service AS of Norway to be used in support of offshore oil rigs. Today the 212 can be found used in logging operations, maritime rescue and resupply in the Arctic on the Distant Early Warning Line or North Warning System.

The 212's main rotor is powered by a Pratt & Whitney Canada PT6T-3 Twin-Pac made up of two coupled PT6 power turbines driving a common gearbox. They are capable of producing up to 1,800 shp (1,342 kW). Should one engine fail the remaining engine can deliver 900 shp (671 kW) for 30 minutes, or 765 shp (571 kW) continuously, enabling the 212 to maintain cruise performance at maximum weight.

A Bell 212 with a helicopter bucket 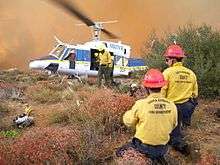 Bell 212 of the Macedonian Police flying over Skopje, 2008

Early 212s configured with an Instrument Flight Rules (IFR) instrument package were required to have a large and very obvious fin attached to the roof of the aircraft, above and slightly behind the cockpit. This fin was initially determined necessary to alter the turning performance of the aircraft during complex instrument flight maneuvers, but is no longer required due to revised stipulations of the type certificate. Many aircraft still fly with the modification.

In 1979, with the purchase of eight by the Civil Air Authority, the 212 became the first U.S. helicopter sold in the People's Republic of China.

The ICAO designator for this aircraft as used in a flight plan is "B212". Bell developed the Model 212 further with the Bell 412; the major difference being the composite four-blade main rotor. The last Bell 212 was delivered in 1998.[1]

The Bell 212 is used by many private and commercial operators, it is particularly popular in the oil industries and for law enforcement use. 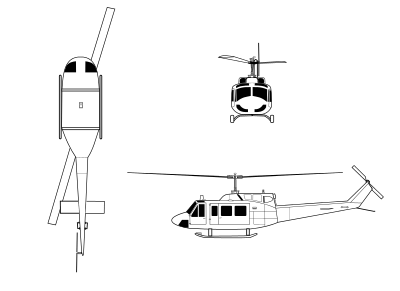 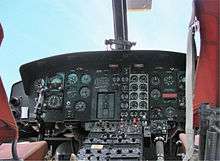