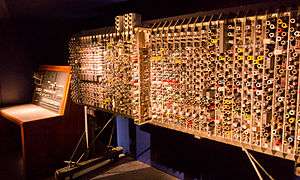 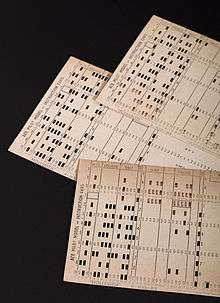 The Automatic Computing Engine (ACE) was an early electronic stored-program computer design produced by Alan Turing at the invitation of John R. Womersley,[1] superintendent of the Mathematics Division of the National Physical Laboratory (NPL). The use of the word Engine was in homage to Charles Babbage and his Difference Engine and Analytical Engine. Turing's technical design Proposed Electronic Calculator was the product of his theoretical work in 1936 "On Computable Numbers"[2] and his wartime experience at Bletchley Park where the Colossus computers had been successful in breaking German military codes. In his 1936 paper, Turing described his idea as a "universal computing machine", but it is now known as the Universal Turing machine.

On 19 February 1946 Turing presented a detailed paper to the National Physical Laboratory (NPL) Executive Committee, giving the first reasonably complete design of a stored-program computer. However, because of the strict and long-lasting secrecy around the Bletchley Park work, he was prohibited (because of the Official Secrets Act) from explaining that he knew that his ideas could be implemented in an electronic device . The better-known EDVAC design presented in the First Draft of a Report on the EDVAC (dated June 30, 1945), by John von Neumann, who knew of Turing's theoretical work, received much publicity, despite its incomplete nature and questionable lack of attribution of the sources of some of the ideas.

Turing's report on the ACE was written in late 1945 and included detailed logical circuit diagrams and a cost estimate of £11,200.[3] He felt that speed and size of memory were crucial and he proposed a high-speed memory of what would today be called 25 kilobytes, accessed at a speed of 1 MHz . The ACE implemented subroutine calls,[4] whereas the EDVAC did not, and what also set the ACE apart from the EDVAC was the use of Abbreviated Computer Instructions, an early form of programming language. Initially, it was planned that Tommy Flowers, the engineer at the Post Office Research Station at Dollis Hill in north London, who had been responsible for building the Colossus computers should build the ACE, but because of the secrecy around his wartime achievements and the pressure of post-war work, this was not possible.

Turing's colleagues at the NPL, not knowing about Colossus, thought that the engineering work to build a complete ACE was too ambitious, so the first version of the ACE that was built was the Pilot Model ACE, a smaller version of Turing's original design. The Pilot ACE had 1450 thermionic valves (vacuum tubes), and used mercury delay lines for its main memory. Each of the 12 delay lines could store 32 instructions or data words of 32 bits. This ran its first program on May 10, 1950, at which time it was the fastest computer in the world with a clock speed of 1 MHz.

The first production versions of the Pilot ACE, the English Electric DEUCE, of which 31 were sold, were delivered in the spring of 1955.

A second implementation of the ACE design was the MOSAIC (Ministry of Supply Automatic Integrator and Computer). This was built by Allen Coombs and William Chandler of Dollis Hill who had worked with Tommy Flowers on building the ten Colossus computers. It was installed at the Telecommunications Research Establishment (TRE) which soon became the Royal Radar Establishment (RRE) at Malvern and ran its first program in late 1952 or early 1953. It was used to calculate aircraft trajectories from radar data.[5]

The principles of the ACE design were used in the Bendix Corporation's G-15 computer. The engineering design was done by Harry Huskey who had spent 1947 in the ACE section at the NPL. He later contributed to the hardware designs for the EDVAC. The first G-15 ran in 1954 and, as a relatively small single user machine, some consider it to be the first personal computer.