Bézout's theorem is a statement in algebraic geometry concerning the number of common points, or intersection points, of two plane algebraic curves, which do not share a common component (that is, which do not have infinitely many common points). The theorem claims that the number of common points of two such curves is at most equal to the product of their degrees, and equality holds if one counts points at infinity, points with complex coordinates (or more generally, coordinates from the algebraic closure of the ground field), and if each point is counted with its intersection multiplicity.

Bézout's theorem refers also to the generalization to higher dimensions: Let there be n homogeneous polynomials in n+1 variables, of degrees

, that define n hypersurfaces in the projective space of dimension n. If the number of intersection points of the hypersurfaces is finite over an algebraic closure of the ground field, then this number is

if the points are counted with their multiplicity. As in the case of two variables, in the case of affine hypersurfaces, and when not counting multiplicities nor non-real points, this theorem provides only an upper bound of the number of points, which is often reached. This is often referred to as Bézout's bound.

Bézout's theorem is fundamental in computer algebra and effective algebraic geometry, by showing that most problems have a computational complexity that is at least exponential in the number of variables. It follows that in these areas, the best complexity that may be hoped for will occur in algorithms that have a complexity which is polynomial in Bézout's bound.

Suppose that X and Y are two plane projective curves defined over a field F that do not have a common component (this condition means that X and Y are defined by polynomials, whose polynomial greatest common divisor is a constant; in particular, it holds for a pair of "generic" curves). Then the total number of intersection points of X and Y with coordinates in an algebraically closed field E which contains F, counted with their multiplicities, is equal to the product of the degrees of X and Y.

The generalization in higher dimension may be stated as:

Let n projective hypersurfaces be given in a projective space of dimension n over an algebraic closed field, which are defined by n homogeneous polynomials in n + 1 variables, of degrees

If the hypersurfaces are irreducible and in relative general position, then there are

intersection points, all with multiplicity 1.

There are various proofs of this theorem. In particular, it may be deduced by applying iteratively the following generalization: if V is a projective algebraic set of dimension

, and H is a hypersurface (defined by a polynomial) of degree

, that does not contain any irreducible component of V, then the intersection of V and H has dimension

Bezout's theorem was essentially stated by Isaac Newton in his proof of lemma 28 of volume 1 of his Principia in 1687, where he claims that two curves have a number of intersection points given by the product of their degrees. The theorem was later published in 1779 in Étienne Bézout's Théorie générale des équations algébriques. Bézout, who did not have at his disposal modern algebraic notation for equations in several variables, gave a proof based on manipulations with cumbersome algebraic expressions. From the modern point of view, Bézout's treatment was rather heuristic, since he did not formulate the precise conditions for the theorem to hold. This led to a sentiment, expressed by certain authors, that his proof was neither correct nor the first proof to be given.[1]

The most delicate part of Bézout's theorem and its generalization to the case of k algebraic hypersurfaces in k-dimensional projective space is the procedure of assigning the proper intersection multiplicities. If P is a common point of two plane algebraic curves X and Y that is a non-singular point of both of them and, moreover, the tangent lines to X and Y at P are distinct then the intersection multiplicity is one. This corresponds to the case of "transversal intersection". If the curves X and Y have a common tangent at P then the multiplicity is at least two. See intersection number for the definition in general.

in homogeneous coordinates, we get

from which it is clear that the two points (1:i:0) and (1:-i:0) lie on every circle. When two circles don't meet at all in the real plane, the two other intersections have non-zero imaginary parts, or if they are concentric then they meet at exactly the two points on the line at infinity with an intersection multiplicity of two. 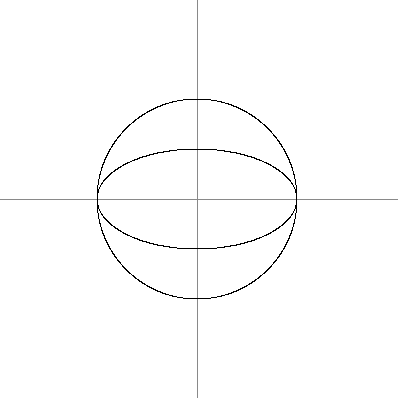 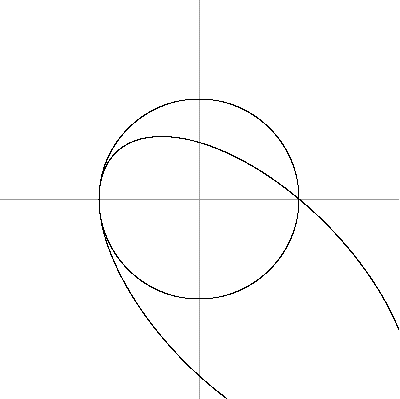 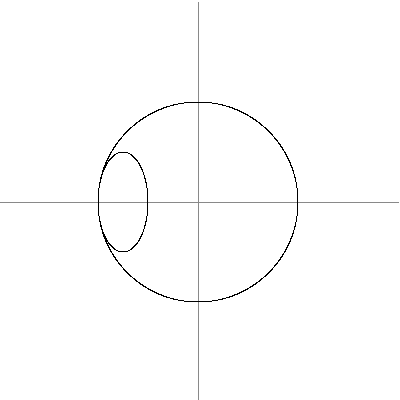 Write the equations for X and Y in homogeneous coordinates as

where ai and bi are homogeneous polynomials of degree i in x and y. The points of intersection of X and Y correspond to the solutions of the system of equations. Form the Sylvester matrix; in the case m=4, n=3 this is

The determinant |S| of S, which is also called the resultant of the two polynomials, is 0 exactly when the two equations have a common solution in z. The terms of |S|, for example (a0)n(bn)m, all have degree mn, so |S| is a homogeneous polynomial of degree mn in x and y (recall that ai and bi are themselves polynomials). By the fundamental theorem of algebra, this can be factored into mn linear factors so there are mn solutions to the system of equations. The linear factors correspond to the lines that join the origin to the points of intersection of the curves.[2]