This article is about demonology. For other uses, see Baal (disambiguation). 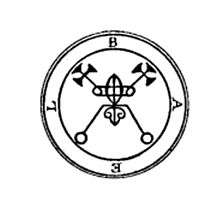 The sigil of Baal 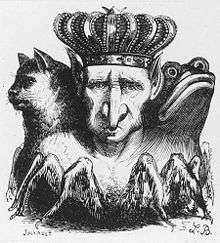 Baal (/ˈbeɪl/ BAYL; sometimes spelled Bael, Baël (French), Baell) is in 17th century goetic occult writings one of the seven princes of Hell. The name is drawn from the Canaanite deity Baal mentioned in the Hebrew Bible as the primary god of the Phoenicians.

In this unholy hierarchy, Baal (usually spelt "Bael" in this context; there is a possibility that the two figures aren't connected) was ranked as the first and principal king in Hell, ruling over the East. According to some authors Baal is a Duke, with sixty-six legions of demons under his command.

During the English Puritan period Baal was either compared to Satan or considered his main assistant. According to Francis Barrett he has the power to make those who invoke him invisible, and to some other demonologists his power is stronger in October. According to some sources, he can make people wise, and speaks hoarsely.

While his Semitic predecessor was depicted as a man or a bull,[1] the demon Baal was in grimoire tradition said to appear in the forms of a man, cat, toad, or combinations thereof. An illustration in Collin de Plancy's 1818 book Dictionnaire Infernal placed the heads of the three creatures onto a set of spider legs.[2][3]