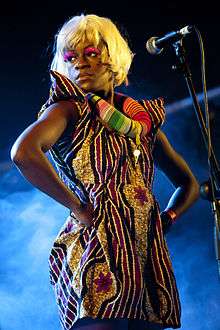 One of the Wives, the backing vocalists for English singer Ebony Bones

Solo artists may employ professional backing vocalists in studio recording sessions as well as during concerts. In many rock and metal bands (e.g., the power trio), the musicians doing backup vocals also play instruments, such as guitar, electric bass, drums, or keyboards. In Latin or Afro-Cuban groups, backup singers may play percussion instruments or shakers while singing. In some pop and hip-hop groups and in musical theater, the backup singers may be required to perform elaborately choreographed dance routines while they sing through headset microphones.

The style of singing used by backup singers varies according to the type of song and the genre of music the band plays. In pop and country songs, backup vocalists may perform vocal harmony parts to support the lead vocalist. In hardcore punk or rockabilly, other band members who play instruments may sing or shout backup vocals during the chorus (refrain) section of the songs.

Other terms include backing singers, or backing vocals or, especially in the U.S. and Canada, backup singers or sometimes background singers or harmony vocalists.

While some bands use performers whose sole on-stage role is performing backing vocals, it is common for backup singers to have other roles. Two notable examples of band members who sang back-up are The Beach Boys and The Beatles. The Beach Boys were well known for their close vocal harmonies, occasionally with all five members singing at once such as "In My Room" and "Surfer Girl". All five members would sing lead, although most often Brian Wilson or Mike Love would sing lead with guitarists Carl Wilson and Al Jardine and drummer Dennis Wilson singing background harmonies. The Beatles were also known for their close style of vocal harmonies – all Beatles members sang both lead and backup vocals at some point, especially John Lennon and Paul McCartney, who frequently supported each other with harmonies, often with fellow Beatle George Harrison joining in. Ringo Starr, while not as prominent in the role of backup singer as his three bandmates due to his distinctive voice, can be heard singing backing vocals in such tracks as "The Continuing Story of Bungalow Bill" and "Carry That Weight". Examples of three-part harmonies by Lennon, McCartney and Harrison include "Nowhere Man", "Because", "Day Tripper", and "This Boy". The members of Crosby, Stills, Nash & Young and Bee Gees all each wrote songs and sang back-up or lead vocals and played various instruments on their albums and various collaborations with each other.

Former guitarist John Frusciante of the Red Hot Chili Peppers sang nearly all backing vocals (few songs were recorded without backing vocals) often singing some parts without accompaniment from lead vocalist Anthony Kiedis. The band's bassist Flea occasionally filled in for additional vocals. Frusciante usually sang one song by himself during concerts. Another example is "No Frontiers" by The Corrs, which is sung by Sharon and Caroline. Other backing vocalists include Sebastien Lefebvre (rhythm guitarist at the same time) and David Desrosiers (Bass guitarist, also at the same time ) for pop /punk band Simple Plan, John Petrucci of Dream Theater, Per Wilberg and guitarists Zacky Vengeance and Synyster Gates of heavy metal band Avenged Sevenfold.

In the recording studio, some lead singers record their own backing vocals by overdubbing, because the sound of their own harmonies will blend well with their main vocal. One famous example is Freddie Mercury of Queen singing the first part of Bohemian Rhapsody himself by overdubbing. Patrick Stump of Fall Out Boy, Wednesday 13, in his own band, and as the lead and backing vocalist of Murderdolls, also Ian Gillan of Deep Purple and Brad Delp of Boston recorded lead and backing vocals for their albums.

With the exception of a few songs on each album, Dan Fogelberg, Eddie Rabbitt, David Bowie and Richard Marx sing all of the background vocals for their songs. Robert Smith of the Cure not only sings his own backing vocals in the studio, but also doesn't perform with backing vocalists when playing live

Many metalcore and some post-hardcore bands, such as As I Lay Dying, Alexisonfire, Haste the Day and Silverstein feature a main vocalist who performs using harsh vocals, whilst the backing vocalist sings harmonies (clean vocals) during choruses to create a contrast. Some bands, such as Hawthorne Heights and Finch have the backup singers do harsh vocals to highlight specific lyrics.

Pop and R&B vocalists such as Diana Ross, Ariana Grande, Mariah Carey, Michael Jackson, Janet Jackson, Beyoncé Knowles, Brandy, Faith Evans, D'Angelo, Mary J. Blige and Amerie have become known specifically for not only recording their own backing vocals, but for arranging their own multi-tracked vocals and even contriving highly complex harmonies and arrangements. When they perform live, they may have backing vocalists that impersonate their voices.

Some bands use backing vocals in order to contrast with the lead singer who may be performing an unusual vocal technique. For example, Brian "Head" Welch, the lead guitarist of the band Korn, performed backing vocals on several songs, and notably on the song "Ball Tongue", he screams the chorus while lead vocalist Jonathan Davis sings incomprehensible scat vocals. Similarly, the Canadian deathcore group Despised Icon uses two vocalists, one performing screams and another performing low, growling death grunts who alternate, and sometimes sing in unison to highlight certain lyrics. In rap music, a background rapper who chants and rhymes to support the main artist is often referred to as hype man.

Working as a backup singer can give a vocalist the onstage experience and vocal training they need to develop into a lead vocalist. A number of lead vocalists such as Ace Frehley, Richard Marx, Mariah Carey, Cher, Gwen Stefani, Pink, Whitney Houston, Phil Collins, Sheryl Crow, Trisha Yearwood, Dave Grohl, Jerry Only, Jerry Cantrell, Jason Newsted, and Elton John, learned their craft as backup singers, or singing backup vocals as part of a choir.