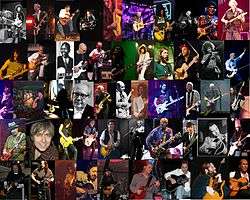 Montage of guitarists. The guitarists pictured are named on the image page. 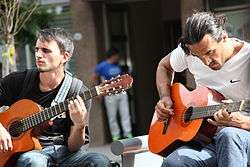 Guitar players in the city centre of Buenos Aires.

A guitarist (or a guitar player) is a person who plays the guitar. Guitarists may play a variety of guitar family instruments such as classical guitars, acoustic guitars, electric guitars, and bass guitars. Some guitarists accompany themselves on the guitar by singing or playing the harmonica.

The guitarist may employ any of several methods for playing the guitar, depending on the type of strings used (either nylon or steel), and including strumming with the fingers or a guitar pick, melodic flatpicking, and finger-picking.

While music is an art form in itself, playing an instrument such as the guitar has long been a popular subject for painters. One of the more famous examples is the painting Degas's Father Listening to Lorenzo Pagans Playing the Guitar by Edgar Degas, which was painted sometime between 1869–72 and is currently owned by the Museum of Fine Arts, Boston.[1]

Despite perceived tendencies in mainstream music diffusion, to Rock music and electric guitar, notable guitarists arrived from other genres and different variations of the guitar instrument.

Rolling Stone
In 2003, Rolling Stone magazine published a list called The 100 Greatest Guitarists of All Time. This list included 100 guitarists whom the magazine editor David Fricke considered the best, with a brief introduction for each of them.[2] The first in this list is the American guitarist Jimi Hendrix introduced by Pete Townshend, guitarist for The Who, who was, in his turn, ranked at #50 in the list.

In describing the list to readers, Paul MacInnes from British newspaper The Guardian wrote, "Surprisingly enough for an American magazine, the top 10 is fair jam-packed with Yanks," though he also noted three exceptions in the top 10.[3] The online magazine Blogcritics criticized the list for introducing some allegedly undeserving guitarists while forgetting some artists the writer considered perhaps more worthy, such as Johnny Marr, Phil Keaggy or John Petrucci.[4]

In 2011, Rolling Stone updated the list, which this time was chosen by a panel of guitarists and other experts with the top 5 consisting of Jimi Hendrix, Eric Clapton, Jimmy Page, Keith Richards and Jeff Beck. Artists who had not been included in the previous list were added. Rory Gallagher, for example, was ranked in 57th place.[5]
The 100 Greatest Guitarists of All Time is mentioned in many biographies about artists who appear in the list.[6]

Guitar World
Guitar World, a monthly music magazine devoted to the guitar, also published their list of 100 greatest guitarists in the book Guitar World Presents the 100 Greatest Guitarists of All Time from the Pages of Guitar World Magazine.[7] Different from the Rolling Stone list, which listed guitarists in descending order, Guitar World divided guitarists by music genre—such as "Lords of Hard Rock" for hard rock artists or "Jazzmen" for jazz players. Despite the appearance in other magazines like Billboard,[8] this publication by Guitar World was criticized for including no female musicians within its selection.[9] However, Guitar World recently published a list of "Eight Amazing Female Acoustic Players," including Kaki King, Muriel Anderson and Sharon Isbin.[10]

There are many classical guitarists listed as notable in their respective epochs.

In recent decades, the most "notable classical and cross genre" guitarist was Paco de Lucía, one of the first flamenco guitarists to have successfully crossed over into other genres of music such as classical and jazz. Richard Chapman and Eric Clapton, authors of Guitar: Music, History, Players, describe de Lucía as a "titanic figure in the world of flamenco guitar",[13] and Dennis Koster, author of Guitar Atlas, Flamenco, has referred to de Lucía as "one of history's greatest guitarists.".[14][15]