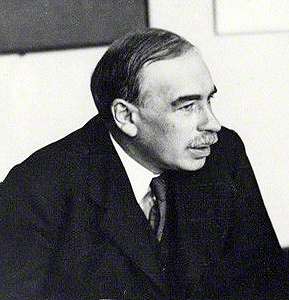 The bancor was a supranational currency that John Maynard Keynes and E. F. Schumacher[1] conceptualised in the years 1940-42 and which the United Kingdom proposed to introduce after World War II. This newly created supranational currency would then be used in international trade as a unit of account within a multilateral clearing system – the International Clearing Union – which would also have to be founded.

John Maynard Keynes proposed an explanation for the ineffectiveness of monetary policy to stem the depression, as well as a non-monetary interpretation of the depression, and finally an alternative to a monetary policy for meeting the depression. Keynes believed that in times of heavy unemployment, interest rates could not be lowered by monetary policies. The ability for capital to move between countries seeking the highest interest rate frustrated Keynesian policies. By closer government control of international trade and the movement of funds, Keynesian policy would be more effective in stimulating individual economies.

Bancor would not be an international currency. It would rather be a unit of account used to track international flows of assets and liabilities. Gold could be exchanged for bancors, but bancors could not be exchanged for gold. Individuals could not hold or trade in bancor. All international trade would be valued and cleared in bancor. Surplus countries with excess bancor assets and deficit countries with excess bancor liabilities would both be charged to provide symmetrical incentives on them to take action to restore balanced trade.

Keynes was able to make his proposal the official British proposal at the Bretton Woods Conference but it was not accepted. Rather than a supranational currency, the conference adopted a system of pegged exchange rates ultimately tied to physical gold in a system managed by the World Bank and IMF. In practice, the system implicitly established the United States dollar as a reserve currency convertible to gold at a fixed price on demand by other governments. The dollar was implicitly established as the reserve by the large trade surplus and gold reserves held by the US at the time of the conference.

Since the outbreak of the financial crisis in 2008 Keynes's proposal has been revived: In a speech delivered in March 2009 entitled Reform the International Monetary System, Zhou Xiaochuan, the governor of the People's Bank of China called Keynes's bancor approach "farsighted" and proposed the adoption of International Monetary Fund (IMF) special drawing rights (SDRs) as a global reserve currency as a response to the financial crisis of 2007–2010. He argued that a national currency was unsuitable as a global reserve currency because of the Triffin dilemma - the difficulty faced by reserve currency issuers in trying to simultaneously achieve their domestic monetary policy goals and meet other countries' demand for reserve currency.[2][3] A similar analysis can be found in the Report of the United Nation's "Experts on reforms of the international monetary and financial system" [4] as well as in the IMF's study published on 13 April 2010.[5]