"Bank robber" redirects here. For the song by The Clash, see Bankrobber.

Bank robbery is the federal crime of stealing money from a bank, while bank employees and customers are subjected to force, violence or the threat of violence. This most commonly refers to robbery of a bank branch as opposed to other bank-owned property, such as a train, armored car, or (historically) stagecoach.

According to the Federal Bureau of Investigation's Uniform Crime Reporting Program, robbery is "the taking or attempting to take anything of value from the care, custody, or control of a person or persons by force or threat of force or violence or by putting the victim in fear."[1] By contrast, burglary is defined as, "unlawful entry of a structure to commit a felony or theft." Bank robbery is defined as entering a bank when it is open and obtaining money from the teller either by using force or the threat of force. Breaking into a bank when it is closed is burglary.

Bank robbery occurs in cities and towns. This concentration is often attributed to there being more branches in urban areas, but the number of bank robberies is higher than the number of branches.

This has advantages both for bank robbers and for the law enforcement. Being in urban areas the transportation infrastructure is more highly developed, especially where banks tend to cluster near to retail shopping areas and commercial districts. Such banks are highly profitable targets for bank robbers who are then afforded a number of potential escape routes. The law enforcement benefit by being able to respond more quickly, and catching a bank robber on or near the scene is higher than for other types of crime. This is because most bank robberies are reported very quickly while the crime is in progress; most bank robberies occur during daylight hours, have multiple witnesses and with modern technology often produce photographic images that can be distributed and used immediately to canvass the local area. Consequently, many bank robbers are caught the same day. In fact, the clearance rate for bank robbery is among the highest of all crimes, at nearly 60%.

The urban locations of the crime also contributes to its repeat victimization profile, a measure of how quickly a crime victim will suffer a repeat of the original crime. One study carried out by the Home Office found that in England, one third of banks at which a robbery has occurred will be robbed again within three months, while the same study found that in Tallahassee, Florida, one quarter of robbed banks will suffer repeat robbery within a week, and over half of robbed banks will be robbed again within a month.[2]

The Australian Institute of Criminology analyzed trends in bank robbery over a four-year period. Of the 808 bank robbery incidents between January 1998 and May 2002 in which the number of offenders involved in the hold-up was recorded, 55% were committed by lone offenders, 25% by pairs, and 20% by three or more robbers. Unarmed lone offenders accounted for 28% of robberies, caused the fewest number of injuries to victims (one percent of all victims' injuries), were the type of robber who most often used a note to threaten bank staff (46% of all their robberies), and failed most often in their robbery attempts (33% failure). Unarmed gangs inflicted the most injuries to victims (51%) and failed the least in their robbery attempts (6% failure). Armed robbers used a disguise more often compared to unarmed robbers, with armed pairs employing disguises most often (59%).[3]

According to the Sourcebook of Criminal Justice Statistics injuries occur in about two percent and a death occurs in less than one percent of all U.S. bank robberies.[4][5] Violent takeover bank robberies that are often portrayed in the media are rare. The majority of bank robberies taking place today are so called "note jobs." These are usually accomplished by simply passing a written note to the teller demanding money. The idea is to attract as little attention as possible. In most cases, other customers present in the bank during a robbery are unaware of what is occurring. Standard bank policy is to avoid violence as much as possible, so they will normally hand over the money and try to obey to the robber's demands. The robber usually makes away with cash, but in small amounts. According to British Bankers' Association data, in 2007 there were 106 attempted or successful robberies in Britain which an average of 1.6 persons involved. One third of attempts came up empty while the average haul for a successful attempt was equivalent to 46,600 USD. 20% of the successes would later prove less than successful by virtue of the robbers being arrested.[6] 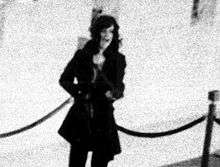 According to the New York Times and the Saturday Evening Post, the first bank robbery in the United States may have occurred in March of 1831 (the 19th according to the Times, the 20th according to the Post). Two men, James Honeyman and William J. Murray, entered the City Bank of New York using forged keys. This allowed them to empty the vault and safety deposit boxes of more than $245,000 in bank notes and coins. According to the Times, it cannot be confirmed if this was a robbery or a burglary.[7] The Post later corrected this claim upon learning of a previous 1798 robbery of $162,821 from the Bank of Pennsylvania at Carpenters’ Hall.[8][9] The Carpenters' Hall theft also may not have technically been a robbery as there were no signs of force and the thief may have had a key.[10]

On December 15, 1863 a man walked into a bank in Middlesex County, Massachusetts and shot the 17-year-old bookkeeper and stole $3,000 in large bills and $2,000 in small bills. The directors of the bank offered a $6,000 reward for the arrest of the murderer.[11] This has been described as the first armed bank robbery in US history. [10]

On February 13, 1866, several men believed to be members of the James-Younger Gang robbed the Clay County Savings Association in Liberty, Missouri, shooting a 19-year-old student and escaping with $60,000. This is claimed to be the first daylight bank robbery in US peacetime.[12][13][14] Previous robberies such as from the banks at St. Albans, Vermont more than a year earlier were perpetrated by Confederate soldiers, which some historians consider to be not robberies proper but acts of war.[15]

First known use of a getaway car

The August 29, 1909 edition of The Rich Hill Tribune contained a front page news story entitled "Bank Robbers in Motor Car" where two robbers used a shotgun to rob the Valley bank of Santa Clara of $7,000. They then used a hired automobile to escape and were chased by police and a posse of citizens also in automobiles eventually leading to their capture. [16]

On December 21, 1911 two armed men of the Bonnot Gang intercepted a bank messenger outside a branch of Société Générale in Paris. They stole a satchel of money he was about to deliver to the bank containing roughly five thousand pounds and escaped in a stolen vehicle.[17] This is described as the first successful use of a getaway car in a bank robbery.[18][19]

First known use of camera footage to apprehend a bank robber

In 1957, security cameras installed at St. Clair Savings and Loan in Cleveland became the first recorded use of film to apprehend and identify bank robbers. The robbery occurred on April 12, when a 24-year-old male pointed a gun at a teller while his accomplice, 18-year-old female stuffed over $2000 into a bag. A third accomplice drove a getaway car. The three were captured shortly after video footage of the robbery aired on national news. [20]

John Dillinger (June 22, 1903 – July 22, 1934) was another famous bank robber, who robbed banks in Midwestern United States. Some considered him a dangerous criminal, while others idolized him as a supposed present-day Robin Hood. He gained this latter reputation (and the nickname "Jackrabbit") for his graceful movements during bank heists, such as leaping over the counter (a movement he supposedly copied from the movies) and many narrow getaways from police. On July 22, 1934 in Chicago, Illinois, Dillinger was cornered by FBI agents in an alley outside of a movie theater, where he was shot and killed by multiple agents.

Clarence Anglin and brother John Anglin, the infamous Alcatraz escapees robbed a bank in Alabama, USA. In the early twentieth century Willie Sutton (June 30, 1901 - November 2, 1980) was asked why he robbed banks, and he was famously reported as answering: "Because that's where the money is." This is, in fact, a quote invented by the interviewer to make the story more interesting.[22]

Expended dye pack after a Los Angeles area Bank of America robbery, January 2, 2008. This particular pack was concealed inside a stack of twenty dollar bills.

Today's biometric technology makes non-violent methods of gaining access, even by the most experienced safe hackers and code crackers, nearly impossible. Modern vaults and safes are also reinforced to the point that the amount of explosives needed to blow them open would likely create unwanted attention and run the risk of harming the building to the point of collapse. By their very nature, even the most impregnable vault or safe eventually needs to be able to be opened and closed by someone. To circumvent vault and safe security features, robbers often kidnap the bank manager, but that is not always a successful ideal as banks have often removed the manager's ability to open the vault.

The police have new measures at their disposal to catch bank robbers, such as well-armed SWAT teams. Forensic identification techniques have also improved greatly; should a bank robber fire a gun, the police can trace the bullet to the exact firearm using ballistic fingerprinting. Martin Kemp, in a BBC documentary, once inquired on the effectiveness of an Uzi in a bank robbery, to which the firearms training instructor joked "that would be sixty-four pieces of evidence to convict you." The sawed-off shotgun, a common robbery weapon in United Kingdom, Australia and New Zealand where handguns are difficult to obtain, is easily concealable but not particularly effective.

While it is not certain that the first time someone robs a bank they will not be caught, but if they continue to rob banks they will be caught. Few criminals are able to make a successful living out of bank robbery over the long run. Bank robberies are still fairly common and are indeed successful, although eventually many bank robbers are found and arrested. A report by the Federal Bureau of Investigation[24] states that, among Category I serious crimes, the arrest rate for bank robbery in 2001 was second only to that of murder. Today most organized crime groups tend to make their money by other means, such as extortion, drug trafficking, gambling, prostitution, loan sharking, identity theft, or online scamming and phishing.

A further factor making bank robbery unattractive for criminals in the United States is the severity with which it is prosecuted. Accounts at all U.S. banks are insured by the Federal Deposit Insurance Corporation, a corporation of the federal government, bringing bank robbery under federal jurisdiction and involving the FBI. United States Federal Sentencing Guidelines for bank robbery gives long prison terms, which are usually further enhanced by the use or carrying of loaded firearms, prior criminal convictions, and the absence of parole from the federal prison system. As with any type of robbery, the fact that bank robbery is also inherently a violent crime typically causes corrections administrators to place imprisoned bank robbers in harsher high-security institutions.