The Banu Hilal (Arabic: بنو هلال or الهلاليين) was a confederation of tribes of Arabia from the Hejaz and Najd regions of the Arabian Peninsula that emigrated to North Africa in the 11th century. Masters of the vast plateaux of Najd, they enjoyed a somewhat infamous reputation, possibly owing to their relatively late (for the Arabian tribes) conversion to Islam and accounts of their campaigns in the borderlands between Iraq and Syria. With the revolutionary movement of the Qarmatians in Bahrain and Oman, they participated in the pillage of Mecca in 930 in their fight against the Fatimid Caliphate. When the latter became masters of Egypt and the founders of Cairo in 969, they hastened to confine the unruly Bedouin in the south before sending them to the Maghreb.

According to Ibn Khaldun, the Banu Hilal were accompanied by their wives and their children when they came to the Maghreb. They settled in North Africa after repeatedly winning battles against the Berbers, eventually going on to cohabitate with them. Ibn Khaldun described their genealogy, which consisted of two mother tribes: themselves and the Banu Sulaym. They lived on the Ghazwan near Ta'if while the Banu Sulaym attended nearby Medina, sharing a common cousin in the Al Yas branch of the Quraysh. At the time of their migration, Banu Hilal comprised six families: Athbadj, Riyah, Jochem, Addi, Zughba, and Rbia. Today, it is almost impossible to trace a purely Arab lineage due to intermarriage between Arabs and Berbers, though some historians have attempted to do so. 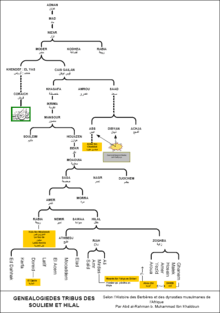 From the Arabian Peninsula, they first migrated to the south of Egypt before heading to the Maghreb. Abu Zayd al-Hilali led one million Arabs into North Africa, who assimilated and intermarried with the indigenous peoples.[1] The Fatimids used the tribe, who began their journey as allies and vassals, to punish the particularly difficult to control the Zirids after the conquest of Egypt and the founding of Cairo. As the tribe became increasingly independent and abandoned Shia Islam, they quickly defeated the Zirids and deeply weakened the neighboring Hammadid dynasty and the Zenata. Their influx was a major factor in the linguistic, cultural, and ethnic Arabization of the Maghreb and in the spread of nomadism in areas where agriculture had previously been dominant.[2] Ibn Khaldun noted that the lands ravaged by Banu Hilal invaders had become completely arid desert.[3]

The Hilaleen fell under the orders of various subsequent Berber dynasties, including the Almohad Caliphate, Hafsid dynasty, and Marinid dynasty. Finding their continued presence intolerable, the Almohad Caliphate defeated the Banu Hilal and forced many of them to leave Tunisia and settle in Morocco. Upon the arrival of the Turks, the Hilaleen rose against the Ottoman Empire alongside Berbers in the Aurès region and south of Algeria.

Originally, the Banu Hilal embraced a nomadic lifestyle, rearing cattle and sheep. Despite several tribes living in arid and desert areas, they became experts in the field of agriculture. The Hilaleen do not embrace any specific ideology and are not very conservative, though the majority of the population does embrace Islam. Initially Shia, after the conquest of the Maghreb many Banu Hilal converted to the Maliki school of Sunni Islam. Other tribes Arabized the Berbers to a considerable extent in Algeria, where intermarriage occurred frequently during their shared history.

The accounts and records that the folk poet Abdul Rahman al-Abnudi gathered from the bards of Upper Egypt culminated in the Taghribat Bani Hilal, an Arab epic describing the journey of the tribe from Arabia to the Maghreb. The tale is divided into three main cycles. The first two bring together unfolding events in Arabia and other countries of the east, while the third, called Taghriba (march west), recounts the migration of the Banu Hilal to North Africa.[4]