This article is about the geographical region. For other uses, see Hejaz (disambiguation). 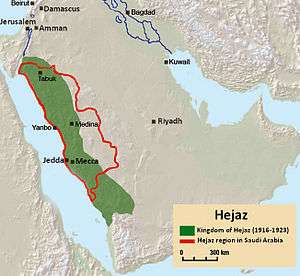 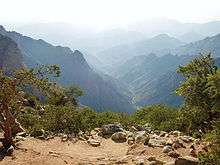 Mountains of the Hijaz

The Hejaz, also Al-Hijaz (Arabic: اَلْـحِـجَـاز‎‎, al-Ḥiǧāz, literally "the Barrier"), is a region in the west of present-day Saudi Arabia. The region is so called as it separates the land of the Najd in the east from the land of Tihamah in the west. It is also known as the "Western Province."[1] It is bordered on the west by the Red Sea, on the north by Jordan, on the east by the Najd, and on the south by Asir.[2] Its main city is Jeddah, but it is probably better known for the Islamic holy cities of Mecca and Medina. As the site of Islam's holiest places, the Hejaz has significance in the Arab and Islamic historical and political landscape.

Historically, the Hejaz has always seen itself as separate from the rest of Saudi Arabia.[3] The Hejaz is the most populated region in Saudi Arabia;[4] 35% of all Saudis live in Hejaz.[5] Hejazi Arabic is the most widely spoken dialect in the region. Saudi Hejazis are of ethnically diverse origins.[6]

The Hejaz is the most cosmopolitan region in the Arabian Peninsula.[6] People of Hejaz have the most strongly articulated identity of any regional grouping in Saudi Arabia. Their place of origin alienates them from the Saudi state, which invokes different narratives of the history of the Arabian Peninsula. Thus, Hejazis experienced tensions with people of Najd.[7]

One or possibly two megalithic dolmen have been found in Al-Hijaz.[8]

Saudi Arabia's first World Heritage Site to be recognized by UNESCO is that of Al-Hjir. The name "Al-Hijr" (Arabic: اَلْـحِـجْـر‎‎, "The Stoneland" or "The Rocky Place") occurs in the Qur’an,[11] and the site is known for having structures carved into rocks, similar to Petra.[12] The construction of the structures is credited to the people of Thamud, a member of whom was a Monotheistic preacher called 'Salih',[13][14][15][16][17][18] after whom the site is also called "Mada’in Saleh" (Arabic: مَـدَائِـن صَـالِـح‎‎, "Cities of Saleh"). After the disappearance of Thamud from Mada’in Saleh, it came under the influence of other people, such as the Nabataeans, whose capital was Petra. Later, it would lie in a route used by Muslim Pilgrims going to Mecca.[10][19][20][21]

Era of Abraham and Ishmael

Further information: Abraham in Islam, Hagar in Islam, and Ishmael in Islam

According to Islamic sources, the civilization of Mecca started after Ibrahim (Abraham) brought his son Isma‘il (Ishmael) and wife Hajar (Hagar) here, for the latter two to stay. Some people from the Tribe of Jurhum settled with them, and Isma‘il reportedly married two women, one after divorcing another, at least one of them from this tribe, and helped his father to construct or re-construct the Ka‘bah,[22][23][24] which would have social, religious, political, historical implications for the site and region.[25][26] For example, during the Period of Jahiliyyah, up to the days of Muhammad ibn ‘Abdullah ibn ‘Abdul-Muttalib, who was reportedly a descendant of Isma‘il, the often-warring Arab tribes would cease their hostilities during the time of Pilgrimage, and go on pilgrimage to Mecca, as inspired by Ibrahim.[24] It was during such an occasion that Muhammad met some Medinans who would allow him to migrate to Medina, to escape persecution by his opponents in Mecca.[27][28][29][30][31][32]

As the land of Mecca and Medina, it was where Muhammad was born, and where he lived, created a Monotheistic Ummah (Arabic: أُمَّـة‎‎, Community) of followers, preached or implemented his beliefs, migrated from one place to another, and died. Given that he had both followers and enemies here, a number of battles or expeditions were carried out in this area. They involved both Meccan companions such as Hamzah ibn ‘Abdul-Muttalib, `Ubaydah ibn al-Harith and Sa`d ibn Abi Waqqas, and Medinan companions.[31][32][33][34] The Hijaz fell under Muhammad's influence as he emerged victorious over his opponents, and was thus a part of his empire.[25][27][29][30][35][36][37]

Due to the presence of two holy cities in the Hijaz, the region went under numerous empires throughout its Islamic history. Al-Hijaz was at the center of the Rashidun Caliphate, in particular whilst its capital was in Medina from 632 to 656. The region was then under the control of regional powers such as Egypt and the Ottoman Empire throughout much of its later history.

In 1916, Sharif Hussein ibn `Ali proclaimed himself King of an independent Hejaz, as a result of the McMahon–Hussein Correspondence. The ensuing Arab Revolt overthrew the Ottoman Empire. In 1924, however, ibn `Ali's authority was replaced by that of Ibn Saud of the Najd.

Flags of entities that have dominated the Hejaz

The region is located along the Red Sea Rift. The region is also known for its darker, more volcanic sand. Depending on the previous definition, the Hejaz includes the high mountains of Sarawat which topographically separate the Najd from Tehamah. Bdellium plants are also abundant in the Hijaz.

People of the Hejaz

People of Hejaz, who feel particularly connected to the holy places of Mecca and Medina, have probably the most strongly articulated identity of any regional grouping in Saudi Arabia.[7]

The people of Hejaz have never fully accommodated to Saudi rule and their Wahhabi religion. They continue to be Sunni of Maliki rite with a Shia minority in the cities of Medina, Mecca and Jeddah. Many consider themselves more cosmopolitan because Hejaz was for centuries a part of the great empires of Islam from the Umayyads to the Ottomans.[38]