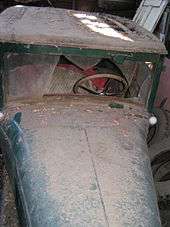 A barn find is a classic car or motorcycle that has been discovered, often in derelict condition. The term comes from their tendency to be found in places such as barns and outbuildings where they have been stored for many years. The term usually applies to vehicles that are rare and valuable, and which are consequently of great interest to car collectors and enthusiasts despite their poor condition.

In the past, barn find cars were typically subjected to exhaustive restoration, to return them to a condition close to that when they were built. However, the current trend is to treat the cars more sympathetically, to avoid restoration that removes evidence of the car's history and to place greater value on any original features the car retains even if they're in poor condition. In some cases, intense restoration can actually lower a car's value[1][2]