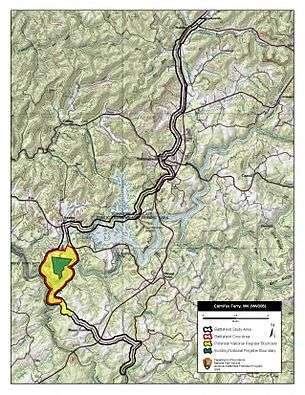 The Battle of Carnifex Ferry took place on September 10, 1861 in Nicholas County, Virginia (now West Virginia), as part of the Operations in Western Virginia Campaign during the American Civil War. The battle resulted in a Union strategic victory that contributed to the eventual Confederate withdrawal from western Virginia. The campaign helped pave the way for the subsequent creation of the separate state of West Virginia.

The battle took its name from a former settlement, which was named after the local Carnefix family.[2]

In late August 1861, Confederate forces under Brig. Gen. John B. Floyd crossed the Gauley River and surprised the 7th Ohio Infantry under Col. Erastus Tyler at Kessler's Cross Lanes. Outnumbered, Tyler's inexperienced men routed, and Floyd camped near Carnifex Ferry. The Confederates began throwing up entrenchments on the Henry Patteson farm (located on the rim of the Gauley River Canyon near Summersville).

Concerned about Floyd's drive to reclaim the Kanawha Valley, Union Brigadier General William S. Rosecrans led three brigades of infantry southward from Clarksburg to support Tyler's regrouped regiment. Moving into position on the afternoon of September 10, Rosecrans advanced against Floyd's campsite and attacked. The Confederate lines repulsed the attacks and the Federal casualties were significantly higher than the defenders. The strength of Rosecrans's artillery proved to be problematic however, and Floyd decided to retreat that night across the ferry to the south side of the Gauley River. He subsequently moved eastward to Meadow Bluff near Lewisburg.

Floyd, seeking to deflect the blame, placed the responsibility for the defeat on his co-commander Brigadier General Henry A. Wise, furthering the dissension that marked the Confederate high command in western Virginia.

In October 1935, the battlefield was preserved as Carnifex Ferry Battlefield State Park.[3]