The Western Virginia Campaign, also known as Operations in Western Virginia or the Rich Mountain Campaign, occurred from May to December 1861 during the American Civil War.[1] Union forces under Major General George B. McClellan invaded the western portion of Virginia; this area occupied by the Union later became the state of West Virginia. Although Confederate forces would make several raids into the area throughout the remainder of the war, they would be unable to reoccupy the state.

Western Virginia was an important source of minerals the Confederates needed for the production of arms and ammunition. It also contained several roads and turnpikes which would grant the Union access to Tennessee, North Carolina, and the Shenandoah Valley, while the Baltimore and Ohio Railroad in the northern part of the area connected the eastern Union states to the Midwest.[2] 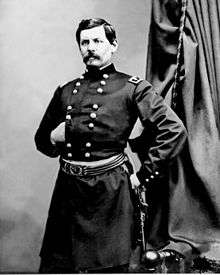 George B. McClellan, Union commander in western Virginia from May to June 1861

In April 1861 a Virginia state convention voted to secede and join the Confederacy. However, there was much opposition to this action from the western counties of the state, which were economically tied closer to western Pennsylvania and Ohio than to eastern Virginia. Following the secession vote in Richmond, John Carlile, a Unionist leader from northwest Virginia, led a meeting at Clarksburg which called for a convention to meet at Wheeling the next month for determining what steps "the people of Northwest Virginia should take in the present emergency."[3] To organize Union forces in the area, George B. McClellan was appointed commander of the Department of the Ohio, covering Ohio, Indiana, Illinois, western Pennsylvania, and western Virginia. He gathered several regiments raised in Ohio, Indiana, and western Virginia and moved into Virginia in early May, moving along the Baltimore and Ohio Railroad and the Kanawha River.[4]

The Confederates appointed several commanders to organize troops in western Virginia: Colonel George A. Porterfield in northwestern Virginia, and Brigadier Generals John B. Floyd and Henry A. Wise in the Kanawha Valley. This divided command structure prevented the Confederates from coordinating their response to the Union invasion; in addition, General Robert E. Lee, commander of the Virginia militia forces, underestimated the strength of Unionist support in western Virginia.[5]

Confederate Colonel Porterfield concentrated a force of 775 new recruits at the town of Philippi during the month of May. On June 3, a Union column under the command of Brigadier General Thomas A. Morris launched a two pronged attack on the Confederate camp. The Confederates fired a single volley and then retreated from the town. Only a few were wounded on each side.[6]

During the Confederate retreat from Rich Mountain, Garnett deployed a small force of skirmishers at a ford at the Cheat River in order to delay the Union pursuit. However, Garnett was killed by a Union volley, thus becoming the first general officer of either army to die in the war. The Confederate force was routed.[8]

The Confederate brigade of Floyd attacked a Union regiment under Colonel Erastus Tyler at Kessler’s Cross Lanes and routed it, temporarily securing the eastern Kanawha Valley for the Confederates.[9]

Brigadier General William S. Rosecrans took three brigades from Clarksburg and attacked Floyd’s brigade at Carnifex Ferry. Although the Confederates were able to hold off the Union attacks, they were outnumbered and were forced to retreat that night.[10]

During the summer, the Union army concentrated their forces to protect the main highways through western Virginia. Brigadier General Joseph J. Reynolds commanded the Union garrison on Cheat Mountain that was supposed to protect the Staunton and Parkersburg Turnpike. Lee attempted to drive this force off the mountain with a complicated plan involving several columns which would converge on and surround the garrison. However, one of the brigade commanders who was scheduled to start the attack retreated at the last minute, forcing Lee to cancel the offensive.[11] 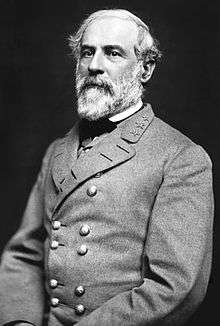 Robert E. Lee would be blamed for the Confederate defeats in western Virginia

The Union army would occupy the western region of Virginia for the rest of the war, despite several raids by the Confederates into the area. West Virginia would later be split from the Department of the Ohio and be formed into a new Department of Western Virginia.[14] The Wheeling convention eventually organized a new state government for the region, which would be admitted to the Union as the state of West Virginia in 1863.[15] Due to his victories in western Virginia, McClellan's reputation quickly grew in the North, where the newspapers called him the “Young Napoleon.” Following the Union defeat at the First Battle of Bull Run, he was given command of the Army of the Potomac.[16]