The Battle of St. George's Caye was a short military engagement that lasted from 3 to 10 September 1798, off the coast of what is now Belize. However, the name is typically reserved for the final battle that occurred on 10 September. The Spaniards had previously attempted to expel the Settlers on six occasions, most recently in 1779.[1] 10 September 1798 marked the final Spanish attempt to take over the area. Today, the Battle of St. George's Caye is a national public and bank holiday. However, the symbolic meaning and significance of celebrating the 10th varies upon class and ethnic backgrounds.

The battle took place between an invading force from Mexico, attempting to assert Spanish claims to present-day Belize, and a small force of resident woodcutters called Baymen, who fought for their livelihood assisted by black slaves. After the final two and a half-hour battle, ravaged by sickness, the Spaniards withdrew and the British declared themselves winners.

The territory that is now Belize was under dispute from as early as the mid-1750s by Great Britain and Spain. Although Spain never occupied Belize, she considered it part of her Central American territories, such as Mexico and Guatemala. The British had entered the territory as of 1638 to harvest logwood and later mahogany. Spain recognised this trade in the Treaty of Paris (signed in 1763[2]) but did not undertake to draw boundaries (which would have suggested that Spain was giving up claims of sovereignty to the area), leading to further disputes. Indeed, from 1779 to 1782 the settlement was abandoned, its settlers, known as the Baymen, and their African slaves having been deported to Havana, Cuba following a Spanish attack. 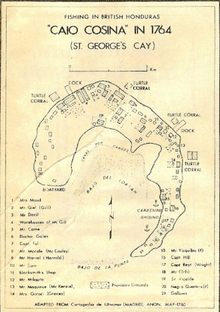 Treaty of Versailles and the Superintendency

In 1783, hostilities were brought to an end by the signing of the Treaty of Versailles, which allowed the Baymen rights between the Belize and Hondo rivers; this was extended with the 1786 Convention of London to the Sibun River. Cutting rights were granted to the settlers on the condition that the settlement be recognised as belonging to Spain; Superintendent Col. Edward Marcus Despard was to administer the terms of the treaty. Due to conflicts with the inhabitants Despard resigned, but by 1796 it was clear the issue would have to be settled.

The British ships that were sent from Jamaica to assist the baymen were the Merlin, Teazer and Tickler.

Humphreys relates that in a 1796 visit to the area, Visitador Juan O'Sullivan claimed the British were encroaching on Spanish territory in Mexico by cutting near the Hondo. Upon his return to Spain, hostilities broke out between Great Britain and Spain as a result of the Napoleonic Wars. The Spanish viewed the situation seriously and determined to remove the British.

Colonists appealed to Jamaican Lieutenant Governor Alexander Lindsay, 6th Earl of Balcarres, for assistance. Even though he was in the midst of the Maroon Wars, Balcarres nonetheless sent muskets and ammunition to the settlement and a further shipment arrived on Commander Thomas Dundas' ship HMS Merlin in December 1796. But upon his arrival, Dundas noted panic in the settlement and the subsequent dispatching of slaves to cut logwood instead of preparing to defend the settlement.

Balcarres then named Major (promoted to Lt. Colonel) Thomas Barrow Superintendent of the settlement. Barrow, a seasoned veteran of war according to Humphreys, immediately began whipping the unruly Baymen into shape, and martial law, stopping all activities in the settlement, was declared on 11 February 1797. On 18 March, magistrates Thomas Potts, Thomas Graham and Marshall Bennett all asked Barrow whether there were any incoming messages from Jamaica. Barrow admitted that more help would be on the way soon, to alleviate the fears of the Baymen, but Humphreys calls the actions of Potts and company "cowardly" and says that even after that reassurance morale was low.

Impatient with the plans to defend the settlement, the Baymen called a public meeting for 1 June 1797. At this meeting, the Baymen voted 65 to 51 to defend the settlement and cooperate with Barrow. This initial support wavered considerably between then and September 1798, as reports came in of the size of the Spanish fleet. Don Arturo O'Neill Tirone, Yucatán Governor and Commander of the expedition, had secured:

This estimate was severely reduced due to outbreaks of yellow fever and dissent in the Spanish army. Nevertheless, it was enough to frighten the Baymen into posting lookouts near the boundaries of the territory.

The Merlin's captain in 1798 was John Moss, a strategist on the order of Barrow. By 18 July 1798 the fleet had reached Cozumel, leading the settlers to agree to arm their slaves, an act that affected the outcome of the battle due to the slaves' knowledge of warfare. There were still some who were cautious and demanded evacuation, including Potts, but Balcarres ignored them and imposed martial law on 26 July. The Settlement lineup consisted of the following:

Merlin, two sloops, Towzer and Tickler, with one 18-pounder gun and 25 men each, and under the command of two merchant captains, Mr. Gelston and Mr. Hosmer, who brought with them some of their crew; Mermaid, with one short 9 pounder and 25 men; the schooners, Swinger and Teazer, with six guns and 25 men each, Swinger having four 6-pounder guns and two 4-pounders, and Teazer six 4-pounders; and eight gun-flats, each with one 9-pounder and 16 men. Except for the crews of Towser and Tickler, the rest of the crews consisted of 354 volunteers from the "Colonial Troops".[3] In addition there were 700 troops ready to deter attack by land.

From 3 to 5 September, the Spaniards tried to force their way through Montego Caye shoal, blocked by the defenders. The military commanders, Moss and Barrow, differed on where to put their resources for the next phase of the fight: Barrow thought they would go to the land phase, while Moss decided on defending St. George's Caye. Moss arrived in time to stop the Spaniards, setting the stage for 10 September.

At 1:00 p.m. that afternoon, the Spaniards and British lined up off St. George's Caye. The Spaniards stormed through the channel, and at 1:30 engaged the British in a two-hour fight which ended in defeat for the confused Spaniards. Moss reported no one killed and the Baymen in good spirits. Barrow was dispatched and arrived in time to see the end of the battle and prevent the slave men from boarding the enemy. The Spaniards were in full retreat by 13 September, and Barrow agreed to send vessels to further push the Spaniards back.

Conditions in Belize did not improve much after the battle, though the threat of Spanish attacks decreased significantly.

On the 100th anniversary of the battle, the colonial government declared the 9th and 10 September a national holiday. It was organized by a Centennial Committee as part of an ethnic and middle-class narrative by Creoles in Belize Town to assert their status as natives and equal partners to the whites in the colony of British Honduras, now Belize.[4] The chief advocates in the Committee were Henry Charles Usher, Wilfred A. Haylock, Benjamin Fairweather, and Absalom Hyde. They held that the Battle represented the heroic contribution of the Baymen and slaves to the colony. In their speeches, they said that had it not been for the Baymen and slaves fighting “shoulder to shoulder” British Honduras would have ended up being a settlement like Cuba or the Philippines. They argued that while the slaves could have escaped, they stayed and defended the settlement. The Centennial celebrations has been interpreted a means through which the middle-class Creoles sought to gain recognition in the society as “true patriots”.[5] Today, the event is celebrated as St. George's Caye Day on the 10 of September. It is considered a national and historic event to recognize the efforts of the Baymen and slaves, as ancestors of Belize. In 1998 Belize issued three coins to commemorate the 200th anniversary of the battle. These consisted of a cupro-nickel $2, a 0.925 silver $10 and a 0.917 gold $100. The obverse features a three-masted sailing vessel from the national coat-of-arms. The reverse features the HMS Merlin and two of the oar-powered flat boats.