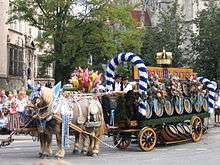 The Oktoberfest in Munich, the most widely-known festival of Bavarian culture, held since 1810 (2006 photograph).

Bavarians (Bavarian: Boarn, Standard German: Bayern) are an ethnographic group of Germans of the Bavaria region, a state within Germany. The group's dialect or speech is known as the Bavarian language, native to Altbayern ("Old Bavaria"), roughly the territory of the Electorate of Bavaria in the 17th century.

Like the neighboring Swabians and Austrians, Bavarians are traditionally Catholic. In much of Altbayern, membership in the Catholic church remains above 70%,[1] and the center-right Christian Social Union in Bavaria (successor of the Bavarian People's Party of 1919–1933) has traditionally been the strongest party in the Landtag,[2] and also the party of all Ministers-President of Bavaria since 1946, with the single exception of Wilhelm Hoegner, 1954–1957.

There is no ethno-linguistic distinction between Bavarians and Austrians. The territory of Bavaria has changed significantly over German history;[3] in the 19th century the Kingdom of Bavaria acquired substantial territories of Franconia and Swabia, while having to return territories to Austria who had become Bavarian only a few years earlier. Thus, only three of the seven administrative regions of the state of Bavaria are culturally Bavarian: Upper Bavaria (Oberbayern), Lower Bavaria (Niederbayern) and the Upper Palatinate (Oberpfalz), to the exclusion of Bavarian Franconia (historically inhabited by Franks) and Bavarian Swabia (inhabited by Swabians).

The Bavarian language is divided into three main dialects:

Further information: History of Bavaria and House of Wittelsbach 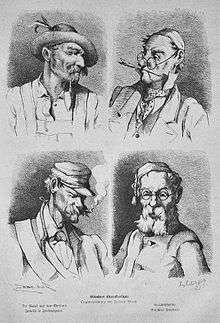 Bavarii or Baiuvarii was the term for a population from the Bohemian Forest area (which had been the territory of the Boii during antiquity) from the 6th century; the name is Latinized from a possible self-designation *Baio-warioz, apparently intended to mean "men of Bohemia". "Bohemia" (Boiohaemum), apparently meaning "Boii home" in a Germanic language, was a term already mentioned by Tacitus in his Germania at the end of the 1st century AD), by which time the Celtic Boii had already long left the area, leaving it to be settled by Suevic Germanic groups in close contact with the Romans, such as the Marcomanni. On the southern side of the river Danube was the Roman controlled province of Raetia.

Bavarians are first mentioned in the mid 6th century, in the foothills north of the Alps, on both sides of the Danube river. It is difficult to distinguish the mobile and mixing groups of the Danube in this period archaeologically. The timing comes after the period when the neighbouring Alamanni (to the east) and Thuringians (to the north) had come under Frankish hegemony, and in Italy the kingdoms of Theoderic and Odoacer had come to and end, creating a new power vacuum in the Alpine region. They seem to have been closely related to the Lombards who were developing as a force to the east of them. Their legal system shows heavy Roman influence, and their unification appears to have been under a Duke installed by the Franks. (Old Bavarian law codes refer to five main lineages.)[4]

The Danubian frontier between the Roman empire and "Germania" had by this time become a region where older populations had been added to significantly by generations of Roman border troops, Germanic clients, and then various "barbarian" peoples from outside the empire, some of whom had been under the hegemony of Attila the Hun.[5] "Elbe Germans", came from the Elbe river to the north, which was under Thuringian rule, and is where the Lombards had also been. But also more northern groups had moved along the Elbe from the direction of the North Sea, as did some Saxons who joined the Lombards, and possibly the Heruls. Also, East Germanic groups such as the Goths had entered the Pannonian region east of the Bavarians in the generations leading up to the empire of Attila. These peoples had not only contributed to the Hunnic empire, but also sometimes been settled peacefully as Roman foederati.

Also entering the area, more contemporary with the Bavarians and Lombards, were Slavs and Avars, who particularly settled the Upper Palatinate as well as around Regensburg itself (distr. Großprüfening)[6][7][8][9]

Neighboring the emerging Bavarian people in the 6th to 7th centuries were the Alamanni to the west (with the Lech River as boundary, which remains a dialectal division today), and Thuringians to the north, both dominated to some extent by the Franks as were the Bavarians. (In the late 7th century however, there was a period where Radulf, King of Thuringia rebelled and some independence was returned to these three regions for a while.[10]) Slavs and Avars were settling to the north-east, and Goths and Langobards to the east and south were later displaced by Slavs and Magyars.

Much like was the case in neighboring Alemannia, Bavaria was nominally Christian by virtue of being ruled by Christian dukes from the 6th century, but Christianization of its population was a gradual process lasting throughout the 7th century and into the 8th; Saint Corbinian was sent by Pope Gregory II to minister to duke Grimoald and work towards the evangelization of Bavaria; he became the first bishop of Freising. A Diocese of Laureacum (Lorch) had been in existence since the 4th century, in the 8th century moved to Passau, which became a bridge-head for the Christianization of Austria and Hungary. The Bishopric of Regensburg was founded in 739 by Boniface. The Lex Baiuvariorum was a codex of Germanic law, comprising 23 articles of traditional law recorded in the 740s. Bavaria within the Carolingian Empire was bordering on Swabia in the west, Thuringia in the north, Lombardy in the south and Slavic Carinthia in the east.

The Duchy of Bavaria was a stem duchy of the Holy Roman Empire, established in the 10th century, derived from an earlier duchy ruled by the Frankish Agilolfings during the 6th to 8th centuries.

The Margraviate of Austria was formed an eastern march to the Duchy of Bavaria in 976, and became a duchy in its own right, the Duchy of Austria, in 1156, in the 13th century falling under the dominion of the House of Habsburg. In the 14th and 15th centuries, upper and lower Bavaria were repeatedly subdivided. Four Duchies (or "partial duchies", Teilherzogtümer) existed after the division of 1392: Lower Bavaria-Straubing, lower Bavaria-Landshut, Bavaria-Ingolstadt and Bavaria-Munich. 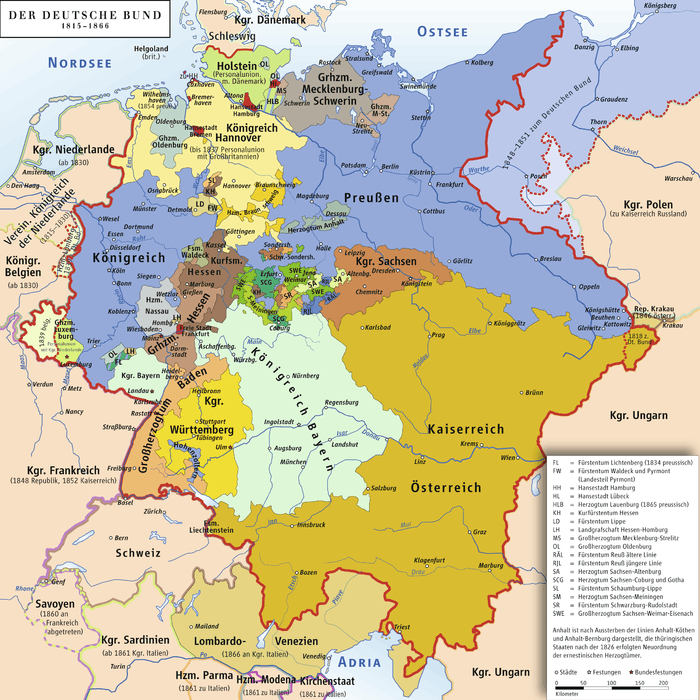 Kingdom of Bavaria within the German Confederation 1816, including the Rhenish Palatinate

The Kingdom of Bavaria was established at the Peace of Pressburg (1805), in the wake of the French victory at Austerlitz. The kingdom's territory fluctuated greatly over the following years, eventually fixed at the Treaty of Paris (1814), which established most of what remain the borders of the modern state. The kingdom in 1837 was divided into eight administrative regions (Regierungsbezirke), Upper Bavaria, Lower Bavaria, Franconia, Swabia, Upper Palatinate and Palatinate. Ludwig I of Bavaria changed his royal titles to Ludwig, King of Bavaria, Duke of Franconia, Duke in Swabia and Count Palatinate of the Rhine.