Not to be confused with Germany. For other uses, see Germania (disambiguation). 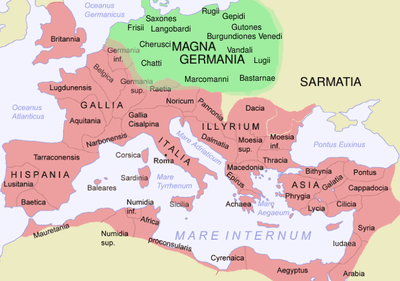 Germania (/dʒərˈmeɪniə/; Greek: Γερμανία Germanía) was the Roman and Greek term for the geographical region in north-central Europe inhabited mainly by Germanic peoples.

It extends from the Danube in the south to the Baltic Sea, and from the Rhine in the west to the Vistula. The Roman portions formed two provinces of the Empire, Germania Inferior to the north (present-day Netherlands), and Germania Superior to the south (Switzerland, southwestern Germany, eastern France).

Germania was inhabited mostly by Germanic tribes, but also Celts, proto-Slavs, Balts and Scythians. The population mix changed over time by assimilation, and especially by migration. The ancient Greeks were the first to mention the tribes in the area. Later, Julius Caesar wrote about warlike Germanic tribesmen and their threat to Roman Gaul, and there were military clashes between the Romans and the indigenous tribes. Tacitus wrote the most complete account of Germania that still survives.

The origin of the term Germania is uncertain, but was known by Caesar's time, and may be Gallic in origin.

Germania extends from the Rhine eastward to the Vistula river, and from the Danube river northward to the Baltic Sea.[1] According to Friedrich Engels in his book The Origin of the Family, Private Property and the State (first published in 1884) Germania covered an area of 500,000 km2 or 190,000 sq mi and had a population of 5,000,000 in the 1st century BC.[2] The areas west of the Rhine were mainly Celtic (specifically Gaulish) and became part of the Roman Empire[3][4] in the first century BC.

Some Germani, perhaps the original people to have been referred to by this name, had lived on the west side of the Rhine. At least as early as the 2nd century BC this area was considered to be in "Gaul", and became part of the Roman empire in the course of the Gallic Wars (58–50 BC). These so-called Germani cisrhenani lived in the region of present-day eastern Belgium, the southeastern Netherlands, and stretching into Germany towards the Rhine. During the period of the Roman empire, more tribes settled in areas of the empire near the Rhine, in territories controlled by the Roman Empire. Eventually these areas came to be known as Lesser Germania, while Greater Germania (Magna Germania; it is also referred to by names referring to its being outside Roman control: Germania libera, "free Germania") formed the larger territory east of the Rhine.

Origins of the term 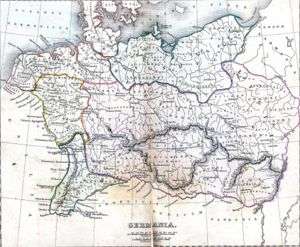 Depiction of Magna Germania in the early 2nd century

The name came into use after Julius Caesar and whether it was used widely before him amongst Romans is unknown. The term may be Gallic in origin. Caesar reports hearing from his Remi allies that the term Germani was used for the group the Romans called the Germani Cisrhenani, and that these tribes had historically come from over the Rhine. So the name Germania seems to have been extended to cover the similar tribes in the area understood to be their homeland.[5][6] Some generations later, Tacitus claimed that this is precisely what happened, saying that the Tungri of his time, who lived in the area which had been home to the Germani Cisrhenani, had changed their name, but had once been the original Germani. Tacitus wrote in AD 98:

For the rest, they affirm Germania to be a recent word, lately bestowed. For those who first passed the Rhine and expulsed the Gauls, and are now named Tungrians, were then called Germani. And thus by degrees the name of a tribe prevailed, not that of the nation; so that by an appellation at first occasioned by fear and conquest, they afterwards chose to be distinguished, and assuming a name lately invented were universally called Germani.[7]

The Germania of Caesar and Tacitus was not defined along linguistic lines as is the case with the modern term "Germanic". They knew of Celtic tribes living in Magna Germania (Greater Germania), and what we now term Germanic tribes living in Gaul, then a predominantly Celtic region. It is also not clear that they distinguished the tribes into linguistic categories in any exact way. The language of the Germani Cisrhenani and their neighbours across the Rhine is still unclear. Their tribal names and personal names are generally considered Celtic, and there are also signs of an older Belgic language which once existed between the contact zone of the Germanic and Celtic languages.

Germania in its eastern parts was likely also inhabited by early Baltic and, centuries later, Slavic tribes. These parts of eastern Germania are sometimes called Germania Slavica in modern historiography.

Germania was inhabited by different tribes, most of them Germanic but also some Celtic, proto-Slavic, Baltic and Scythian peoples. The tribal and ethnic makeup changed over the centuries as a result of assimilation and, most importantly, migrations. The Germanic people spoke several different dialects.

Classical records show little about the people who inhabited the north of Europe before the 2nd century BC. In the 5th century BC, the Greeks were aware of a group they called Celts (Keltoi). Herodotus also mentioned the Scythians but no other tribes. At around 320 BC, Pytheas of Massalia sailed around Britain and along the northern coast of Europe, and what he found on his journeys was so strange that later writers refused to believe him. He may have been the first Mediterranean to distinguish the Germanic people from the Celts. Contact between German tribes and the Roman Empire did take place and was not always hostile. Recent excavations of the Waldgirmes Forum show signs that a civilian Roman town was established there, which has been interpreted to mean that Romans and Germanic tribesmen were living in peace, at least for a while.[8] 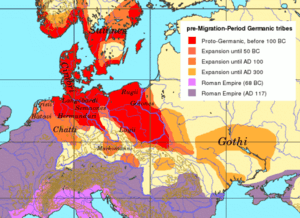 Map showing the distribution of the Germanic tribes in Proto-Germanic times, and stages of their expansion up to 50 BC, AD 100 and AD 300. The extent of the Roman Empire in 68 BC and AD 117 is also shown.

The Romans under Augustus began to conquer and defeat the peoples of Germania Magna in 12 BC, having the Legati (generals) Germanicus and Tiberius leading the Legions. By 6 AD, all of Germania up to the River Elbe was temporarily pacified by the Romans as well as being occupied by them. The Roman plan to complete the conquest and incorporate all of Magna Germania into the Roman Empire was frustrated when Rome was defeated by the German tribesmen in the Battle of the Teutoburg Forest in 9 AD. Augustus then ordered Roman withdrawal from Magna Germania (completed by AD 16) and established the boundary of the Roman Empire as being the Rhine and the Danube.