Beijing University of Posts and Telecommunications 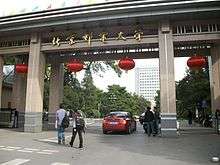 Main gate of Beijing University of Posts and Telecommunications

The Beijing University of Posts and Telecommunications (BUPT) (Chinese: 北京邮电大学) is a key national university distinguished by the teaching and research in the field of cable communications, wireless communications, computer, and electronic engineering. BUPT comprises 17 schools, and has an international school program with Queen Mary, University of London.

The university offers a wide range of subjects including engineering, management, humanities and sciences, and most of its subjects and disciplines are related to applied science and engineering. BUPT enjoys a nationwide reputation for innovation and excellence in advanced research and learning in information and communication technology. It serves as one of the most important teaching and research bases for information technology and telecommunication industry in China.

Directly administered by the Ministry of Education, BUPT is one of the first 61 universities that were listed in the Project "211" Universities in 1995, which aims at strengthening 100 National Key Universities as a national priority for the 21st century. Since then, BUPT has greatly improved its quality of education, scientific research, management and institutional efficiency. In order to provide favorable academic environment, BUPT has established a complete campus network embracing the library, staff rooms, research centers, dormitories etc. Great efforts have also been made in bringing up a number of academic leaders and competent teachers who have high academic attainments and are prestigious both at home and abroad. In particular, the training of young academic leaders has been accelerated, and more and more outstanding talents are attracted to work at BUPT.

BUPT is one of the 56 universities in China that are authorized to formally form a Graduate school by the General Office of the Academic Degree of the State Council after a long time of painstaking experiment. The Graduate School has developed complete graduate programs that cover the disciplines of engineering, science, economics, administration, law and philosophy. It is also one of the earliest universities in China that has officially been authorized to offer doctoral and master programs.

BUPT endeavors to foster students mentally and academically. Except for their daily academic studies, students take an active part in various national and international contests. Every year BUPT students take part in the National Undergraduate Electronic Design Contest, National and International Undergraduate Math Modeling Contest and many other contests. Their achievements are always among the best of the successful higher learning institutions competing in China. In the International Math Modeling Contest in the United States in 2004, four delegations of BUPT won the First-Class Award and two delegations won the Second-Class Award, taking first place among the institutions of higher learning that participated in the contest.

BUPT’s graduates boast the top employment rate among Chinese universities, about 98%, and most of them are employed by famous IT companies at home and abroad.

BUPT has one ministry-level Engineering Center under the leadership of Ministry of Education-"Research Center of Information Network Engineering", and one National University Science Park-"Information Valley".

And BUPT is one of eight universities that took part in the initiation construction of "China Education and Research Network" (CERNET) in 1994. It also takes part in the demonstrating project of the CERNET2, a model project of the next-generation Internet (NGI), which adopts the pure Ipv6 protocol.

BUPT possesses all the top-end experimental instruments necessary for Information and Communication sciences, with one of the highest instrument-value to student ratios among all of China’s higher educational institutions. And BUPT’s library houses 970,000 books of 152,000 kinds, notably providing first-class modern data retrieval and information inquiry services.

BUPT is also engaged in business through its Telecomm Enterprises Group and BUPT Logistic Industry and Service Group.