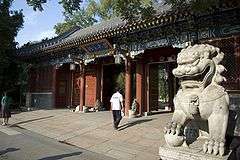 Peking University's West Gate, one of the symbols of the university campus

Peking University[3] (abbreviated PKU and colloquially known in Chinese as Běidà 北大; Chinese: 北京大学, pinyin: Běijīng Dàxué), is a major Chinese research university located in Beijing and a member of the C9 League. It is the first modern national university established in China, founded as the Imperial University of Peking in 1898 as a replacement of the ancient Taixue or Guozijian, or Imperial Academy.[4] It also served as the highest administration for education (ministry of education) in China at the beginning of its founding.[5] By 1920, it had become a center for progressive thought. Peking University is consistently ranked as the top higher learning institution in mainland China.[6][7][8][9][10] In addition to academics, Peking University is especially renowned for its campus grounds,[11][12][13] and the beauty of its traditional Chinese architecture.[14]

Throughout its history, the university has educated and hosted many prominent modern Chinese thinkers, including figures such as: Mao Zedong, Lu Xun, Gu Hongming, Mao Dun, Li Dazhao, and Chen Duxiu.[15] Peking University was influential in the birth of China's New Culture Movement, May Fourth Movement, the Tiananmen Square protest of 1989 and many other significant events.[16]

When it was established on July 3, 1898, the school was known as the Imperial University of Peking (simplified Chinese: 京师大学堂; traditional Chinese: 京師大學堂; pinyin: Jīngshī Dàxuétáng). It was established to replace Taixue or Guozijian, or Imperial Academy, as part of the Hundred Days' Reform. In 1912, following the Xinhai Revolution, the Imperial University was renamed "National Peking University" (simplified Chinese: 国立北京大学; traditional Chinese: 國立北京大學; pinyin: Guólì Běijīng Dàxué). The noted scholar Cai Yuanpei was appointed president on January 4, 1917, and helped transform the university into the country's largest institution of higher learning, with 14 departments and an enrollment of more than 2,000 students. Cai, inspired by the German model of academic freedom, recruited an intellectually diverse faculty that included Hu Shih, Chen Duxiu, and Lu Xun. In 1919, students of Peking University formed the bulk of the protesters of the May Fourth Movement. Efforts by the Beiyang government to end the protests by sealing off the Peking University campus led to Cai's resignation. In 1920, Peking University became the first Chinese university to accept female students. 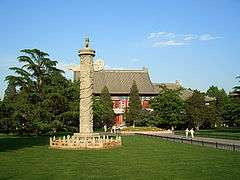 View of the central campus

After the outbreak of the Second Sino-Japanese War in 1937 (and the resulting expansion of Japanese territorial control in east China), Peking University moved to Changsha and formed the Changsha Temporary University along with Tsinghua University and Nankai University. In 1938, the three schools moved again, this time to Kunming, and formed the National Southwestern Associated University. In 1946, after World War II, Peking University moved back to Beijing. At that time, the university comprised six schools (Arts, Science, Law, Medicine, Engineering, and Agriculture), and a research institute for humanities. The total student enrollment grew up to 3,000.

In 1949, after the People's Republic of China was established, Peking University lost its "national" appellation to reflect the fact that all universities under the new socialist state would be public. In 1952, Mao Zedong's government re-grouped the country's higher education institutions with individual institutions tending to specialize in a certain field of study. As a result, some arts and science faculties of Tsinghua University and former Yenching University were merged into Peking University. At the same time, however, the university lost its Law, Medicine, Engineering and Agriculture schools. These schools and faculties were either merged into other universities or to found new colleges. During the re-grouping, Yenching University was closed up. Peking University moved from downtown Beijing to the former Yenching campus.

The first disturbances of the Cultural Revolution began at Peking University in 1966; education there ceased between 1966 and 1970.

In 2001, Peking University established the Yuanpei Program which was formalized in 2007 as Yuanpei College, named in honor of a highly respected former university president Cai Yuanpei. The college hosts an elite undergraduate liberal program for select students.

In 2001, Peking University set up a satellite campus in Shenzhen. The university's second business school was launched on this campus in 2004. 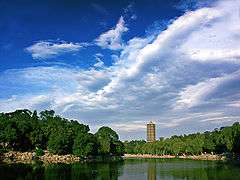 The Weiming Lake, located in the north center of the university campus 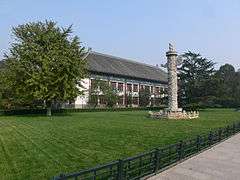 One of the administrative buildings with the huabiao 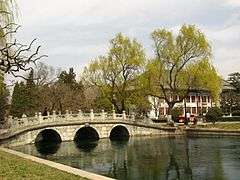 A stone bridge inside the campus

At present, Peking university has 216 research institutions and research centres, including 2 national engineering research centers, 81 key national disciplines, 12 national key laboratories. With 11 million holdings, the university library is the largest of its kind in Asia.[24]

The university has made an effort to combine the research on fundamental scientific issues with the training of personnel with high level specialized knowledge and professional skill as demanded by the country's modernization. Peking University, the Georgia Institute of Technology, and Emory University jointly administer the Wallace H. Coulter Department of Biomedical Engineering Program, which is ranked the 2nd in the United States [25][26]

Peking University has been becoming a center for teaching and research, consisting of diverse branches of learning such as pure & applied sciences, social sciences & humanities, and sciences of management & education.

Many domestic rankings have placed Peking University among the top universities in mainland China.[6] In 2015, the Chinese University Alumni Association in partnership with China Education Center considered it 1st among all Chinese universities.[6] 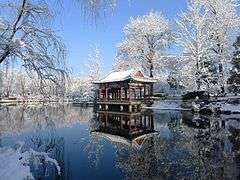 Peking University during winter. The campus is situated on a former imperial garden.

The campus of Peking University was originally located northeast of the Forbidden City in the center of Beijing, and was later moved to the former campus of Yenching University in 1952. The main campus is in northwest Beijing, in Haidian district, near the Summer Palace and the Old Summer Palace; the area is traditionally where many of Beijing's most renowned gardens and palaces were built.

The university campus is in the former site of the Qing Dynasty imperial gardens and it retains much traditional Chinese-style landscaping, including traditional houses, gardens, pagodas, as well as many notable historical buildings and structures. There are several gates that lead into campus — East, West and South gates, with the West Gate being the most well known for the painted murals on its ceiling. Weiming lake is in the north of the campus and is surrounded by walking paths and small gardens.

The university hosts many museums, such as the Museum of University History and the Arthur M. Sackler Museum of Art and Archaeology.[30][31] Notable items in these museums include funerary objects that were excavated in Beijing and date back thousands of years from the graves of royalties of the Warring States period. There are ritual pottery vessels as well as elaborate pieces of jewelry on display. There are also human bones set up in the traditional burial style of that period.[31]

Beyond its main campus, Peking University Health Science Center (PKUHSC) is on Xue Yuan Road where the country's most distinguished colleges are. The PKUHSC's campus is less aesthetically appealing than the main Peking University campus but is nonetheless a fitting site for academics and research.

In 2001, Peking University's Shenzhen campus, the Shenzhen Graduate School, opened its doors. The campus is located in the northwest part of Shenzhen City. 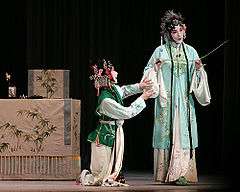 A performance of Kunqu at Peking University

Peking University is well known for its contribution to modern Chinese literature, poetry and art, and for the publications of groundbreaking modern Chinese books such as Hong Zicheng's A History of Contemporary Chinese Literature.[37] Peking University has participated in many joint art-research projects, such as the Center for the Art of East Asia (CAEA) with the University of Chicago,[38] and developing the Peking University, Department of Digital Art and Design with UNESCO.[39][40]

American architect and art historian Talbot Hamlin designed some of the buildings constructed during the 1919 to 1922 period.[42] 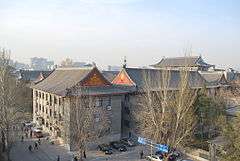 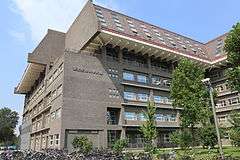 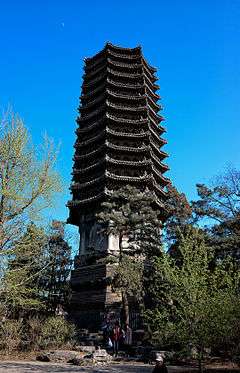 Boya Pagoda by the Weiming Lake, one of the landmarks on the campus

The National School of Development (formerly China Center for Economic Research) is ranked amongst the top five most influential think tanks in China.[43] It organizes comprehensive interdisciplinary research and gathers top-notch academic intelligence in proposing forward-looking strategy, systems, policy and basic theory concerning the sustainable development of China and evolution of world patterns and nurturing talent to fuel this national development.[43]

The National School of Development (NSD) was founded as the China Centre for Economic Research by six returning professors of Peking University including Justin Yifu Lin, Hai Wen and Yi Gang in 1994. Over the years, NSD has made innovative contribution to China's economic education, scientific research and international academic discussion, especially for national policy consultancy.

In 1998, Justin Yifu Lin et al. jointly founded the Beijing International MBA at Peking University (BiMBA),[44] which is ranked among the top six MBA programs by Quacquarelli Symonds in its TopMBA ranking of the best MBA programs in Asia Pacific for the year 2014-2015.[45] BiMBA has also been ranked as the second most valuable full-time MBA in China by Forbes (after CEIBS) [46] and among Asia's best business schools by Bloomberg Business.[47][48]

The university maintains a partnership with the Freie Universität Berlin since 1981.

Mao Zedong, Chen Duxiu, and Li Dazhao, all founders of the Communist Party of China, either taught or held offices in the university. Lu Xun, a notable contemporary writer and influential figure of the Chinese New-Culture Movement, which took place in 1919 and sparked China’s anti-imperialism and anti-feudalism march, was also attached to the university. During the Cultural Revolution, Peking University philosophy faculty Nie Yuanzi notoriously published the first big-character poster. Peking University students also led at the Tiananmen Square Protest of 1989 for Chen Duxiu and Lu Xun's people's democracy.