Born in San Francisco's Chinatown on April 30, 1921, Benjamen Chinn was the ninth of twelve children. He was introduced to photography at the age of ten by his older brother, John, who taught him how to develop and print photos. Together the two assembled a darkroom in the basement of the family home. Throughout his photographic career, Chinn, an engineer by profession, would become known for his skills in the darkroom.

During World War II, he served in the Pacific as an aerial and public relations photographer for the U.S. Army Air Corps. Based at Hickam Field in Hawaii, he and a lone pilot flew reconnaissance missions in bombers that had been converted into unarmed camera planes.

After the war, Chinn returned to San Francisco and was accepted into a new fine art photography program at the California School of Fine Arts (CSFA), now the San Francisco Art Institute. In this program, Ansel Adams and Minor White groomed the next generation of fine art photographers in the so-called “West Coast School of Photography.” Lecturers included Edward Weston, Imogen Cunningham, Lisette Model and Dorothea Lange. "The climax of every year was the five day, early spring trip to visit Edward Weston and to photograph at Point Lobos State Reserve, which his pictures had made famous. Full time concern with photography was nothing new to us, but on this trip the intensity rose like a thermometer held over a match flame."[1] The close-knit circle of teachers and students would become lifelong friends. Chinn was particularly close to Cunningham, and through the end of her life he would often bring dim sum to her house for their lunches together. 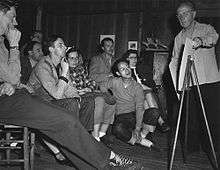 Benjamen Chinn (seated on floor) and other students at Edward Weston's home in Carmel, CA, 1948. Photograph by William Heick

During this time Chinn began photographing San Francisco’s Chinatown. His images exhibit a non-judgmental eye and a natural curiosity about people. He made intimate portraits of everyday life in the post-war era. His photos display an intuitive sense of form and movement and he credited his development to his CSFA painting instructors Dorr Bothwell and Richard Diebenkorn. The photos, many of which were taken from his doorstep, create a unique portrait of Chinatown from an insider’s point of view.[2]

Chinn went on to Europe and photographed Parisian street life from 1950 to 1951 while studying sculpture from Alberto Giacometti at the Académie Julian. He also took painting classes at Fernand Léger’s school, and geography and philosophy at the Sorbonne. He became friends with Léger and Henri Cartier-Bresson. Living in Paris, without a darkroom for the first time, he developed the negatives of the photos he took, but did not print or see any of the images until after he returned to San Francisco.

In 1954, Minor White exhibited some of Chinn’s Paris photos at a show titled Perceptions at the San Francisco Museum of Art (now the San Francisco Museum of Modern Art). White used one of them for the cover of the second edition of Aperture magazine. At this time, Chinn assisted Wayne Miller and Dorothea Lange as part of the West Coast Selection Committee for Edward Steichen's Family of Man exhibition.

In 1953, Chinn went to work for the Sixth United States Army Photo Lab in the Presidio of San Francisco. He met Paul Caponigro, then a twenty-year-old enlisted man doing his military service at the lab. Initially attracted by their mutual interest in classical music, Ben volunteered to train Caponigro in the technical aspects of negative and print making. Caponigro would go on to become a substantial landscape art photographer. Additionally, he introduced Caponigro to his teachers, now friends, from the CSFA: Adams, White, Lange and Cunningham. Caponigro writes, “Through Ben, I felt that I had been admitted into a 'guild' of serious image makers using light and silver emulsions. Ben's own talent and ability with the camera coupled with his willingness to reach out to another human being gave me a great start and the inspiration to extend myself to those searching to develop within the realm of great art.[3]”

Chinn had a thirty-one year career at the army photo lab where he rose to Chief of Photographic Services and later, Chief of Training Aids & Services Division. Though he stopped pursuing photography as a fine art, his life and relationships as a photographer never ceased. He continued to travel with his camera, photographing the Tarahumara Indians in Copper Canyon, Mexico, and the indigenous peoples of Teotitlán.

Throughout his life, Chinn developed and maintained numerous lifelong friendships. He actively participated in social groups that shared his beliefs in religion, the arts, travel and the enjoyment of food and good company – spending hours discussing classical music, films and the books of the day. He continued to photograph with a 35mm camera and shared his artistry through holiday cards and documentary photography support for Project Concern International.

Even after retiring, Chinn's passion for photography continued, as he volunteered at a one-hour photo store in Chinatown developing people's photos.

Benjamen Chinn lived in the family house in Chinatown until February, 2008, when he was moved to an assisted-living facility. He died on April 25, 2009 at Kaiser Permanente Hospital in San Francisco, California.[4]

Benjamen Chinn's work evidenced the influence of the world of black and white art photography in the United States, during the 1940s and 1950s. His work also became influential for many new and already esteemed artists. While his work has had a number of exhibitions (see below), it has largely lain unrecognized until the turn of the 21st century. In more than one of his publications, noted landscape photographer Paul Caponigro has acknowledged the influence that studying with Benjamen Chinn had on him.[5]

Author Alexandra Chang wrote, "His work, varying from still life, to the architecture of San Francisco Chinatown, to portraits, exudes an Atget-like quality of a moment from everyday life frozen in time."[6]

Since his death, a process has been developed to archive Chinn's entire photographic work and digitize it for analysis by artists and scholars.