The Académie Julian (French pronunciation: ​[akademi ʒyljɑ̃])[1] was a private art school for painting and sculpture founded in Paris, France in 1867 by French painter and teacher Rodolphe Julian (1839-1907) that was active from 1868 through 1968.[2] It remained famous for the number and quality of artists who attended during the great period of effervescence in the arts in the early twentieth century.[3][4] After 1968 it integrated with ESAG Penninghen.

Rodolphe Julian established the Académie Julian in 1868 at the Passage des Panoramas, as a private studio school for art students.[5] The Académie Julian not only prepared students to the exams at the prestigious École des Beaux-Arts, but offered independent alternative education and training in arts. "Founded at a time when art was about to undergo a long series of crucial mutations, the Academie Julian played host to painters and sculptors of every kind and persuasion and never tried to make them hew to any one particular line".[2] 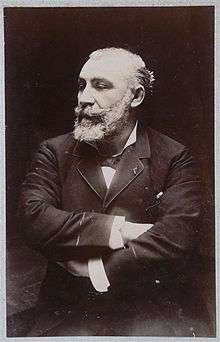 In 1880, women who were not allowed to enroll for study to the École des Beaux-Arts, were accepted by the new Académie Julian. Foreign applicants who had been deterred from entering the Ecole des beaux arts by a drastic French language examination[1] were welcome at the Académie Julian.[6] Men and women were trained separately, and women participated in the same studies as men, including drawing and painting of nude models.[7][8] "Human exchange went forward in an atmosphere that was collegial, easygoing and mutually supportive. It nurtured some of the best artists of the day".[2]

Académie Julian became popular as fertile ground with French as well as foreign students from diverse backgrounds from all over the world,[3] from the United Kingdom,[9] Canada,[10] Hungary.[11] and particularly the United States;[2][12][13] French art critic Egmont Arens claimed in 1924 that American art, at least for a period of time, reflected the teachings of Académie Julian.[14] In 1989, on the occasion of the exhibition at the Shepherd Gallery, in Manhattan, devoted to the Academie Julian in Paris as it existed between 1868 and 1939, John Russell wrote:

"By my count, more than 50 nationalities were represented at the school during its glory years. [...] who gave the school its ethnic richness. [...] To be at the Academie Julian was to be exposed to a kind of white magic that seems to have worked in almost every case. What was learned there stayed forever with alumnus and alumna, and it related as much to the conduct of life as to the uses of brush and chisel." - in The New York Times, John Russell: "An Art School That Also Taught Life", March 19, 1989.[2]

The early success of the Académie was also secured by the famous and respected artists whom Rodolphe Julian employed as instructors: Adolphe William Bouguereau (1825–1905), Henri Royer, Jean-Paul Laurens, Gabriel Ferrier, Tony Robert-Fleury, Jules Lefebvre and other leading artists of that time trained in Academic art.[15] Eventually, Académie Julian students were granted the right to compete for the Prix de Rome, a prize awarded to promising young artists.[16] and participate in the major "Salons" or art exhibitions.

However, a new term L'art pompier had entered the scene as a derisive term for traditional academic art, and a less conservative, freer, more sincere approach to art,[1] corresponding to the Secessionist art movement in Germany and Austria was embraced through a more liberal regime at the Académie Julian. It was followed and fully articulated by the Nabis, avant-garde movement,[17] that participated in paving the way to modern art in 1888-1889.[5]

Académie Julian remained open during World War I, albeit with a lesser number of students. By contrast during World War II, after the 1941 exhibition Vingt jeunes peintres de tradition française[18] considerations on "degenerate art" by the German military administration forced the school to close. In 1946 some of the studios were sold.

For his services to the arts, Rodolphe Julian, described by the Anglo-Irish novelist and critic George Moore as a kind of Hercules, dark-haired, strong, with broad shoulders, short legs, a soft voice and all the charm of the Midi was awarded the Legion of Honour.[2][19]

In 1968, an important year in France's history with the May events, particularly in relation to education, the Académie Julian integrated with ESAG Penninghen.[20]

Notable faculty and alumni of the Académie Julian