Bessel functions are the radial part of the modes of vibration of a circular drum.

Bessel functions, first defined by the mathematician Daniel Bernoulli and then generalized by Friedrich Bessel, are the canonical solutions y(x) of the differential equation

Because this is a second-order differential equation, there must be two linearly independent solutions. Depending upon the circumstances, however, various formulations of these solutions are convenient. Different variations are summarized in the table below, and described in the following sections.

Bessel functions of the first kind, denoted as Jα(x), are solutions of Bessel's differential equation that are finite at the origin (x = 0) for integer or positive α, and diverge as x approaches zero for negative non-integer α. It is possible to define the function by its series expansion around x = 0, which can be found by applying the Frobenius method to Bessel's equation:[3]

where Γ(z) is the gamma function, a shifted generalization of the factorial function to non-integer values. The Bessel function of the first kind is an entire function if α is an integer, otherwise it is a multivalued function with singularity at zero. The graphs of Bessel functions look roughly like oscillating sine or cosine functions that decay proportionally to 1/√x (see also their asymptotic forms below), although their roots are not generally periodic, except asymptotically for large x. (The series indicates that −J1(x) is the derivative of J0(x), much like −sin(x) is the derivative of cos(x); more generally, the derivative of Jn(x) can be expressed in terms of Jn±1(x) by the identities below.) 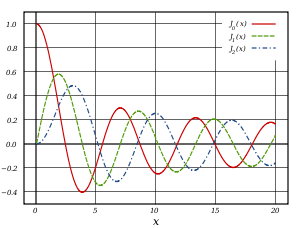 For non-integer α, the functions J α(x) and J−α(x) are linearly independent, and are therefore the two solutions of the differential equation. On the other hand, for integer order α, the following relationship is valid (note that the Gamma function has simple poles at each of the non-positive integers):[4]

Another definition of the Bessel function, for integer values of n, is possible using an integral representation:[5]

Another integral representation is:[5]

This was the approach that Bessel used, and from this definition he derived several properties of the function. The definition may be extended to non-integer orders by one of Schläfli's integrals, for

This expression is related to the development of Bessel functions in terms of the Bessel–Clifford function.

In terms of the Laguerre polynomials Lk and arbitrarily chosen parameter t, the Bessel function can be expressed as[11]

The Bessel functions of the second kind, denoted by Yα(x), occasionally denoted instead by Nα(x), are solutions of the Bessel differential equation that have a singularity at the origin (x = 0) and are multivalued. These are sometimes called Weber functions as they were introduced by H. M. Weber (1873), and also Neumann functions after Carl Neumann.[12] 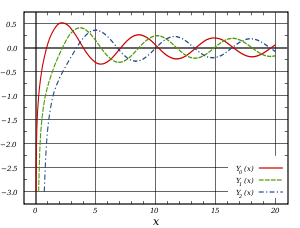 In the case of integer order n, the function is defined by taking the limit as a non-integer α tends to n,

If n is a nonnegative integer we have the series[13]

Yα(x) is necessary as the second linearly independent solution of the Bessel's equation when α is an integer. But Yα(x) has more meaning than that. It can be considered as a 'natural' partner of Jα(x). See also the subsection on Hankel functions below.

When α is an integer, moreover, as was similarly the case for the functions of the first kind, the following relationship is valid:

Another important formulation of the two linearly independent solutions to Bessel's equation are the Hankel functions of the first and second kind, H α(1)(x) and H α(2)(x), defined by:[15]

where i is the imaginary unit. These linear combinations are also known as Bessel functions of the third kind; they are two linearly independent solutions of Bessel's differential equation. They are named after Hermann Hankel.

The importance of Hankel functions of the first and second kind lies more in theoretical development rather than in application. These forms of linear combination satisfy numerous simple-looking properties, like asymptotic formulae or integral representations. Here, 'simple' means an appearance of the factor of the form eif(x). The Bessel function of the second kind then can be thought to naturally appear as the imaginary part of the Hankel functions.

The Hankel functions are used to express outward- and inward-propagating cylindrical wave solutions of the cylindrical wave equation, respectively (or vice versa, depending on the sign convention for the frequency).

Using the previous relationships they can be expressed as:

In particular, if α = m + 1/2 with m a nonnegative integer, the above relations imply directly that

These are useful in developing the spherical Bessel functions (below).

The Hankel functions admit the following integral representations for Re(x) > 0:[17]

The Bessel functions are valid even for complex arguments x, and an important special case is that of a purely imaginary argument. In this case, the solutions to the Bessel equation are called the modified Bessel functions (or occasionally the hyperbolic Bessel functions) of the first and second kind, and are defined by:[19]

when α is not an integer; when α is an integer, then the limit is used. These are chosen to be real-valued for real and positive arguments x. The series expansion for Iα(x) is thus similar to that for Jα(x), but without the alternating (−1)m factor.

Two integral formulas for the modified Bessel functions are (for Re(x) > 0):[22]

The modified Bessel function of the second kind has also been called by the now-rare names: 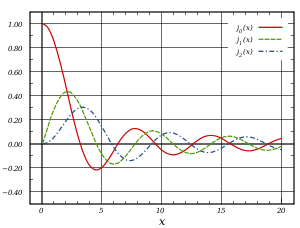 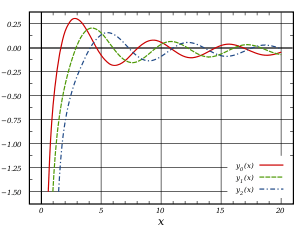 When solving the Helmholtz equation in spherical coordinates by separation of variables, the radial equation has the form:

yn is also denoted nn or ηn; some authors call these functions the spherical Neumann functions.

The spherical Bessel functions can also be written as (Rayleigh's formulas):[26]

The spherical Bessel functions have the generating functions [29]

In the following fn is any of

There are also spherical analogues of the Hankel functions:

In fact, there are simple closed-form expressions for the Bessel functions of half-integer order in terms of the standard trigonometric functions, and therefore for the spherical Bessel functions. In particular, for non-negative integers n:

is the complex-conjugate of this (for real x). It follows, for example, that

The spherical Hankel functions appear in problems involving spherical wave propagation, for example in the multipole expansion of the electromagnetic field.

They satisfy the differential equation:

For example, this kind of differential equation appears in Quantum Mechanics while solving the radial component of the Schrödinger's Equation with hypothetical cylindrical infinite potential barrier. For reference see p. 154, Introduction to Quantum Mechanics by Griffiths, 2nd Edition. This differential equation, and the Riccati–Bessel solutions, also arises in the problem of scattering of electromagnetic waves by a sphere, known as Mie scattering after the first published solution by Mie (1908). See e.g., Du (2004)[31] for recent developments and references.

is sometimes used instead of

The Bessel functions have the following asymptotic forms. For small arguments[3]

, one obtains, when α is not a negative integer:

When α is a negative integer, we have:

For the Bessel function of the second kind we have three cases:

, one cannot write a true asymptotic form for Bessel functions of the first and second kind (unless α is half-integer) because they have zeros all the way out to infinity which would have to be matched exactly by any asymptotic expansion. However, for a given value of arg(z) one can write an equation containing a term of order |z|−1:[32]

(For α = 1/2 the last terms in these formulas drop out completely; see the spherical Bessel functions above.) Even though these equations are true, better approximations may be available for complex z. For example, J0(z) when z is near the negative real line is approximated better by

The asymptotic forms for the Hankel functions are:

For integer order α = n, Jn is often defined via a Laurent series for a generating function:

an approach used by P. A. Hansen in 1843. (This can be generalized to non-integer order by contour integration or other methods.) Another important relation for integer orders is the Jacobi–Anger expansion:

which is used to expand a plane wave as a sum of cylindrical waves, or to find the Fourier series of a tone-modulated FM signal.

is called Neumann expansion of ƒ. The coefficients for ν = 0 have the explicit form

where Ok is Neumann's polynomial.[36]

due to the orthogonality relation

More generally, if ƒ has a branch-point near the origin of such a nature that

Another way to define the Bessel functions is the Poisson representation formula and the Mehler-Sonine formula:

where ν > −1/2 and z ∈ C.[38] This formula is useful especially when working with Fourier transforms.

where Z denotes J, Y, H(1), or H(2). (These two identities are often combined, e.g. added or subtracted, to yield various other relations.) In this way, for example, one can compute Bessel functions of higher orders (or higher derivatives) given the values at lower orders (or lower derivatives). In particular, it follows that:[40]

where Cα denotes Iα or eαπiKα. These recurrence relations are useful for discrete diffusion problems.

Because Bessel's equation becomes Hermitian (self-adjoint) if it is divided by x, the solutions must satisfy an orthogonality relationship for appropriate boundary conditions. In particular, it follows that:

where α > −1, δm,n is the Kronecker delta, and uα, m is the m-th zero of Jα(x). This orthogonality relation can then be used to extract the coefficients in the Fourier–Bessel series, where a function is expanded in the basis of the functions Jα(x uα, m) for fixed α and varying m.

An analogous relationship for the spherical Bessel functions follows immediately:

If one defines a boxcar function of x that depends on a small parameter ε as:

which is zero everywhere except near 1. As ε approaches zero, the right-hand side approaches δ(x−1), where δ is the Dirac delta function. So by abuse of language (or "formally"), one says that

even though the integral on the left is not actually defined. A change of variables then yields the closure equation:[41]

for α > −1/2. The Hankel transform can express a fairly arbitrary function as an integral of Bessel functions of different scales. For the spherical Bessel functions the orthogonality relation is:

for α > −1. Again, this is a useful formal equation whose left-hand side is not actually defined.

Another important property of Bessel's equations, which follows from Abel's identity, involves the Wronskian of the solutions:

where Aα and Bα are any two solutions of Bessel's equation, and Cα is a constant independent of x (which depends on α and on the particular Bessel functions considered). In particular,

, has only real zeros. Let

be all its positive zeros, then

(There are a large number of other known integrals and identities that are not reproduced here, but which can be found in the references.)

where λ and ν may be taken as arbitrary complex numbers, see.[42][43] The above expression also holds if

. The analogous identities for modified Bessel functions are

Bessel himself originally proved that for non-negative integers n, the equation Jn(x) = 0 has an infinite number of solutions in x.[44] When the functions Jn(x) are plotted on the same graph, though, none of the zeros seem to coincide for different values of n except for the zero at x = 0. This phenomenon is known as Bourget's hypothesis after the nineteenth-century French mathematician who studied Bessel functions. Specifically it states that for any integers n ≥ 0 and m ≥ 1, the functions Jn(x) and Jn+m(x) have no common zeros other than the one at x = 0. The hypothesis was proved by Carl Ludwig Siegel in 1929.[45]