Not to be confused with Difference equation. 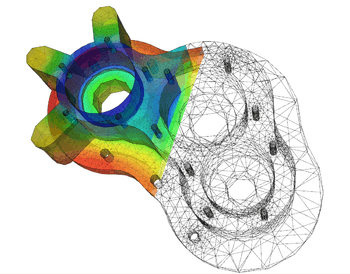 Visualization of heat transfer in a pump casing, created by solving the heat equation. Heat is being generated internally in the casing and being cooled at the boundary, providing a steady state temperature distribution.

A differential equation is a mathematical equation that relates some function with its derivatives. In applications, the functions usually represent physical quantities, the derivatives represent their rates of change, and the equation defines a relationship between the two. Because such relations are extremely common, differential equations play a prominent role in many disciplines including engineering, physics, economics, and biology.

If a self-contained formula for the solution is not available, the solution may be numerically approximated using computers. The theory of dynamical systems puts emphasis on qualitative analysis of systems described by differential equations, while many numerical methods have been developed to determine solutions with a given degree of accuracy.

He solves these examples and others using infinite series and discusses the non-uniqueness of solutions.

for which the following year Leibniz obtained solutions by simplifying it.[3]

The Euler–Lagrange equation was developed in the 1750s by Euler and Lagrange in connection with their studies of the tautochrone problem. This is the problem of determining a curve on which a weighted particle will fall to a fixed point in a fixed amount of time, independent of the starting point.

Lagrange solved this problem in 1755 and sent the solution to Euler. Both further developed Lagrange's method and applied it to mechanics, which led to the formulation of Lagrangian mechanics.

Fourier published his work on heat flow in Théorie analytique de la chaleur (The Analytic Theory of Heat),[9] in which he based his reasoning on Newton's law of cooling, namely, that the flow of heat between two adjacent molecules is proportional to the extremely small difference of their temperatures. Contained in this book was Fourier's proposal of his heat equation for conductive diffusion of heat. This partial differential equation is now taught to every student of mathematical physics.

For example, in classical mechanics, the motion of a body is described by its position and velocity as the time value varies. Newton's laws allow (given the position, velocity, acceleration and various forces acting on the body) one to express these variables dynamically as a differential equation for the unknown position of the body as a function of time.

In some cases, this differential equation (called an equation of motion) may be solved explicitly.

Gravity is considered constant, and air resistance may be modeled as proportional to the ball's velocity. This means that the ball's acceleration, which is a derivative of its velocity, depends on the velocity (and the velocity depends on time). Finding the velocity as a function of time involves solving a differential equation and verifying its validity.

Linear differential equations, which have solutions that can be added and multiplied by coefficients, are well-defined and understood, and exact closed-form solutions are obtained. By contrast, ODEs that lack additive solutions are nonlinear, and solving them is far more intricate, as one can rarely represent them by elementary functions in closed form: Instead, exact and analytic solutions of ODEs are in series or integral form. Graphical and numerical methods, applied by hand or by computer, may approximate solutions of ODEs and perhaps yield useful information, often sufficing in the absence of exact, analytic solutions.

A differential equation is linear if the unknown function and its derivatives have degree 1 (products of the unknown function and its derivatives are not allowed) and nonlinear otherwise. The characteristic property of linear equations is that their solutions form an affine subspace of an appropriate function space, which results in much more developed theory of linear differential equations.

Linear differential equations frequently appear as approximations to nonlinear equations. These approximations are only valid under restricted conditions. For example, the harmonic oscillator equation is an approximation to the nonlinear pendulum equation that is valid for small amplitude oscillations (see below).

In the first group of examples, let u be an unknown function of x, and c and ω are known constants. Note both ordinary and partial differential equations are broadly classified as linear and nonlinear.

In the next group of examples, the unknown function u depends on two variables x and t or x and y.

Solving differential equations is not like solving algebraic equations. Not only are their solutions oftentimes unclear, but whether solutions are unique or exist at all are also notable subjects of interest.

For first order initial value problems, the Peano existence theorem gives one set of circumstances in which a solution exists. Given any point

in the xy-plane, define some rectangular region

is in the interior of

. If we are given a differential equation

and the condition that

, then there is locally a solution to this problem if

are both continuous on

. This solution exists on some interval with its center at

. The solution may not be unique. (See Ordinary differential equation for other results.)

are continuous on some interval containing

Maxwell's equations are a set of partial differential equations that, together with the Lorentz force law, form the foundation of classical electrodynamics, classical optics, and electric circuits. These fields in turn underlie modern electrical and communications technologies. Maxwell's equations describe how electric and magnetic fields are generated and altered by each other and by charges and currents. They are named after the Scottish physicist and mathematician James Clerk Maxwell, who published an early form of those equations between 1861 and 1862.

The Einstein field equations (EFE; also known as "Einstein's equations") are a set of ten partial differential equations in Albert Einstein's general theory of relativity which describe the fundamental interaction of gravitation as a result of spacetime being curved by matter and energy.[14] First published by Einstein in 1915[15] as a tensor equation, the EFE equate local spacetime curvature (expressed by the Einstein tensor) with the local energy and momentum within that spacetime (expressed by the stress–energy tensor).[16]

In quantum mechanics, the analogue of Newton's law is Schrödinger's equation (a partial differential equation) for a quantum system (usually atoms, molecules, and subatomic particles whether free, bound, or localized). It is not a simple algebraic equation, but in general a linear partial differential equation, describing the time-evolution of the system's wave function (also called a "state function").[17]

The Lotka–Volterra equations, also known as the predator–prey equations, are a pair of first-order, non-linear, differential equations frequently used to describe the dynamics of biological systems in which two species interact, one as a predator and the other as prey.