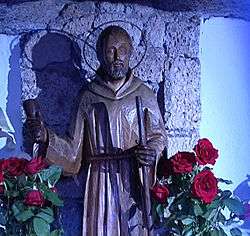 Peter of Saint Joseph Betancur, founder of the Order.

Bethlehemites, or Bethlemites, is a name that has many different meanings.

Its original significance was that of an inhabitant of Bethlehem in Judea. It is used in this sense to refer three times to David's father, Jesse, "Jesse the Bethlehemite", in the First Book of Samuel,[1] and is used also in the Second Book of Samuel with reference to another inhabitant of the same town.[2]

Members of a religious order

See also: Order of Our Lady of Bethlehem

Members of four Catholic religious orders have been known by that name. One of them has recently been restored to existence. The other two are extinct.

The author of an article in the 1907 Catholic Encyclopedia says that, in his Grande Chronique, Mathew Paris mentions that Henry III of England authorized an order of Bethlehemites to open a house in a suburb of Cambridge in 1257; but he leaves us in complete ignorance as to their founder, where they originated, and their history. We only know that their habit was similar to that of the Dominican order and that a red star, whose five rays emanated from an azure center (in reference to 2:1–11&src=ESV Matthew 2:1–11), decorated the breast of their cape. This was in commemoration of the star that appeared to the Magi and led them to Bethlehem. This order is not to be confused with the military order of the Crusaders of the Red Star (Ordo militaris crucigerorum cum rubea stella), who came from Palestine to Bohemia in 1217, where Blessed Agnes of Bohemia confided two hospitals to their charge. They have since remained in that country where they devote themselves to the care of the sick, to education, and to the various works of the ecclesiastical ministry.[3]

The author states that nothing further is known of this order, which he describes as a military order. He thus fails to indicate if it was connected with the Order of Our Lady of Bethlehem to which was entrusted in 1247, under the same king, the London hospital that later became known as Bedlam. This property had been donated to the Bishop of Bethlehem, and members of the new Order of Our Lady of Bethlehem, wore a star on their cloaks to symbolize their obeisance to the bishopric of Bethlehem.[4] This order was founded in the 13th century and its members were known as the Bethlehemites.[5]

On 18 January 1459, following the taking of Constantinople by the Turks (1453), Pope Pius II founded the knightly Order of Our Lady of Bethlehem for the defence of the island of Lemnos, which Cardinal Ludovico Trevisan, Patriarch of Aquileia, had recaptured from Mohammed II. The island was to be their headquarters, whence they were to oppose the attacks of the Moslems by way of the Aegean Sea and the Hellespont. The order was composed of brother-knights and priests governed by an elective grand-master. The white costume worn by the members was decorated with a red cross and the rule prescribed for them was very similar to that of the Knights of St. John of Jerusalem.[3][6]

That their needs might be supplied, the pope turned over to them the property and revenues of the order of St. Lazarus, the order of Sainte-Marie du Château des Bretons, the order of Bologna, the order of the Holy Sepulchre, the order of Santo Spirito in Sassia, the order of St. Mary of the Crossed Friars, and the order of St. James of Lucca, suppressing all these orders for this purpose. He alluded in a bull to this foundation and the bravery of its knights, but the second capture of Lemnos by the Turks rendered the institution useless. Thus the order of Our Lady of Bethlehem was suppressed almost as soon as founded and those orders whose goods the pope had transmitted to it were re-established.[3][6] 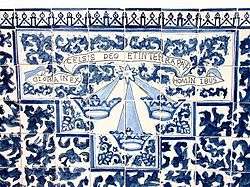 Symbol of the Order of the Bethlehem Brothers

The Order of Bethlehemite Brothers (or Bethlehem Brothers) are a religious institute founded in Guatemala in 1653 and restored in 1984. It was the first to be founded in the Americas, and the last religious order with solemn vows to be approved anywhere by the Church before the changes introduced by the 1917 Code of Canon Law.[7] Were founded by Pedro de Betancourt, from the Canarian.

In 2007, the order had 17 members, living in a single community at La Laguna, in Tenerife, Canary Islands.[8]

Main article: Monastic Family of Bethlehem, of the Assumption of the Virgin and of Saint Bruno 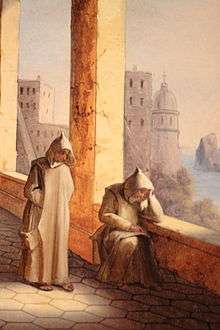 The Monks and Sisters of Bethlehem wear the same religious habit as the Order of Saint Bruno members.

The Monastic Family of Bethlehem, of the Assumption of the Virgin and of Saint Bruno (or simply Monks and Sisters of Bethlehem) is a Roman Catholic religious order with Carthusian spirituality founded on November 1, 1950, at Saint Peter's Square, Rome, following the promulgation of the dogma of the Assumption of the Blessed Virgin Mary into Heaven, by the inspiration of a small group of French pilgrims.[10] The Monastic Sisters were founded in France, soon after, and the Monastic Brothers in 1976.

Inmates of the Bedlam hospital or madmen in general

In 1247, a property in London donated to the bishopric of Bethlehem was entrusted to a new Order of Our Lady of Bethlehem. Under Edward III (1327–77), the institution thus set up passed into the hands of the English Crown, and became known as the Bethlem Royal Hospital. It is Europe's oldest psychiatric hospital, and the word "Bethlemite" used for its inmates came to be used generically for a madman.[11] 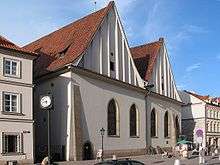 The name "Bethlehemites" has sometimes been given to the Hussites of Bohemia, because their leader, Jan Hus preached in the Bethlehem Chapel in Prague.[12]