Map which shows Judea (south of Samaria and the Galilee)

Judea or Judæa (/dʒuːˈdiː.ə/;[1] from Hebrew: יהודה‎‎, Standard Yəhuda Tiberian Yəhûḏāh, Greek: Ἰουδαία, Ioudaía; Latin: IVDÆA, Arabic: يهودا‎‎, Yahudia) is the ancient biblical, Roman, and modern name of the mountainous southern part of Palestine. The name originates from the Hebrew, Canaanite and later neo-Babylonian and Persian name "Yehudah" or "Yehud" for the biblical Israelite tribe of Judah (Yehudah) and associated Kingdom of Judah, which the 1906 Jewish Encyclopedia dates from 934 until 586 BCE.[2] The name of the region continued to be incorporated through the Babylonian conquest, Persian, Hellenistic, and Roman periods as Yehud, Yehud Medinata, Hasmonean Judea, and consequently Herodian Judea and Roman Judea, respectively.

As a consequence of the Bar Kokhba revolt, in 135 CE the region was renamed and merged with Roman Syria to form Syria Palaestina by the victorious Roman Emperor Hadrian. A large part of Judea was included in Jordanian West Bank between 1948 and 1967 (i.e., the "West Bank" of the Kingdom of Jordan).[3][4] The term Judea as a geographical term was revived by the Israeli government in the 20th century as part of the Israeli administrative district name Judea and Samaria Area for the territory generally referred to as the West Bank.[5]

The name Judea is a Greek and Roman adaptation of the name "Judah", which originally encompassed the territory of the Israelite tribe of that name and later of the ancient Kingdom of Judah. Nimrud Tablet K.3751, dated c.733 BCE, is the earliest known record of the name Judah (written in Assyrian cuneiform as Yaudaya or KUR.ia-ú-da-a-a).

Judea was sometimes used as the name for the entire region, including parts beyond the river Jordan.[6] In 200 CE Sextus Julius Africanus, cited by Eusebius (Church History 1.7.14), described "Nazara" (Nazareth) as a village in Judea.[7]

"Judea" was the name used by English-speakers until the Jordanian occupation of the area in 1948. Jordan called the area ad-difa’a al-gharbiya (translated into English as the "West Bank").[8] "Yehuda" is the Hebrew term used for the area in modern Israel since the region was captured and occupied by Israel in 1967.[9] 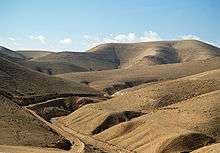 In the limits of Samaria and Judea lies the village Anuath, which is also named Borceos. This is the northern boundary of Judea. The southern parts of Judea, if they be measured lengthways, are bounded by a village adjoining to the confines of Arabia; the Jews that dwell there call it Jordan. However, its breadth is extended from the river Jordan to Joppa. The city Jerusalem is situated in the very middle; on which account some have, with sagacity enough, called that city the Navel of the country. Nor indeed is Judea destitute of such delights as come from the sea, since its maritime places extend as far as Ptolemais: it was parted into eleven portions, of which the royal city Jerusalem was the supreme, and presided over all the neighboring country, as the head does over the body. As to the other cities that were inferior to it, they presided over their several toparchies; Gophna was the second of those cities, and next to that Acrabatta, after them Thamna, and Lydda, and Emmaus, and Pella, and Idumea, and Engaddi, and Herodium, and Jericho; and after them came Jamnia and Joppa, as presiding over the neighboring people; and besides these there was the region of Gamala, and Gaulonitis, and Batanea, and Trachonitis, which are also parts of the kingdom of Agrippa. This [last] country begins at Mount Libanus, and the fountains of Jordan, and reaches breadthways to the lake of Tiberias; and in length is extended from a village called Arpha, as far as Julias. Its inhabitants are a mixture of Jews and Syrians. And thus have I, with all possible brevity, described the country of Judea, and those that lie round about it.[10] 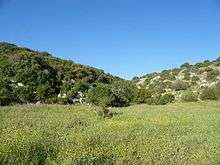 Mediterranean oak and terebinth woodland in the Valley of Elah, southwestern Judea.

Judea is a mountainous region, part of which is considered a desert. It varies greatly in height, rising to an altitude of 1,020 m (3,346 ft) in the south at Mount Hebron, 30 km (19 mi) southwest of Jerusalem, and descending to as much as 400 m (1,312 ft) below sea level in the east of the region. It also varies in rainfall, starting with about 400–500 millimetres (16–20 in) in the western hills, rising to 600 millimetres (24 in) around western Jerusalem (in central Judea), falling back to 400 millimetres (16 in) in eastern Jerusalem and dropping to around 100 mm in the eastern parts, due to a rainshadow effect (this is the Judean desert). The climate, accordingly, moves between Mediterranean in the west and desert climate in the east, with a strip of steppe climate in the middle. Major urban areas in the region include Jerusalem, Bethlehem, Gush Etzion, Jericho and Hebron.[11]

Geographers divide Judea into several regions: the Hebron hills, the Jerusalem saddle, the Bethel hills and the Judean desert east of Jerusalem, which descends in a series of steps to the Dead Sea. The hills are distinct for their anticline structure. In ancient times the hills were forested, and the Bible records agriculture and sheep farming being practiced in the area. Animals are still grazed today, with shepherds moving them between the low ground to the hilltops as summer approaches, while the slopes are still layered with centuries-old stone terracing. The Jewish Revolt against the Romans ended in the devastation of vast areas of the Judaean countryside.[12]

Main articles: History of ancient Israel and Judah and Kingdom of Judah 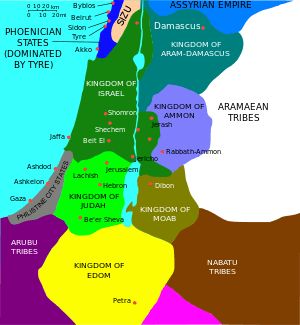 Map of the southern Levant, c.830s BCE.
Kingdom of Judah

The early history of Judah is uncertain; the Biblical account states that the Kingdom of Judah, along with the Northern Kingdom, was a successor to a united Kingdom of Israel, but modern scholarship generally holds that the united monarchy is ahistorical.[13][14][15][16] Regardless, the Northern Kingdom was conquered into the Neo-Assyrian Empire in 720 BCE. The Kingdom of Judah remained nominally independent, but paid tribute to the Assyrian Empire from 715 and throughout the first half of the 7th century BCE, regaining its independence as the Assyrian Empire declined after 640 BCE, but after 609 again fell under the sway of imperial rule, this time paying tribute at first to the Egyptians and after 601 BCE to the Neo-Babylonian Empire, until 586 BCE, when it was finally conquered by Babylonia.

Judea is central to much of the narrative of the Torah, with the Patriarchs Abraham, Isaac and Jacob said to have been buried at Hebron in the Tomb of the Patriarchs. 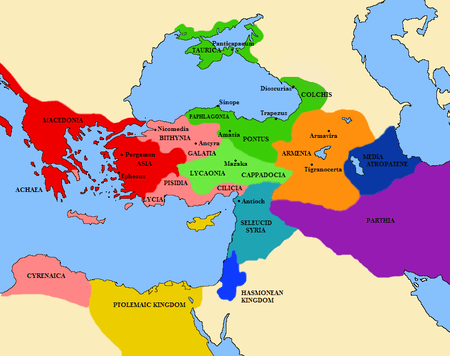 The Babylonian Empire fell to the conquests of Cyrus the Great in 539 BCE.[17] Judea remained under Persian rule until the conquest of Alexander the Great in 332 BCE, eventually falling under the rule of the Hellenistic Seleucid Empire until the revolt of Judas Maccabeus resulted in the Hasmonean dynasty of Kings who ruled in Judea for over a century.[18]

Judea lost its independence to the Romans in the 1st century BCE, by becoming first a tributary kingdom, then a province, of the Roman Empire. The Romans had allied themselves to the Maccabees and interfered again in 63 BCE, at the end of the Third Mithridatic War, when the proconsul Pompeius Magnus ("Pompey the Great") stayed behind to make the area secure for Rome, including his siege of Jerusalem in 63 BCE. Queen Alexandra Salome had recently died, and a civil war broke out between her sons, Hyrcanus II and Aristobulus II. Pompeius restored Hyrcanus but political rule passed to the Herodian family who ruled as client kings. In 6 CE, Judea came under direct Roman rule as the southern part of the province of Iudaea, although Jews living in the province still maintained some form of independence and could judge offenders by their own laws, including capital offences, until circa 28 CE.[19] The Province of Judea, during the late Second Temple period was also divided into five conclaves, or administrative districts: 1) Jerusalem (ירושלם), 2) Gadara (גדרה), 3) Amathus (עמתו), 4) Jericho (יריחו), 5) Sepphoris (צפורין).[20] Eventually, the Jewish population rose against Roman rule in 66 CE in a revolt that was unsuccessful. Jerusalem was besieged in 70 CE and much of the population was killed or enslaved.[21]

Again 70 years later, the Jewish population revolted under the leadership of Simon bar Kokhba and established the last Kingdom of Israel, which lasted three years, before the Romans managed to conquer the province for good, at a high cost in terms of manpower and expense.

After the defeat of Bar Kokhba (132–135 CE) the Roman Emperor Hadrian was determined to wipe out the identity of Israel-Judah-Judea, and renamed it Syria Palaestina. Until that time the area had been called "province of Judea" (Roman Judea) by the Romans.[22] At the same time, he changed the name of the city of Jerusalem to Aelia Capitolina. The Romans killed many Jews and sold many more into slavery; many Jews departed into the Jewish diaspora, but there was never a complete Jewish abandonment of the area, and Jews have been an important (and sometimes persecuted) minority in Judea since that time.[23] 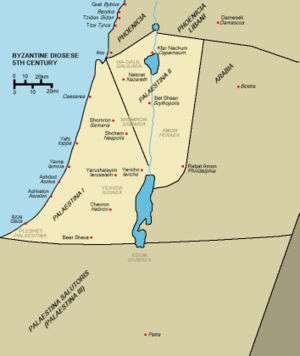 The Byzantines redrew the borders of the Land of Palestine. The various Roman provinces (Syria Palaestina, Samaria, Galilee, and Peraea) were reorganized into three diocese of Palaestina, reverting to the name first used by Greek historian Herodotus in the mid-5th century BCE: Palaestina Prima, Secunda, and Tertia or Salutaris (First, Second, and Third Palestine), part of the Diocese of the East.[24][25] Palaestina Prima consisted of Judea, Samaria, the Paralia, and Peraea with the governor residing in Caesarea. Palaestina Secunda consisted of the Galilee, the lower Jezreel Valley, the regions east of Galilee, and the western part of the former Decapolis with the seat of government at Scythopolis. Palaestina Tertia included the Negev, southern Jordan—once part of Arabia—and most of Sinai with Petra as the usual residence of the governor. Palestina Tertia was also known as Palaestina Salutaris.[24][26] According to historian H.H. Ben-Sasson,[27] this reorganisation took place under Diocletian (284–305), although other scholars suggest this change occurred later in 390.