St Canice's Cathedral, Kilkenny, the episcopal seat of the pre-Reformation and Church of Ireland bishops. 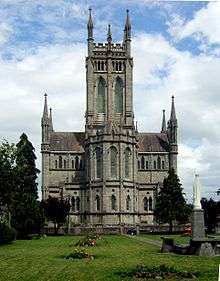 The Bishop of Ossory (Irish: Easpag Osraí) is an episcopal title which takes its name after the ancient of Kingdom of Ossory in the Province of Leinster, Ireland. In the Roman Catholic Church it remains a separate title, but in the Church of Ireland it has been united with other bishoprics.

The diocese of Ossory was one the twenty-four dioceses established at the Synod of Rathbreasail in 1111 and coincided with the ancient Kingdom of Ossory. The Episcopal see was originally at Aghaboe but was subsequently transferred to St Canice's Cathedral, Kilkenny, in 1120s.[1]

In the Roman Catholic Church, the title continues as a separate bishopric. The bishop's seat (cathedra) is located at St. Mary's Cathedral, Kilkenny. The Ordinary is the Most Reverend Séamus Freeman, who was appointed by the Holy See on 14 September 2007 and ordained bishop on 2 December 2007.

Catholic Bishops during the Reformation