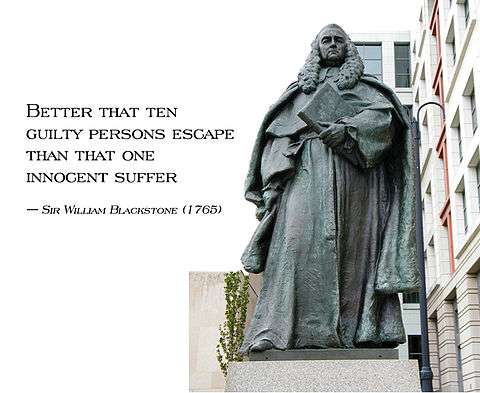 "It is better that ten guilty persons escape than that one innocent suffer",

...as expressed by the English jurist William Blackstone in his seminal work, Commentaries on the Laws of England, published in the 1760s.

Historically, the details of the ratio have varied, but the message that government and the courts must err on the side of innocence has remained constant.

Historic expressions of the principle

The principle is much older than Blackstone's formulation, being closely tied to the presumption of innocence in criminal trials. An early example of the principle appears in the Bible (Genesis 18:23-32),[1][2] as:

This was about the destruction of Sodom which, the Bible claims, God did destroy after rescuing most of Lot's family.

27 Early the next morning Abraham got up and returned to the place where he had stood before the Lord. 28 He looked down toward Sodom and Gomorrah, toward all the land of the plain, and he saw dense smoke rising from the land, like smoke from a furnace.[5]

29 So when God destroyed the cities of the plain, he remembered Abraham, and he brought Lot out of the catastrophe that overthrew the cities where Lot had lived.[6]

Another example in the Islamic tradition, as compiled in the tome [Jami'] of at-Tirmidhi, quotes Muhammad as saying, "Avoid legal punishments as far as possible, and if there are any doubts in the case then use them, for it is better for a judge to err towards leniency than towards punishment". Another similar expression reads, "Invoke doubtfulness in evidence during prosecution to avoid legal punishments". [7]

The 12th-century legal theorist Maimonides, expounding on this passage as well as Exodus 23:7 ("the innocent and righteous slay thou not") argued that executing an accused criminal on anything less than absolute certainty would progressively lead to convictions merely "according to the judge's caprice. Hence the Exalted One has shut this door" against the use of presumptive evidence, for "it is better and more satisfactory to acquit a thousand guilty persons than to put a single innocent one to death."[1][8][9]

Sir John Fortescue's De Laudibus Legum Angliae (c. 1470) states that "one would much rather that twenty guilty persons should escape the punishment of death, than that one innocent person should be condemned and suffer capitally."

Similarly, on 3 October 1692, while decrying the Salem witch trials, Increase Mather adapted Fortescue's statement and wrote, "It were better that Ten Suspected Witches should escape, than that one Innocent Person should be Condemned."[10]

While compiling his highly influential set of books on English common law, William Blackstone expressed the famous ratio this way:

This variation was absorbed by the British legal system, becoming a maxim by the early 19th century.[12] It was also absorbed into American common law, cited repeatedly by that country's Founding Fathers, later becoming a standard drilled into law students all the way into the 21st century.[13] 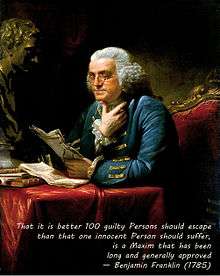 Other commentators have echoed the principle; Benjamin Franklin stated it as, "it is better 100 guilty Persons should escape than that one innocent Person should suffer".[14]

Defending British soldiers charged with murder for their role in the Boston Massacre, John Adams also expanded upon the rationale behind Blackstone's Formulation when he stated:

Authoritarian personalities tend to take the opposite view; Bismarck is believed to have stated that "it is better that ten innocent men suffer than one guilty man escape."[1] Pol Pot[15] made similar remarks. Wolfgang Schäuble[16] referenced this principle while saying that it is not applicable to the context of preventing terrorist attacks. Former American Vice President Dick Cheney said that his support of American use of "enhanced interrogation techniques" (torture) against suspected terrorists was unchanged by the fact that 25% of CIA detainees subject to that treatment were later proven to be innocent, including one who died of hypothermia in CIA custody. "I'm more concerned with bad guys who got out and released than I am with a few that in fact were innocent." Asked whether the 25% margin was too high, Cheney responded, "I have no problem as long as we achieve our objective. . . . I'd do it again in a minute."[17]

Liberal columnist Ezra Klein supported California's SB 967 "Affirmative Consent" law with the same reasoning as Cheney's supported "enhanced interrogation techniques". While claiming the law was "terrible" and could be used to punish people who did not commit rape, Klein states "its overreach is precisely its value" and "ugly problems don't always have pretty solutions." [18]

Alexander Volokh cites an apparent questioning of the principle, with the tale of a Chinese professor who responds, "Better for whom?"[1]

Horace Rumpole, the protagonist barrister of Rumpole of the Bailey, is fond of paraphrasing Blackstone's formulation, albeit without attribution.