This article is about the second book of the Torah and of the Old Testament. For the events related in that book, see The Exodus. For other uses, see Exodus (disambiguation).

The Book of Exodus or, simply, Exodus (from Ancient Greek: ἔξοδος, éxodos, meaning "going out"; Hebrew: שְׁמוֹת‎, Shəmōṯ, "Names", the second word of the beginning of the text: "These are the names of the sons of Israel" Hebrew: ואלה שמות בני ישראל‎), is the second book of the Torah and the Hebrew Bible (the Old Testament).[1]

The book tells how the Israelites leave slavery in Egypt through the strength of Yahweh, the God who has chosen Israel as his people. Led by their prophet Moses they journey through the wilderness to Mount Sinai, where Yahweh promises them the land of Canaan (the "Promised Land") in return for their faithfulness. Israel enters into a covenant with Yahweh who gives them their laws and instructions to build the Tabernacle, the means by which he will come here from heaven and dwell with them and lead them in a holy war to possess the land, and then give them peace.

Traditionally ascribed to Moses himself, modern scholarship sees the book as initially a product of the Babylonian exile (6th century BCE), based on earlier written and oral traditions, with final revisions in the Persian post-exilic period (5th century BCE).[2][3] Carol Meyers in her commentary on Exodus suggests that it is arguably the most important book in the Bible, as it presents the defining features of Israel's identity: memories of a past marked by hardship and escape, a binding covenant with God, who chooses Israel, and the establishment of the life of the community and the guidelines for sustaining it.[4]

There is no unanimous agreement among scholars on the structure of Exodus. One strong possibility is that it is a diptych (i.e., divided into two parts), with the division between parts 1 and 2 at the crossing of the Red Sea or at the beginning of the theophany (appearance of God) in chapter 19.[5] On this plan, the first part tells of God's rescue of his people from Egypt and their journey under his care to Sinai (chapters 1–19) and the second tells of the covenant between them (chapters 20–40).[6]

Egypt's Pharaoh, fearful of the Israelites' numbers, orders that all newborn boys be thrown into the Nile. A Levite woman (identified elsewhere as Jochebed) saves her baby by setting him adrift on the river Nile in an ark of bulrushes. The Pharaoh's daughter finds the child, names him Moses, and brings him up as her own. But Moses is aware of his origins, and one day, when grown, he kills an Egyptian overseer who is beating a Hebrew slave and has to flee into Midian. There he marries Zipporah, the daughter of Midianite priest Jethro, and encounters God in a burning bush. Moses asks God for his name: God replies: "I AM that I AM." God tells Moses to return to Egypt and lead the Hebrews into Canaan, the land promised to Abraham.

Moses returns to Egypt and fails to convince the Pharaoh to release the Israelites. God smites the Egyptians with 10 terrible plagues (Plagues of Egypt) including a river of blood, many frogs, and the death of first-born sons. Moses leads the Israelites out of bondage after a final chase when the Pharaoh reneges on his coerced consent (Crossing the Red Sea). The desert proves arduous, and the Israelites complain and long for Egypt, but God provides manna and miraculous water for them. The Israelites arrive at the mountain of God, where Moses' father-in-law Jethro visits Moses; at his suggestion Moses appoints judges over Israel. God asks whether they will agree to be his people. They accept. The people gather at the foot of the mountain, and with thunder and lightning, fire and clouds of smoke, and the sound of trumpets, and the trembling of the mountain, God appears on the peak, and the people see the cloud and hear the voice [or possibly "sound"] of God. Moses is told to ascend the mountain. God pronounces the Ten Commandments (the Ethical Decalogue) in the hearing of all Israel. Moses goes up the mountain into the presence of God, who pronounces the Covenant Code (a detailed code of ritual and civil law), and promises Canaan to them if they obey. Moses comes down the mountain and writes down God's words and the people agree to keep them. God calls Moses up the mountain where he remains for 40 days and 40 nights. At the conclusion of the 40 days and 40 nights, Moses returns holding the set of stone tablets.

God gives Moses instructions for the construction of the tabernacle so that God could dwell permanently among his chosen people, as well as instructions for the priestly vestments, the altar and its appurtenances, the procedure to be used to ordain the priests, and the daily sacrifices to be offered. Aaron is appointed as the first hereditary high priest. God gives Moses the two tablets of stone containing the words of the ten commandments, written with the "finger of God".[7]

While Moses is with God, Aaron makes a golden calf, which the people worship. God informs Moses of their apostasy and threatens to kill them all, but relents when Moses pleads for them. Moses comes down from the mountain, smashes the stone tablets in anger, and commands the Levites to massacre the unfaithful Israelites. God commands Moses to make two new tablets on which He will personally write the words that were on the first tablets. Moses ascends the mountain, God dictates the Ten Commandments (the Ritual Decalogue), and Moses writes them on the tablets.

Moses descends from the mountain, and his face is transformed, so that from that time onwards he has to hide his face with a veil. Moses assembles the Hebrews and repeats to them the commandments he has received from God, which are to keep the Sabbath and to construct the Tabernacle. "And all the construction of the Tabernacle of the Tent of Meeting was finished, and the children of Israel did according to everything that God had commanded Moses", and from that time God dwelt in the Tabernacle and ordered the travels of the Hebrews. Moses with the Ten Commandments, by Rembrandt (1659)

Jewish and Christian tradition viewed Moses as the author of Exodus and the entire Pentateuch, but by the end of the 19th century the increasing awareness of discrepancies, inconsistencies, repetitions and other features of the Pentateuch had led scholars to abandon this idea.[8] In approximate round dates, the process which produced Exodus and the Pentateuch probably began around 600 BCE when existing oral and written traditions were brought together to form books recognisable as those we know, reaching their final form as unchangeable sacred texts around 400 BCE. It is clear that the main outlines of the narrative were certainly known long before the seventh century BCE, in the allusions to the Exodus and the wandering in the wilderness contained in the oracles of the prophets Amos and Hosea a full century before.[3][9]

The story of the exodus is the founding myth of Israel, telling how the Israelites were delivered from slavery by Yahweh and therefore belong to him through the Mosaic covenant.[10] The Book of Exodus is not a historical narrative in any modern sense:[11] modern history writing requires the critical evaluation of sources, and does not accept God as a cause of events,[12] but in Exodus, everything is presented as the work of God, who appears frequently in person, and the historical setting is only very hazily sketched.[13] The purpose of the book is not to record what really happened, but to reflect the historical experience of the exile community in Babylon and later Jerusalem, facing foreign captivity and the need to come to terms with their understanding of God.[14]

Although mythical elements are not so prominent in Exodus as in Genesis, ancient legends have an influence on the book's content: for example, the story of the infant Moses's salvation from the Nile is based on an earlier legend of king Sargon of Akkad, while the story of the parting of the Red Sea trades on Mesopotamian creation mythology. Similarly, the Covenant Code (the law code in Exodus 20:22–23:33) has some similarities in both content and structure with the Laws of Hammurabi. These influences serve to reinforce the conclusion that the Book of Exodus originated in the exiled Jewish community of 6th-century BCE Babylon, but not all the sources are Mesopotamian: the story of Moses's flight to Midian following the murder of the Egyptian overseer may draw on the Egyptian Story of Sinuhe.[15] 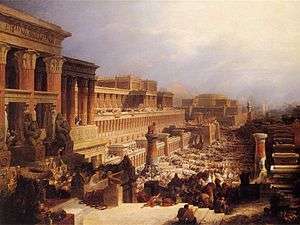 "Departure of the Israelites", by David Roberts, 1829

Biblical scholars describe the Bible's theologically-motivated history writing as "salvation history", meaning a history of God's saving actions that give identity to Israel – the promise of offspring and land to the ancestors, the exodus from Egypt (in which God saves Israel from slavery), the wilderness wandering, the revelation at Sinai, and the hope for the future life in the promised land.[12]

A theophany is a manifestation (appearance) of a god – in the Bible, an appearance of the God of Israel, accompanied by storms – the earth trembles, the mountains quake, the heavens pour rain, thunder peals and lightning flashes.[16] The theophany in Exodus begins "the third day" from their arrival at Sinai in chapter 19: Yahweh and the people meet at the mountain, God appears in the storm and converses with Moses, giving him the Ten Commandments while the people listen. The theophany is therefore a public experience of divine law.[17]

The second half of Exodus marks the point at which, and describes the process through which, God's theophany becomes a permanent presence for Israel via the Tabernacle. That so much of the book (chapters 25–31, 35–40) is spent describing the plans of the Tabernacle demonstrates the importance it played in the perception of Second Temple Judaism at the time of the text's redaction by the Priestly writers: the Tabernacle is the place where God is physically present, where, through the priesthood, Israel could be in direct, literal communion with him.[18]

The heart of Exodus is the Sinaitic covenant.[19] A covenant is a legal document binding two parties to take on certain obligations towards each other.[20] There are several covenants in the Bible, and in each case they exhibit at least some of the elements found in real-life treaties of the ancient Middle East: a preamble, historical prologue, stipulations, deposition and reading, list of witnesses, blessings and curses, and ratification by animal sacrifice.[21] Biblical covenants, in contrast to Eastern covenants in general, are between a god, Yahweh, and a people, Israel, instead of between a strong ruler and a weaker vassal.[22]

Israel is elected for salvation because the "sons of Israel" are "the firstborn son" of the God of Israel, descended through Shem and Abraham to the chosen line of Jacob whose name is changed to Israel. The goal of the divine plan as revealed in Exodus is a return to humanity's state in Eden, so that God can dwell with the Israelites as he had with Adam and Eve through the Ark and Tabernacle, which together form a model of the universe; in later Abrahamic religions this came to be interpreted as Israel being the guardian of God's plan for humanity, to bring "God's creation blessing to mankind" begun in Adam.[23] 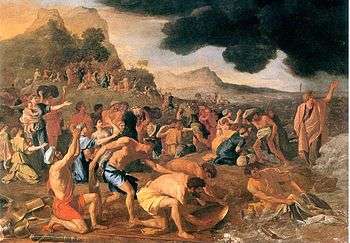