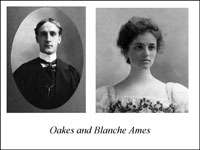 Born Blanche Ames in Lowell, Massachusetts, Ames was the daughter of Civil War General and Mississippi Governor Adelbert Ames and Blanche Butler Ames.[1] The fourth of six children, she was the sister of Adelbert Ames Jr., a prominent scientist. She was also granddaughter to actress Sarah Hildreth Butler.[2]

Ames attended the Rogers Hall School in Lowell.[3] She was later one of few women of her time to attend college,[4] earning a B.A. in Art History and a diploma in Studio Art from Smith College in 1899.[3][5] She was the president of her graduating class.[4]

In 1900 she married Harvard University botany professor Oakes Ames (no relation) and took the married name Blanche Ames Ames. The Ameses had four children: Pauline (born 1901), Oliver (born 1903), Amyas (born 1906), and Evelyn (born 1910).[6] Pauline grew up to write many books about her family, including "Oakes Ames, Jottings of a Harvard Botanist" (1979), and "The Plimpton Papers, Law and Diplomacy" (1985).[7] One of Ames' grandchildren was George Ames Plimpton, famed sportswriter.[3] The Ames estate in North Easton, Massachusetts, called Borderland, was designed by Ames herself in the early 1900s.[8] It is now Borderland State Park.

Ames was a talented artist in a variety of media. Her work included portraiture, primarily done in oil paint, botanical illustration, and political cartoons.[9]

Though introduced to art through her mother Blanche Ames’s lifelong interest in painting, Blanche Ames Ames first became seriously interested in practicing art as a college student. Praised by her professors and fellow classmates, she began to envision her life as an artist. Through her persistence, and with the encouragement her husband Oakes (who gifted her with an extravagant set of books on famous artists while courting her) this vision became reality.[2]

Beyond the knowledge of art history she gained at Smith, Ames was well aware of artists of her own time. In Boston, she sat for a portrait by prominent American Impressionist Edmund C. Tarbell in 1906.[5] She attended the armory show of modern art in New York City in 1913.[2] Though not a part of the circle of women producing suffrage cartoons in New York, who were connected through Heterodoxy and other organizations, she kept close watch on their work and other efforts toward suffrage in both England and America, hiring a newspaper clipping service to save suffrage news from 1915 to 1916.[2][10]

In 1902, she began illustrating Oakes Ames's botanical publications, including his seven volume treatise on orchids, which is still considered one of the best researched to this day.[5][9] Previously he had illustrated the orchids himself with watercolor. Blanche Ames Ames first used watercolors for the orchid illustrations, but later switched to copperplate etching.[5] She also published detailed pen and ink drawings of the orchids.[5] The illustrations were drawn from dried plant specimens observed through a camera lucida.[11] Blanche Ames Ames continued to illustrate orchids throughout their life together, eventually designing the decorations which now appear at both of their graves.[2]

During the 1910s Blanch Ames Ames produced a number of political cartoons promoting women’s suffrage, which appeared in publications including Woman’s Journal, and the Boston American. In 1915 she became the art editor of Woman’s Journal, which had relocated its headquarters from New York to nearby Boston three years prior.[10]

Ames's etchings are on display at the Metropolitan Museum of Art, and her oil painting can be seen at Harvard, Dartmouth, and Columbia University.[9]

Ames held a lifelong passion for women's rights. In 1915, when Massachusetts voters would decide whether to allow women the right to vote, Blanche attended 40 events throughout the commonwealth to spread the word of female equality.[12] She was president of the Easton Woman Suffrage League and from 1915 to 1918 she was Treasurer of the Massachusetts Woman Suffrage League.[3] In 1916 she helped found the Birth Control League of Massachusetts, an affiliate of Margaret Sanger's group, the American Birth Control League, and served as first President.[3][4] In this role Ames helped to form The Doctors Bill to Clarify the Law, which regulated the ability of doctors to provide birth control counseling to married women with health problems, and later helped establish universal access to birth control.[13] Massachusetts did not legalize contraception for married women until 1966, the last state in the nation to do so, and Ames set the standard for perseverance in the decades-long effort.[14]

In 1941 Ames also served as a board member and later as President of the New England Hospital for Women and Children in Boston.[3] NEH was managed by women serving purposely only women and children. They intended to give medical care services to the same sex . In 1952 because of financial circumstances they opened up to the possibility of employing male staff. Ames fought to keep the hospital as only female staff and administration through funding methods.[15]

Ames held patents for inventions which included a hexagonal lumber cutter and a method for entrapping enemy aircraft.[9]

During World War II, Ames came across the realization that thread could snarl and jam a sewing machine motor, Blanche then used that same principle to design a device to ensnare low-flying aircraft. The machine was demonstrated on the lawn at Borderland for guests from the Pentagon. Although it was accepted by the U.S. Army, it came too late for it to be applied in war.[16]

In the early 1910s Ames' brother, Adelbert Ames, Jr., a scientist particularly interested in vision, moved into her studio for painting lessons.[5] With her brother Ames began to develop a color notation system more extensive than the Munsell color system.[5] Together the two created coded color swatches which corresponded to particular tubes of paint. The artist would use these swatches to select the most realistic colors and the codes would be mapped out on a drawing before the paint was applied.[5] Blanche Ames Ames first put this system to use in a painting in 1912. She continued to use this color notation after her collaboration with her brother had concluded.[5]