For other uses, see Bluestocking (disambiguation). 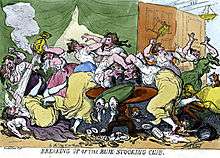 Caricature of blue stockings by Rowlandson

Until the late 18th century, the term had referred to learned people of both sexes.[2] It subsequently was applied primarily to intellectual women, and the French equivalent bas bleu had a similar connotation.[3] The term later developed negative implications, and in some instances such women were stereotyped as being "frumpy". The reference to blue stockings may arise from the time when woollen worsted stockings were informal dress, in contrast to formal, fashionable black silk stockings. Curiously, the most frequent such reference is to a man, Benjamin Stillingfleet, who reportedly lacked the formal black stockings, yet still participated in the Blue Stockings Society.[4][5]

John Amos Comenius referred to bluestockings in 1638, deploring how women had been excluded from higher education in ancient times.[6] The name may also have been applied in the 15th century to the blue stockings worn by the members of the Compagnie della Calza in Venice, which then was adopted in Paris and London; and in the 17th century to the Covenanters in Scotland, who wore unbleached woollen stockings, in contrast to the bleached or dyed stockings of the more affluent.

The Blue Stockings Society was a literary society led by Elizabeth Montagu and others in the 1750s in England. Elizabeth Montagu was an anomaly in this society because she took possession of her husband's property when he died. This allowed her to have impact in her world.[7] This society was originally founded by women, and included many prominent members of English society, both male and female, including Harriet Bowdler, Edmund Burke, Sarah Fielding, Samuel Johnson, and Frances Pulteney.[8] M.P., an 1811 comic opera by Thomas Moore and Charles Edward Horn, was subtitled The Blue Stocking. It contained a character Lady Bab Blue who was a parody of bluestockings.

William Hazlitt said, "The bluestocking is the most odious character in society...she sinks wherever she is placed, like the yolk of an egg, to the bottom, and carries the filth with her."[9]

"The Bluestocking" is the name of the yearbook of Mary Baldwin College, a traditionally all-women's school in Staunton, Virginia.

In Japan, a literary magazine Seitō (Bluestocking) was launched in 1911 under the leadership of Raichō Hiratsuka. It ran until 1916, providing a creative outlet and political platform for Japanese feminists even while it faced public outcry and government censorship. [10]