This audio file was created from a revision of the "Bobsleigh" article dated 2006-02-04, and does not reflect subsequent edits to the article. (Audio help)
More spoken articles

Bobsleigh or bobsled is a winter sport in which teams of two or four teammates make timed runs down narrow, twisting, banked, iced tracks in a gravity-powered sled. The timed runs are combined to calculate the final score.

The various types of sleds came several years before the first tracks were built in St. Moritz, Switzerland, where the original bobsleds were adapted upsized luge/skeleton sleds designed by the adventurously wealthy to carry passengers. All three types were adapted from boys' delivery sleds and toboggans.

Competition naturally followed, and to protect the working class and rich visitors in the streets and byways of St Moritz, bobsledding was eventually banned from the public highway. In the winter of 1903/1904 the Badrutt family, owners of the historic Kulm Hotel and the Palace Hotel, allowed Emil Thoma to organise the construction of the first familiarly configured 'half-pipe' track in the Kulm Hotel Park, ending in the village of Cresta. It has hosted the sport during two Olympics and is still in use today. 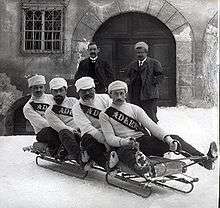 Although sledding on snow or ice had been popular in many northern countries ( such as Arctic ), bobsleighing as a modern sport originated relatively recently. It developed from two crestas (skeleton sleds) attached together with a board and with a steering mechanism attached to the front cresta. The sport had humble beginnings, starting when the successful marketing of hotelier Caspar Badrutt (1848–1904) enticed English tourists were to stay over the winter in the mineral spa town of St. Moritz, Switzerland. Badrutt, annoyed with the limitations of a season of a mere four months for the rooms, food, alcohol and activities he provided, successfully "sold" the idea of "winter resorting" to some of his English regulars. In the 1870s some of his more adventurous English guests began adapting boys' delivery sleds for recreation and began colliding with pedestrians while speeding down the village's lanes, alleys and roads.

The name of the sport appeared when competitors adopted the technique of bobbing back and forth inside the sled to increase its speed.[1]

This had both short- and long-term outcomes: in the short term the guests began to scheme about and invent "steering means" for the sleds, which became the luge, bobsleighs (bobsleds), and head-first skeleton. Long term, after a couple of more years of happy pedestrian peril, Badrutt built a special track for their activities—the world's first natural ice half-pipe track in about 1870. Still in operation as of 2014, this has served as a host track during two Winter Olympics. As one of the few natural weather tracks in the world, it does not use artificial refrigeration. Badrutt's satisfied guests eventually enabled him to build the Badrutt's Palace Hotel, while holding onto the popular Krup Hotel (which catered to different clientele) and brought competition in as winter tourism in alpine locales became very popular.

The first informal races took place on snow-covered roads. Formal competitions started in 1884 at St. Moritz. It's not known how much the original track evolved in the early years as the three sports matured and stabilized. The first club formed in 1897, and the first purpose-built track solely for bobsleds opened in 1902 outside of St Moritz. Over the years, bobsleigh tracks evolved from straight runs to twisting and turning tracks. The original wooden sleds[2] gave way to streamlined fiberglass and metal ones.

Germany and Switzerland have proven the most successful bobsleighing nations measured by overall success in European, World, World Cup, and Olympic championships. Since the 1990s Germans have dominated in international competition, having won more medals than any other nation. Italy, Austria, USA and Canada also have strong bobsleigh traditions.

Bobsleighs can attain speeds of 150 km/h (93 mph), with the reported world record being 201 km/h (125 mph).[3] However, the United States Bobsled and Skeleton Federation repeatedly rejected this record due to lack of documentation. 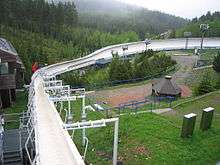 Modern tracks are made of concrete, coated with ice. They are required to have at least one straight section and one labyrinth (three turns in quick succession without a straight section). Ideally, a modern track should be 1,200 to 1,300 metres (3,900–4,300 ft) long and have at least fifteen curves. Speeds may exceed 120 kilometres per hour (75 mph), and some curves can subject the crews to as much as 5 g.

Some bobsleigh tracks are also used for luge and skeleton competition.

The most famous of all the turns is the 'Petersen'. The Petersen is renowned for its trademark 180 degree turn and 270 degree bank angle, which is a compulsory feature on all Winter Olympic runs. The Petersen is named after the pioneer track designer Heidi Petersen.

All modern artificial iced tracks were designed by Udo Gurgel.[4] 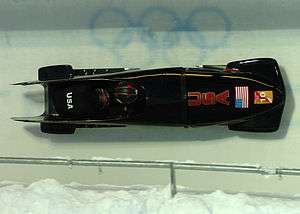 Team USA on a wall, Shauna Rohbock (pilot) and Valerie Fleming (brakes) during their 2006 silver run on Cesana Pariol, Italy.

Modern day sleighs combine light metals, steel runners, and an aerodynamic composite body. Competition sleighs must be a maximum of 3.80 metres (12.5 ft) long (4-crew) or 2.70 metres (8.9 ft) long (2-crew). The runners on both are set at 0.67 metres (2.2 ft) gauge. Until the weight-limit rule was added in 1952, bobsleigh crews tended to be very heavy to ensure the greatest possible speed. Now, the maximum weight, including crew, is 630 kilograms (1,390 lb) (4-man), 390 kilograms (860 lb) (2-man), or 340 kilograms (750 lb) (2-woman), which can be reached via the addition of metal weights. The bobsleighs themselves are designed to be as light as possible to allow dynamic positioning of mass through the turns of the bobsleigh course.[5]

Bobsleigh crews once consisted of five or six friends, but were reduced to two- and four-person sleighs in the 1930s. A crew is made up of a pilot, a brakeman, and, only in 4-man heats, two pushers. Athletes are selected based on their speed and strength, which are necessary to push the sleigh to a competitive speed at the start of the race. Pilots must have the skill, timing, and finesse to steer the sleigh along the path, or, 'line', that will produce the greatest speed.

In modern bobsleighs, the steering system consists of two metal rings that actuate a pulley system located in the forward cowling that turns the front runners. For example, to turn left, the pilot would pull the left ring. Only subtle steering adjustments are necessary to guide the sled; at speeds up to 80 miles per hour (130 km/h), anything larger would result in a crash. The pilot does most of the steering, and the brakeman stops the sled after crossing the finish by pulling the sled's brake lever.

Women compete in Women's Bobsleigh (which is always two-woman), and men in both two and four-man competitions.[6] 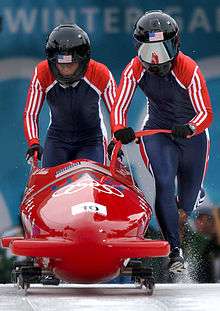 Vonetta Flowers (left) and Jill Bakken power up in the push zone for their 80-mile-per-hour (130 km/h) ride down the Winter Olympic bobsledding track. Bakken, the driver, and Flowers, the brakeman, won the first gold medal presented in Olympic women's bobsledding. (2002)

Individual runs down the course, or "heats", begin from a standing start, with the crew pushing the sled for up to 50 metres (160 ft) before boarding; though the pilot does not steer, grooves in the ice make steering unnecessary until the sled leaves the starting area. While poor form during the initial push can lose a team the heat, it is otherwise rarely, if ever, decisive. Over the rest of the course, a sleigh's speed depends on its weight, aerodynamics, runners, the condition of the ice, and the skill of the pilot.

Race times are recorded in hundredths of seconds, so even seemingly minor errors – especially those at the beginning, which affect the remainder of the heat – can have a measurable impact on the final race standings.

The men's and women's standings for normal races are calculated over the aggregate of two runs or heats. At the Olympic Winter Games and World Championships, all competitions (for both men and women) consist of four heats.

Main article: Bobsleigh at the Winter Olympics
For more details on this topic, see List of Olympic medalists in bobsleigh.