Booker Taliaferro Jones, Jr.[1] (born November 12, 1944) is an American multi-instrumentalist, songwriter, record producer and arranger, best known as the frontman of the band Booker T. & the M.G.'s. He has also worked in the studios with many well-known artists of the 20th and 21st centuries, earning him a Grammy Award for lifetime achievement.[2] 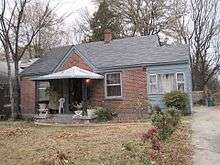 Jones's entry into professional music came at age sixteen, when he played baritone saxophone on Satellite (soon to be Stax) Records' first hit, "Cause I Love You," by Carla and Rufus (Thomas). Willie Mitchell hired Jones for his band, in which Jones started on sax and later moved to bass. It was here that he met Al Jackson, Jr., who he brought to Stax.[4] Simultaneously, Jones formed a combo with White and Porter, in which he played guitar.[3]

While hanging around the Satellite Record Shop run by Estelle Axton, co-owner of Satellite Records with her brother Jim Stewart, Jones met record clerk Steve Cropper, who would become one of the MGs when the group formed in 1962. Besides Jones on organ and Cropper on guitar, Booker T. and the MGs featured Lewie Steinberg on bass guitar and Al Jackson, Jr. on drums (Donald "Duck" Dunn eventually replacing Steinberg). While still in high school, Jones co-wrote the group's classic instrumental "Green Onions," which was a massive hit in 1962.

[His] musical talents became apparent at a very early age. By the time he entered high school, Booker was already a semi-professional, and quickly recognized as the most talented musician in his school. He was appointed director of the school band for four years, and in addition, organized the school dance orchestra which played for proms throughout the Mid-South. In the classroom, he concentrated on the studies of music theory and harmony. ... Booker's multiple activities earned him a coveted honour, that of being listed in the students' "Who's Who of American High Schools." Booker's first instrument was the string bass, but he soon switched to the organ. Booker came to the attention of record executive Jim Stewart in Memphis, and while still in high school he worked as a staff musician for Stax Records, appearing as sideman on many recording dates for that label. It became obvious that one day Booker would be ready to record under his own name and several months later Booker's first recording session was set.

Over the next few years, Jones divided his time between studying classical music composition, composing and transposition at Indiana University, playing with the MGs on the weekends back in Memphis,[5] serving as a session musician with other Stax acts, and writing songs that became widely regarded as classics. He wrote, with Eddie Floyd, "I've Never Found a Girl (To Love Me Like You Do)," Otis Redding's "I Love You More Than Words Can Say," and, with William Bell, bluesman Albert King's "Born Under a Bad Sign" (later popularized by the cover version recorded by the British power trio Cream).

In 1970, Jones moved to California and stopped playing sessions for Stax after becoming frustrated with Stax's treatment of the MGs as employees rather than musicians. Even though Jones was given the title of Vice President at Stax before leaving, as he put it, "There were titles given (to us) but we didn't actually make the decisions."[6] While still under contract to Stax, he appeared on Stephen Stills's eponymous album (1970). The 1971 album Melting Pot would be the last Booker T. & the MGs album issued on Stax.

Jones was married to Priscilla Coolidge in 1969, sister of singer Rita Coolidge. He produced Priscilla's first album Gypsy Queen in 1970; then the pair collaborated as a duo on three albums: 1971's Booker T. & Priscilla, 1972's Home Grown, and 1973's Chronicles, and Jones produced Priscilla's final solo album, Flying, in 1979 right as their marriage ended that year.[7]

Making the charts as a solo artist in 1981 with "I Want You," he produced an album by Rita Coolidge, plus Bill Withers's debut album Just As I Am (on which Jones also played several instruments), and Willie Nelson's album Stardust. Jones has also added his keyboard playing to artists ranging from the R&B/pop/blues of Ray Charles to the folk rock/country rock of Neil Young.

On June 18, 1985, Jones married Nanine Warhurst. They have three children together, and an additional five stepchildren from their prior relationships.

Jones was inducted into The Rock and Roll Hall of Fame in 1992, and was honored with a Grammy Award for Lifetime Achievement on February 11, 2007.[8]

In 2007, Jones was also inducted into the Musicians Hall of Fame and Museum in Nashville. 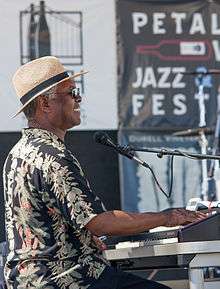 In 2009 he released a new solo album, Potato Hole, recorded with the Drive By Truckers,[9] and featuring Neil Young. He performed at the Bonnaroo Festival with Drive By Truckers on June 6, 2009, with a set including most tracks from Potato Hole as well as some Truckers tracks. On January 31, 2010, Potato Hole won the Best Instrumental Album award at the 52nd Grammy Awards.

He is featured on the new Rancid album, Let the Dominoes Fall, playing a Hammond B-3 organ on the track "Up To No Good."

Jones also played his B-3 on the track "If It Wasn't For Bad" from the Elton John and Leon Russell collaboration album titled The Union. The track was nominated at the 53rd Annual Grammy Awards for Best Pop Collaboration With Vocals.

On February 12, 2012, The Road from Memphis won at the 54th Grammy Awards for Best Pop Instrumental Album. Jones holds a total of four Grammy Awards.

Jones received an honorary doctorate degree from Indiana University's Jacobs School of Music at its 2012 undergraduate commencement. Jones originally attended Indiana University in the 1960s, even staying after his smash-hit Stax Records recordings.

Jones was featured on organ for singer Kelly Hogan on Hogan's 2013 release on Anti- Records, I Like to Keep Myself in Pain.