Not to be confused with Music session. 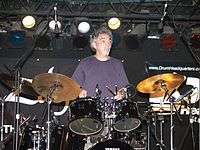 Steve Gadd is a session musician who has been hired to play drums in many studio recordings in a large range of styles including jazz, rock, fusion and R&B.

Session musicians, also called studio musicians, are professional instrumental performers who can be hired to play at live performances or in recording sessions. Many session musicians specialize in playing rhythm section instruments such as electric guitar, piano, electric bass, double bass, or drum kit. Some session musicians "double" on multiple instruments, such as electric bass and double bass or keyboards and guitar, a skill that enables them to play in a wider range of musical styles. Usually such musicians are not permanent members of a musical ensemble with the singers/soloists that they are accompanying and they often do not achieve individual fame in their own right as soloists or bandleaders. However, some backing bands of session musicians have become well known (e.g., The Wrecking Crew).

The term is applied to performers working in many musical styles, ranging from rock, R&B and soul music to country music. Versatility and excellent technique (having strong rhythmic sense, playing notes and chords correctly, excellent intonation, etc.) are two of the most important skills of session musicians, as they may have to perform songs, tunes and pieces from a range of different styles in a range of different settings, often with little or no rehearsal time or personal practice time. As well,session musicians have an extensive knowledge of musical styles and idioms.

For example, an electric guitarist recording a session is able to play stylistically appropriate chord voicing and "fills" in a 1930s Big Band jazz style, a 1940s Bebop jazz approach, a country music style and a hard rock style. Session musicians are expected to learn parts rapidly and they are often skilled in both sight reading and improvising chords or a bassline (depending on their instrument) from a lead sheet or chord chart (or, in country music, a song chart in the Nashville number system). Session players can often play in a range of musical styles. Thus, if a record producer needs to record the basslines for a group of songs in a range of styles (rock, R&B, country, jazz, etc.), she can do so by hiring a single session bassist. Session musicians can play accompaniment parts and solos that are either written out, learned "by ear" from a CD or record or improvised.

During the 1920s and 1930s most record companies had their own prolific "studio bands" turning out records of the latest pop hits. These were often made up by jazz and dance band musicians who were at the same time members of regular working bands and who divided their time between studio work (recordings as well as broadcasting) during the day and live performances in the evenings. Notable such "studio musicians" include Tommy and Jimmy Dorsey, Benny Goodman, Teddy Wilson, Oscar Peterson, Jack Teagarden, Red Nichols, Miff Mole, Andy Sannella, and Mike Mosiello.

Perhaps the best-known session band are Booker T & The MGs who were the house band at Stax records in Memphis during the 1960s and 1970s playing behind Otis Redding, Eddie Floyd, Sam and Dave, Isaac Hayes and The Staple Singers amongst many others. MGs guitarist Steve Cropper co-wrote many of Redding's hits and the MGs produced albums and hit singles such as "Green Onions" in their own right while being the house band at Stax.

Although session musicians have long and successful careers and can achieve considerable fame within the music industry, they rarely achieve popular celebrity. Notable exceptions include the members of the band Toto who met in various recording sessions; John Paul Jones and Jimmy Page, who were well known as session musicians and arrangers before their later success with Led Zeppelin; keyboardist Rick Wakeman; and renowned vocalists Valerie Simpson, Lisa Fischer[1] and Luther Vandross. The song "A Little Green Rosetta" from the Frank Zappa album Joe's Garage lampoons Steve Gadd's status as one of the highest-paid session drummers in popular music.[2]

Among the most prolific established studio musicians are The Wrecking Crew. Based in Los Angeles, the Wrecking Crew has recorded innumerable songs and albums since the 1960s.

The Funk Brothers were session musicians who performed the backing to many Motown Records recordings from the late 1950s to the early 1970s as well as a few non-Motown recordings, notably on Jackie Wilson's "(Your Love Keeps Lifting Me) Higher and Higher."

The legendary Billy Preston was a session musician who played with Mahalia Jackson and was known as the 'fifth' Beatle for his work with the Beatles.

The Los Angeles singer/songwriter scene associated with the Troubadour nightclub and Laurel Canyon in the late 1960s to mid-1970s was supported by musicians Russ Kunkel, Danny Kortchmar, Leland Sklar and Craig Doerge. This session combo, nicknamed The Section or The Mafia, backed many musicians, among others: Carole King, James Taylor, Jackson Browne, Warren Zevon, Kris Kristofferson and David Crosby.

A few session musicians have even built reputations of notoriety: English session singer Tony Burrows appeared so often as a frontman for various one-hit wonder studio groups (such as Edison Lighthouse, The Flower Pot Men, The Pipkins, The Brotherhood of Man, White Plains, and The First Class), in a short period of time during the early 1970s, that his attempts at a solo career under his own name were hampered, due in part to burnout.

Another well-known group of session musicians is called The Nashville A-Team and is made up of A-list studio musicians who recorded during the Nashville sound era. Their contributions began in the 1950s with artists such as Elvis Presley. Some of these musicians are still alive today. The original A-Team includes bassist Bob Moore; guitarists Grady Martin, Hank Garland, Ray Edenton, and Harold Bradley; drummer Buddy Harman; pianists Floyd Cramer and Hargus "Pig" Robbins; fiddler Tommy Jackson; steel guitarist Pete Drake; harmonicist Charlie McCoy; saxophonist Boots Randolph; and vocal groups The Jordanaires and The Anita Kerr Singers.

The Muscle Shoals Rhythm Section comprising Barry Beckett, Roger Hawkins, David Hood, and Jimmy Johnson, also known as the Swampers, is another well-established group of session musicians. They have become known for the "Muscle Shoals Sound." Many of the recordings done in the Memphis area, which included Muscle Shoals, Alabama, used The Memphis Horns in their arrangements. MFSB was a group of soul music studio musicians based in Philadelphia at the Sigma Sound Studios; they later went on to become a name-brand instrumental group, and their best known hit was "TSOP (The Sound of Philadelphia)," better known as the theme from Soul Train.