Borassus flabellifer is a robust tree and can reach a height of 30 metres (98 ft). The trunk is grey, robust and ringed with leaf scars; old leaves remain attached to the trunk for several years before falling cleanly. The leaves are fan-shaped and 3 m (9.8 ft) long, with robust black teeth on the petiole margins. Like all Borassus species, B. flabellifer is dioecious with male and female flowers on separate plants. The male flowers are less than 1 cm long and form semi-circular clusters, which are hidden beneath scale-like bracts within the catkin-like inflorescences. In contrast, the female flowers are golfball-sized and solitary, sitting upon the surface of the inflorescence axis. After pollination, these blooms develop into fleshy fruits 15–25 cm wide, each containing 1-3 seeds. The fruits are black to brown with sweet, fibrous pulp and each seed is enclosed within a woody endocarp. Young palmyra seedlings grow slowly, producing only a few leaves each year (establishment phase), but at an as yet undetermined time, they grow rapidly, producing a substantial stem.[6] 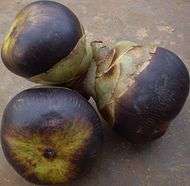 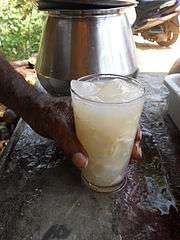 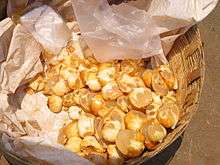 The fruit measures 10 cm (3.9 in) to 18 cm (7.1 in) in diameter, has a black husk, and is borne in clusters. The top portion of the fruit must be cut off to reveal the sweet jelly seed sockets, translucent pale-white, similar to that of the lychee but with a milder flavor and no pit. The sweet jelly seed sockets occur in combinations of two, three or four seeds inside the fruit. The jelly part of the fruit is covered with a thin, yellowish-brown skin. These are known to contain watery fluid inside the fleshy white body. These seed sockets have been the inspiration behind certain sweets Sandesh called Jalbhara (জলভরা) found in Bengal.

The conventional way this fruit is eaten is when the outer casing is still unripe while the seeds are eaten as the fruit. But if the entire fruit is left to ripen, the fibrous outer layer of the palm fruits can also be eaten raw, boiled, or roasted. When this happens, the fruit takes a purple-blackish hue and tastes similar to a Mango. The skin is also eaten as part of the fruit similar to how mango skins are often consumed along with the fruit. Bengali People have perfected the art of making various sweet dishes with the yellowish viscous fluidic substance obtained from a ripe palm fruit. These include Mustard oil fried Taler Bora,tastes best when fried in Sunflower oil (তালের বড়া), or mixed with thickened milk to form Taal-kheer (তাল ক্ষীর).

Obtaining the sap traditionally involves tapping the top shoots and collecting the dripping juice in hanging earthen pots. The juice so collected before morning is refreshing and light drink called Thaati Kallu (తాటి కల్లు) in Telugu, Neera (नीरा) in Marathi and "Pathaneer" (பதநீர்) in Tamil is extremely cool in sensation, and has a sugary sweet taste. The juice collected in evening or after fermentation becomes sour, and is called Tadi (ताडी) in Marathi. Tadi is consumed mostly by coastal villagers Maharashtra as a raw alcoholic beverage.

A sugary sap called toddy, can be obtained from the young inflorescence, either male or female. Toddy is fermented to make a beverage called arrack, or it is concentrated to a crude sugar called jaggery or Taal Patali (তাল পাটালী) in Bengali and Pana Vellam or Karuppukatti (கருப்புகட்டி or கருபட்டி) in Tamil. It is called Gula Jawa (Javanese sugar) in Indonesia, and is widely used in Javanese cuisine. In addition, the tree sap is taken as a laxative, and is believed to possess medicinal virtues that have also been ascribed to other parts of the plant.

In the Indian states of Tamil Nadu, Andhra Pradesh, Telangana and Bihar, and in Jaffna, Sri Lanka, the seeds are planted and made to germinate and the fleshy stems (below the surface) are boiled or roasted and eaten. It is very fibrous and nutritious. It is known as Thegalu (తేగలు) or Gaygulu (గేగులు) or Gengulu (గెంగులు) (especially in Telangana) in Telugu, as Panai Kizhangu or Panangkizhangu (பனங்கிழங்கு) in Tamil, and as htabin myiq (ထန်းပင်မြစ်) in Myanmar.

The germinated seed's hard shell is also cut open to take out the crunchy kernel, which tastes like a sweeter water chestnut. It is called Buragunju (బురగుంజు) in Telugu and "thavanai" in Tamil.

The white kernel of the ripe palm fruit after being left for a few months is used as an offering in Lakshmi Puja in various parts of Bengal and is also eaten raw. 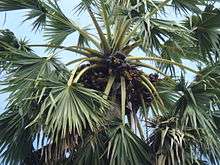 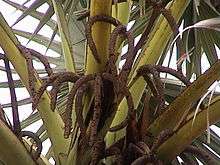 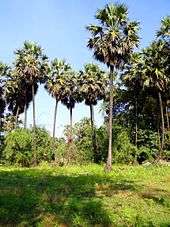 All the literature of the old Tamil was written in preserved Palm leaves also known as Palm-leaf manuscript. In Tamil Yaedu or Olai chuvadi. It was written with a sharpened iron piece called an Eluthani (எழுத்தாணி in Tamil). . Most of the ancient literature in Telugu are written on palm leaves (Tala patra grandhas). http://thanjavur.nic.in/sml/library/Departments/Manuscripts/manuscripts.html

In Indonesia the leaves were used in the ancient culture as paper, known as "lontar". Leaves of suitable size, shape, texture, and maturity were chosen and then seasoned by boiling in salt water with turmeric powder, as a preservative. The leaves were then dried. When they were dry enough, the face of the leaf was polished with pumice, cut into the proper size, and a hole made in one corner. Each leaf made four pages. The writing was done with a stylus and had a very cursive and interconnected style. The leaves were then tied up as sheaves.

The stem of the leaves has thorny edges (called "karukku" in Tamil). Fences can be prepared from these stems by nailing them together.

The skin of the stem can be peeled off and be used as rope and also used to weave into cots (நாற்கட்டில் in Tamil). In some part of Tamil Nadu, a variety of rice flour cake (called "Kolukattai") is prepared using the leaf.

In the eastern part of India, the leaves are used to make hand fans. These are mostly used during the summer in parts of Assam and West Bengal.

The stalks are used to make fences and also produce a strong, wiry fiber suitable for cordage and brushes. The black timber is hard, heavy, and durable and is highly valued for construction. In Cambodia, the trunks are also used to make canoes.

The young plants are cooked as a vegetable or roasted and pounded to make meal.

When the crown of the tree is removed, the segment from which the leaves grow out is an edible cake. This is called thati adda (తాటి అడ్డ/తాటి మట్ట) in Telugu or pananchoru (பனஞ்சோறு) in Tamil.

Palmyra Tuber Palmyra tuber has 98% fibre which means up to 95% is starch content.

Borassus flabellifer has a growth pattern, very large size, and clean habits that make it an attractive ornamental tree, cultivated for planting in gardens and parks as landscape palm species. 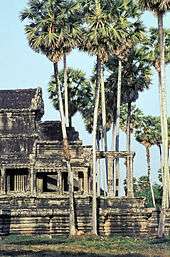