Not to be confused with pomace. 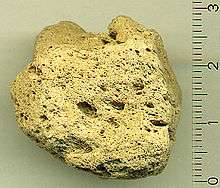 Pumice (pronunciation: /ˈpʌmᵻs/), called pumicite in its powdered or dust form, is a volcanic rock that consists of highly vesicular rough textured volcanic glass, which may or may not contain crystals. It is typically light colored. Scoria is another vesicular volcanic rock that differs from pumice in having larger vesicles, thicker vesicle walls and being dark colored and denser.[1][2]

Pumice is created when super-heated, highly pressurized rock is violently ejected from a volcano. The unusual foamy configuration of pumice happens because of simultaneous rapid cooling and rapid depressurization. The depressurization creates bubbles by lowering the solubility of gases (including water and CO2) that are dissolved in the lava, causing the gases to rapidly exsolve (like the bubbles of CO2 that appear when a carbonated drink is opened). The simultaneous cooling and depressurization freezes the bubbles in a matrix. Eruptions under water are rapidly cooled and the large volume of pumice created can be a shipping hazard for cargo ships.[3]

Pumice is composed of highly microvesicular glass pyroclastic with very thin, translucent bubble walls of extrusive igneous rock. It is commonly,[4] but not exclusively of silicic or felsic to intermediate in composition (e.g., rhyolitic, dacitic, andesite, pantellerite, phonolite, trachyte), but basaltic and other compositions are known. Pumice is commonly pale in color, ranging from white, cream, blue or grey, to green-brown or black. It forms when volcanic gases exsolving from viscous magma form bubbles that remain within the viscous magma as it cools to glass. Pumice is a common product of explosive eruptions (plinian and ignimbrite-forming) and commonly forms zones in upper parts of silicic lavas. Pumice has an average porosity of 90%, and initially floats on water.

Scoria differs from pumice in being denser. With larger vesicles and thicker vesicle walls, it sinks rapidly. The difference is the result of the lower viscosity of the magma that forms scoria. When larger amounts of gas are present, the result is a finer-grained variety of pumice known as pumicite. Pumice is considered a glass because it has no crystal structure. Pumice varies in density according to the thickness of the solid material between the bubbles; many samples float in water. After the explosion of Krakatoa, rafts of pumice drifted through the Pacific Ocean for up to 20 years, with tree trunks floating among them.[5] In fact, pumice rafts disperse and support several marine species.[6] In 1979, 1984 and 2006, underwater volcanic eruptions near Tonga created large pumice rafts, some as large as 30 kilometers (19 mi) that floated hundreds of kilometres to Fiji.[7]

There are two main forms of vesicles. Most pumice contains tubular microvesicles that can impart a silky or fibrous fabric. The elongation of the microvesicles occurs due to ductile elongation in the volcanic conduit or, in the case of pumiceous lavas, during flow. The other form of vesicles are subspherical to spherical and result from high vapor pressure during eruption.

Pumice is widely used to make lightweight concrete or insulative low-density cinder blocks. When used as an additive for cement, a fine-grained version of pumice called pozzolan is mixed with lime to form a light-weight, smooth, plaster-like concrete. This form of concrete was used as far back as Roman times. Roman engineers used it to build the huge dome of the Pantheon and as construction material for many aqueducts.

It is also used as an abrasive, especially in polishes, pencil erasers, cosmetic exfoliants, and the production of stone-washed jeans. "Pumice stones" are often used in beauty salons during the pedicure process to remove dry and excess skin from the bottom of the foot as well as calluses. It was also used in ancient Greek and Roman times to remove excess hair.[8] Finely ground pumice is added to some toothpastes and heavy-duty hand cleaners (such as Lava soap) as a mild abrasive. Pumice is also used as a growing substrate for growing horticultural crops. Some brands of chinchilla dust bath are made of powdered pumice.

Owing to its high demand particularly for water filtration, chemical spill containment, cement manufacturing, horticulture and increasingly for the pet industry, the mining of pumice in environmentally sensitive areas has been under more scrutiny after such an operation was stopped in the U.S. state of Oregon, at Rock Mesa in the southern part of the Three Sisters Wilderness.[9]

Pumice is mixed with soil to provide good aeration for the plants. It is also used for hydroponics as a soilless growing medium.