Ahmed Boughèra El Ouafi (Arabic: أحمد بوغيرا العوافي‎‎) (October 15, 1898 – October 18, 1959) was an Algerian athlete during the time Algeria was part of France. In 1928, he won the Olympic gold medal in the marathon. 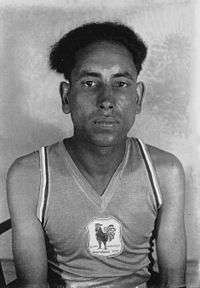 El Ouafi was born in the town of Ouled Djellal, joining the French military regiment later (at that time, Algeria was part of French Algeria). One of his superior officers noticed El Ouafi's outstanding athletic abilities, and decided to send him to a military sports competition in France. He made a good impression there, and was allowed to enter qualification for the 1924 Summer Olympics in Paris in the marathon event.

Boughèra El Ouafi managed to qualify, and completed his first Olympic marathon, running for France, in seventh position. This good result allowed him to prepare more extensively for the next Games, held in Amsterdam. In the 1928 competition, he ran behind the leaders for the first three quarters of the race, overtaking them some 5 km before the end. He was never caught by any of the other runners, and finished first, 26 seconds ahead of second-placed Manuel Plaza from Chile.

After his surprise victory, El Ouafi toured the United States. However, the money he earned with this trip disqualified him as an amateur, causing him to leave the sport, and he opened a cafe in Paris. El Ouafi remained forgotten until 1956, when another Algerian, Alain Mimoun, also won the Olympic marathon. Reporters went to seek out the other Algerian who had won 28 years earlier, and found him a pauper.

El Ouafi was killed while in a café, three days after his 61st birthday, by members of the National Liberation Front after he had refused to support them.