This is a Korean name; the family name is Sohn.

He competed under the Japanese name Son Kitei, as Korea was part of the Japanese Empire at the time.[3] The name is based on the Japanese kanji pronunciation of his Korean hanja name, both are written the same.

Sohn Kee-chung was born in Sinuiju (Sinuiju), North P'yŏngan Province, North Korea, occupied by Japan at the time. He studied at Yangjeong High School (양정고등학교) in Seoul and Meiji University in Tokyo, where he graduated in 1940.

Son first competed in the 1,500 and 5,000 m, but turned to longer distances after winning an 8-mile race in October 1933. Between 1933 and 1936, he ran 12 marathons; he finished within the first three places on all occasions and won nine of those races.[3] On November 3, 1935 in Tokyo, Japan, Sohn Kee-chung set a world record in the marathon with a time of 2h26:42.[4][5] According to the International Association of Athletics Federations, this record remained unbroken until Sohn's own trainee, Suh Yun-Bok, won the 1947 Boston marathon.[4][6]

Sohn, who was competing for the Empire of Japan, won the gold medal at the 1936 Summer Olympics in the marathon. He ran the 42.195 kilometres (26.219 mi) course in 2h29:19.2, breaking the Olympic record. His Korean teammate Nam Sung-yong took the bronze medal. As Korea was under Japanese occupation at the time, the International Olympic Committee (IOC) officially credited Japan with Sohn's gold and Nam's bronze in the 1936 Summer Olympics medal count.

On December 9, 2011, the IOC recognized Sohn's Korean nationality by fixing his official profile. It cited his efforts to sign his Korean name and stressing Korea's status as a separate nation during interviews. The move was part of the Korean Olympic Committee's repeated requests to acknowledge Sohn's background. However, the IOC ruled out changing the nationality and registered name per official records to prevent historical distortions.[7]

Under orders from Tokyo, Sohn Kee-chung had to compete using the Latin alphabet name of Son Kitei. It is the romanization of Japanese pronunciation of 孫基禎, his Korean name in hanja.[8]

Sohn refused to acknowledge the Japanese anthem while it was played at his award ceremony and later told reporters that he was ashamed to run for Japan.[3] When the Dong-a Ilbo published a photograph of Sohn at the medal ceremony, it altered the image to remove the Japanese flag from his running tunic. The act enraged the Japanese Governor-General of Korea Minami Jiro in Seoul. The Kempetai military police imprisoned eight people connected with the newspaper and suspended its publication for nine months.[9][10] 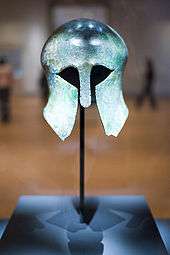 The Corinthian helmet that was awarded to Sohn Kee-chung, on display at the National Museum of Korea.

For winning the marathon, Sohn was to have received an ancient Corinthian helmet (circa BCE 800–700), which was discovered at Olympia, Greece, and later purchased by a newspaper in Athens for giving it as an Olympic award. However, the IOC believed that presenting such a valuable gift would violate its amateur rules. Thus the helmet was placed in a Berlin museum where it remained for fifty years. It was finally presented to Sohn in 1986.[11][12] On March 7, 1987, the helmet was categorised as the 904th treasure of South Korea. There was initially a plan to award replicas of this helmet to the winners of the 2006 Sohn Kee-chung marathon,[13] but winners got only chance to wear that replica.[14]

Sohn spent the remainder of his career in South Korea coaching other notable runners such as Suh Yun-Bok, the winner of the Boston Marathon in 1947;[3] Ham Kee-Yong, winner of the Boston Marathon in 1950; and Hwang Young-Cho, who was the gold medalist of the 1992 Summer Olympics marathon, and whom Sohn Kee-chung especially went to Barcelona to see. Sohn also became the Chairman of the Korean Sporting Association. At the 1988 Summer Olympics in Seoul, he was given the honor of carrying the Olympic torch into the stadium at the opening ceremony.[3][15]

He authored an autobiography entitled My Motherland and Marathon (나의조국과 마라톤).

He was honoured with the Korean Order of Civil Merit (Hangul:국민훈장).

Sohn Kee-chung died at midnight on November 15, 2002 from pneumonia. He was buried at the Daejeon National Cemetery. The Sohn Kee-chung Memorial Park in Seoul was established in his honor.[15] He was also posthumously made a Grand Cordon (Blue Dragon) of the Order of Sport Merit.

The historical Korean drama Bridal Mask (각시탈) referenced Sohn Kee-chung's Olympic win and the subsequent arrest of Korean journalists in its twenty-first episode.[16] In a parade scene, spectators waved Japanese flags to a Korean boxer parading through on a jeep. Despite the joyous occasion, the boxer's face remained staid, never smiling, with the Japanese flag put onto his shirt. The boxer recently won an international sports title, a first for a Korean. However, due to the Japanese occupation, the boxer represented Japan, rather than Korea, and the Empire of Japan claimed that victory.

As the parade continued, suddenly, spectators unveiled their Korean flags, which they got the night before, waved them, and shouted for Korea. In solidarity with the crowd, the boxer then ripped the Japanese flag from his shirt. With tearful eyes and a determined face, he raised his fists and repeatedly cheered with the crowd, "Manseh!", a pro-Korean independence slogan.

Reporter Song took a picture of this emotional scene. The picture appeared in the newspaper's front page the next day, and government officials learned about this incident. The picture also angered Kimura, a high-ranking police officer. At the police station, he ordered officers to arrest the boxer and punish him harshly for disrespecting Japan. Consequently, the police arrested him and the journalists, and the government closed the newspaper.