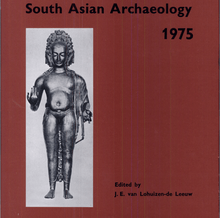 The Brahma from Mirpur Khas is a famous bronze image of the Brahma made in Sindh, in modern Pakistan, dated to the 5th or 6th century, during the Gupta period.[1] It is the earliest known [2] metallic image of Lord Brahma and the only known representative if the school it represents.[3] It has been described as "an immense artistic creation" of the Gupta period.[4]

It was found in a field near Mirpur-Khas as first reported by Henry Cousens in 1929.[5][6] Some report it as having been found at Brahmanabad.[7]

The four-headed Brahma bronze statue has a height over 3 feet. Lord Brahma is shown standing with two hands, wearing a dhoti and a yajnopavita but without any ornaments.[8]Vasudeva Sharana Agrawala calls it "an exceptionally good specimen of the art of metal-casting in this period".[9] Śrīrāma and Śaṅkara Goyala term is "true memorial of Gupta metalsmith's artistic genius".[10] It is said to the best example of Gupta art in Sindh.[11]

The object suggests that Sindh was a major center of metalworking.[12]

It used to be at the Karachi Museum, but it is reported that it is no longer there.[13]

Brahma from Mirpur Khas has been widely used by art historians for comparison with other artwork of historical significance.[14]