The Sultanganj Buddha is a Gupta-Pala transitional period sculpture, the largest substantially complete copper Buddha figure known from this time. The statue is dated by archaeologists to between 500 and 700 AD. It is 2.3m high and 1m wide, weighs over 500 kg. It was found in the North Indian town of Sultanganj, Bhagalpur district, Bihar[1] in 1861 during the construction of the East Indian Railway.[2] It is now held by Birmingham Museum and Art Gallery, Birmingham, England.

The Sultanganj Buddha was cast in pure, but unrefined copper by the cire perdue or lost wax technique. The Buddha statue stands with his right hand raised in abhayamudra (a gesture of reassurance or protection), while his left hand is held downwards with palm outwards, said to indicate granting a favour. The end of the monastic robe is held between the thumb and forefinger of this hand in the manner still practised by Theravadin monks to this day. 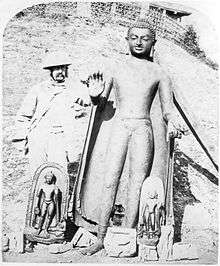 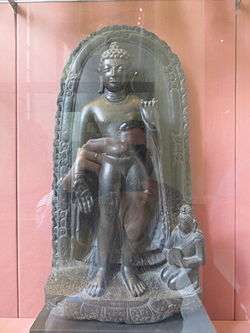 E. B. Harris, the railway engineer who discovered the Buddha during excavations he carried out on ancient remains near the Sultanganj station he was constructing, published a detailed account of his work, complete with a site plan and photographs. He describes finding the right foot of the Buddha ten feet under the surface, beneath a floor he considered to have been used to conceal the statue after it had been toppled from its former place.[3] Harris sent the statue to Birmingham, the cost of its transport to England being paid by Samuel Thornton, a Birmingham manufacturer of ironmongery. Thornton, himself a former mayor of Birmingham, offered it to the Borough Council for their proposed Art Museum in 1864. In Birmingham, a town which boasted a thousand trades, the Art Museum was intended to be an exemplar and inspiration for local metalworkers and other artisans.

Over the years the Buddha has been shown in a number of prominent locations throughout Birmingham Museum and Art Gallery (BMAG) and remains an indispensable display item. It was the foundation donation to the collections and is BMAG's most treasured possession.[4] Harris's report shows him with the Buddha and a number of smaller finds. These included two much smaller standing Buddhas in stone: one is now in the British Museum and the other in the Asian Art Museum of San Francisco. A stone Buddha head, also from Sultanganj, is now in the Victoria and Albert Museum, London.[5][6][7]

Since 1998 the Buddha has been the centrepiece of a Birmingham Museum and Art Gallery exhibit dedicated to celebrating the religious and sculptural heritage of South Asia. Here the Buddha can be viewed from a distance (along the Industrial Gallery), framed in an arch, much as it might once have been seen by pilgrims to the former Buddhist monastery at Sultanganj, before they drew closer. In recent years the Buddha has become the focus for an annual celebration by West Midlands-based Buddhist groups from a range of traditions. Offerings of flowers and fruit are frequently left at his feet.