Branko Grünbaum (Hebrew: ברנקו גרונבאום‎‎; born 2 October 1929) is a Yugoslavian-born mathematician and a professor emeritus at the University of Washington in Seattle. He received his Ph.D. in 1957 from Hebrew University of Jerusalem in Israel.[1] He has authored over 200 papers, mostly in discrete geometry, an area in which he is known for various classification theorems. He has written on the theory of abstract polyhedra.

His paper on line arrangements may have inspired a paper by N. G. de Bruijn on quasiperiodic tilings (the most famous example of which is the Penrose tiling of the plane). This paper is also cited by the authors of a monograph on hyperplane arrangements as having inspired their research. 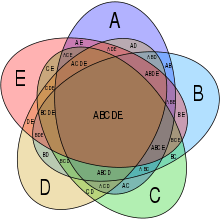 Grünbaum has also devised a multi-set generalisation of Venn diagrams. He is an editor and a frequent contributor to Geombinatorics.

Grünbaum's classic monograph Convex polytopes, first published in 1967, has become the main textbook on the subject. His monograph Tilings and Patterns, coauthored with G. C. Shephard, helped to rejuvenate interest in this classic field, and has proved popular with nonmathematical audiences, as well as with mathematicians.

In 1976 Grünbaum won a Lester R. Ford Award for his expository article Venn diagrams and independent families of sets.[2] In 2004, Gil Kalai and Victor Klee edited a special issue of Discrete and Computational Geometry in his honor, the "Grünbaum Festschrift". In 2005, Grünbaum was awarded the Leroy P. Steele Prize for Mathematical Exposition from the American Mathematical Society. He is a Guggenheim Fellow, a Fellow of the AAAS and in 2012 he became a fellow of the American Mathematical Society.[3][4] Grünbaum has supervised 18 Ph.D.s and currently has at least 98 mathematical "descendants".[1]