For other uses, see Braunfels (disambiguation).

Braunfels is a town in the Lahn-Dill-Kreis in Hesse, Germany. It is located on the German Timber-Frame Road.

The climatic spa of Braunfels lies at a height of some 100 m above the Lahn valley. It is 9 km southwest of Wetzlar, and 28 km northeast of Limburg an der Lahn.

Besides the main town, which bears the same name as the whole, there are outlying centres called Altenkirchen, Bonbaden, Neukirchen, Philippstein and Tiefenbach

Currently, Bonbaden, a picturesque place in the Solmsbach valley, is home to about 1600 people, who maintain a very active club life. Moreover, Bonbaden has a primary school (levels 1-4) and an Evangelical and Catholic church. A cultural highlight is the Freilichtbühne Bonbaden (Bonbaden Open-Air Stage), known far and wide, which presents two different plays for children each summer, and an evening play for adults.

The town and stately seat of Braunfels were first mentioned in 1246. Braunfels has had town rights since 1607. In 1950 Braunfels had a population of 3,337. In the course of municipal reforms, the aforesaid constituent communities, formerly all independent villages, were amalgamated with Braunfels in 1972.

Bonbaden had its first documented mention in 772, and so celebrated 1200 years of existence in 1972. Bonbaden is therefore one of Lahn-Dill's oldest inhabited places.

Schloss Braunfels, a stately home that had been built from a castle built in the 13th century by the Counts of Nassau, served as of about 1260 as the Solms-Braunfels noble family's residential castle. After Solms Castle had been destroyed by the Rhenish League of Towns in 1384, Braunfels Castle became the seat of the Counts of Solms. Over the castle's more than 750-year-long history, building work was done many times. Particularly worthy of mention is the town and castle fire of 1679, which burnt much of Braunfels and its stately seat down. Both were then built into a Baroque residence. Schloss Braunfels was rebuilt out of materials that were still on hand. The town was given a regular marketplace, which is still preserved today and lies before the town wall.

The municipal elections on 26 March 2006 yielded the following results:

Note: FWG is a citizens' coalition.

The town's coat of arms is the same as that used by the Counts of Solms-Braunfels, except that the colours in the lower half are reversed, simply to differentiate the town's arms from the old noble family's. The arms were designed and granted in 1937, and granted again on 14 October 1982. Formerly, the arms were identical to the Counts' arms. 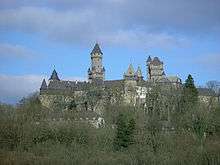 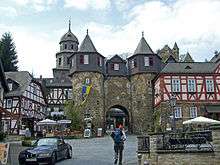 The approach to the Schloss.

Every year, the local Aktionsring Braunfels e.V. organizes the Mittelalterliches Spektakulum, which over several days attracts many tourists, showmen and various "travelling folk" from all over Europe, for which occasion, the spa gardens are turned into one great knightly encampment. 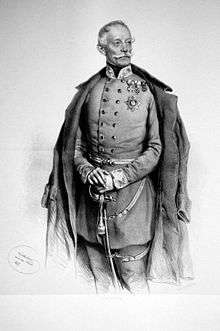