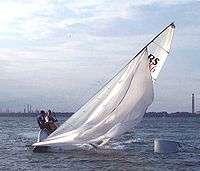 A sailboat broaches when its heading suddenly changes towards the wind due to wind/sail interactions for which the rudder cannot compensate. This happens when the aerodynamic force on the rig greatly exceeds the hydrodynamic force on the hull, due to a sudden increase in wind strength or turbulent sea conditions. In small boats and dinghies, broaching can lead to a death roll. In larger boats broaching can lay the mast horizontal, putting both rig and crew at risk. It can be particularly dangerous when racing other boats at close quarters.

More succinctly, a broach is "to slew around on a wave front."[1] Another source says it is "extremely dangerous" and likens it to turning broadside and losing control in following seas, so as to present the ship's side to oncoming large waves. In that event, the ship may "trip" on its keel, roll, capsize and turn turtle.[2]

Historically, it has been defined as:

"Broach-to. To fly up into the wind. It generally happens when there is considerable sea on, and the ship is carrying a press of canvas with a good deal of after-sail set. When a ship sails with the wind aft, or on the quarter, the wind acts in the direction of the ship s course and the pressure on the sails is very much diminished. If from this position the ship suddenly presents her broadside to the wind, the sails, masts, and rudder will be endangered, and in extreme cases the ship may capsize or be forced down stern foremost. Broaching-to is generally occasioned by the difficulty of steering the ship; by the negligence or incapacity of the helmsman; or by an accident happening to the helm which renders it incapable of governing the ship. See BROUGHT BY THE LEE."[3][upper-alpha 1]

This can cause the boat to enter a Death roll, rolling dangerously and if not controlled may lead to a capsize and turning turtle

Broaching most typically happens when a boat is on a broad reach with spinnaker set and there is an overpowering weather helm.[4] This may be due to excessive heeling, swell that causes the rudder to be partially lifted out of the water, or because the stem digs into a wave causing a strong lateral force. The boat will come quickly across the wind with too much sail set. It can also happen on a close reach where it is typically precipitated by sudden waves.[5] With an inattentive helmsman it can be a consequence of gybing, which can be a dangerous manoeuvre even when performed under controlled circumstances. When it happens unexpectedly and the helm isn't corrected, the heading of the boat may veer into the wind causing a broach.

Also when sailing on a dead downwind run an inexperienced or inattentive sailor can easily misjudge the real strength of the wind since the boat speed subtracts directly from the true wind speed and this makes the apparent wind less. In addition the sea conditions also falsely seem milder on this point of sail as developing white caps are shielded from view by the back of the waves and are less apparent. When changing course in a brisk wind from a run to a reach or a beat, a sailboat that seemed under control can instantly become over-canvassed and in danger of a sudden broach.

One of the less obvious causes of broaching is an oscillation developed when running downwind.[4] When running dead downwind, the sails are set with an angle of attack of nearly 90 degrees to the wind. The high angle of attack causes turbulent bubbles to form on the leeward side of the sail, and when there is insufficient attached flow to keep these bubbles attached to the sail, they separate. The sudden separation of a turbulent bubble drops the lift of the sail to nearly nothing, which causes the boat to rock slightly. At angles of attack near 90 degrees, lift can generate on the leech, or trailing edge of the sail. As the boat rocks due to separation of turbulent bubbles, a constructive interference is formed, as bubbles begin to shed from alternating sides of the sail. Once started, the oscillation builds quickly, especially in modern ultra-light displacement centerboard boats and sportsboats, which lack the damping effects of a large keel. Once this oscillation reaches a certain point, the extreme change in heel angle will cause the boat to broach. Spinnakers generate lift from the top, rather than the side, and thus they are less prone to this form of broaching than other modern sail types. Square rigged vessels also generate lift from the tops of their sails, which in fact, combined with the large keels they traditionally use, makes them immune to this type of broaching.

Another cause of broaching is encountered in heavy seas and high winds. If the bow of the yacht is not kept pointed into the waves, then the waves will push the bow aside, turning the boat side-on to the waves. Once side-on to the waves, the waves will roll the yacht side to side violently, causing severe discomfort to the crew, and the yacht may broach and may even capsize. Since a sailing ship cannot steer unless the sails are providing forward motion, and since heavy seas are most often from the same direction as the wind, a sea anchor may be used at the bow in extreme weather to keep the bow pointed into the wind and waves. See heaving to as a storm tactic.

The key to stopping or rescuing a broach is to depower the sails at the first opportunity. This may be done by releasing the main or jib sheet by a foot or more or by releasing the boom vang (kicking strap) which will spill wind out of the top of the mainsail. The main means of preventing a broach is to ensure that the amount of sail set is reduced to suit the sailing conditions.